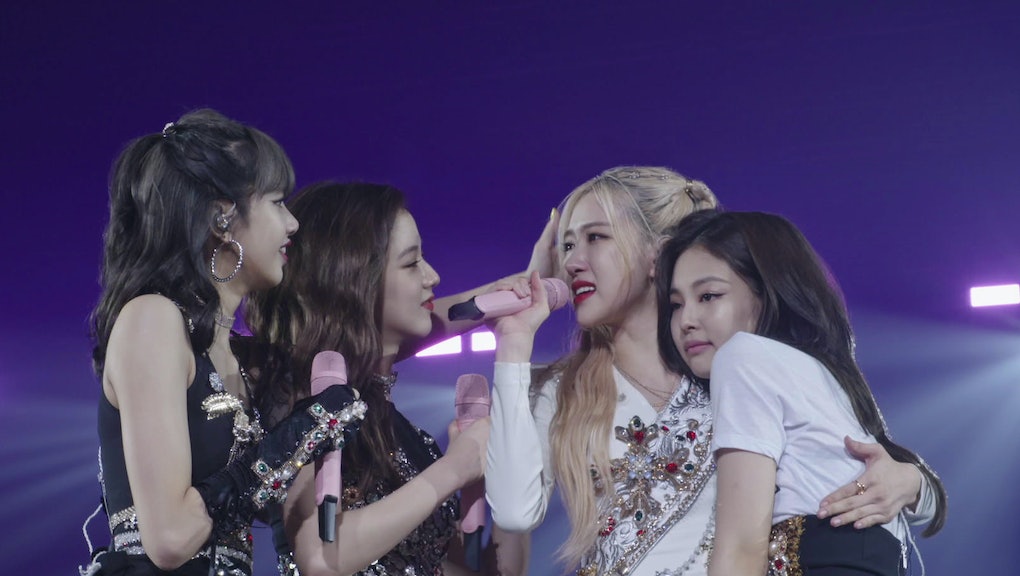 The Blackpink documentary finally got me into K-Pop

For the longest time, I couldn’t get into K-pop. Like the dumb, monolingual American that I am, I was wary of the language barrier, I guess. I like understanding music and being able to sing along, so how would I fall in love with an artist if I didn’t know what they were saying? Well, watching the new Netflix documentary about mega-famous K-pop girl group Blackpink proved just how closed-minded I was acting. Call me a “Blink,” because I’m now officially a stan.

The film, directed by Caroline Suh (Salt Fat Acid Heat), humanizes the four performers that make up Blackpink, introducing viewers to the young women behind the “idols” and centering their friendship as the bedrock of their success. It’s also a tantalizingly glamorous peek at what life is like when you’re adored by an international fandom of millions. Blackpink: Light Up the Sky is like a backstage pass for fans of the girl group, offering a glimpse at the day-to-day existence of four artists on the precipice of global superstardom.

On one hand, the fact that I fell so completely in love with Blackpink after watching their Netflix documentary proves what a successful film Suh made. Once I was inducted into the fandom, I realized that the things that endeared Jennie, Rosé, Jisoo, and Lisa to me are the same aspects that make their army of “Blinks” so obsessed. Whereas Blackpink can seem like a bit of a monolith at first blush — the four women are almost the exact same size and shape, all performing the same complex choreography in perfect sync — Blackpink: Light Up the Sky presents each singer as an individual, giving them a platform to tell their own unique stories.

The documentary splices intimate interviews with each member with on-the-go, fly-on-the-wall footage chronicling the group’s preparations for their de-facto North American coming-out party — their 2019 performance at Coachella. K-pop newbies, especially, are introduced to Blackpink’s international composition: Rosé grew up in New Zealand and Lisa is Thai, whereas Jisoo and Jennie were both born and raised in South Korea. Each performer has their own unique talents and personal style that separates them from their peers, too. Lisa is the rapper and de-facto dance captain, whereas Rosé spends her downtime writing songs, for example. By focusing on the women as individuals, Suh lets their personalities emerge from the K-pop industrial complex. Blackpink’s music is catchy as heck, but I’m not sure I could’ve gotten as fully into the group without supplementary information about its members.

This all makes sense in an age when influencers rule pop culture, right? Rosé, Jennie, Lisa, and Jisoo were each chosen to be in Blackpink because they’re talented performers. But the documentary makes it clear that these four women brought something else to the table — something intangible and aspirational. Melody Kim, a community manager at K-pop fansite Soompi, explained the ideal dynamic to The New Yorker in 2012: “The members of a group shouldn’t be completely alike and indistinguishable, but they should be complementary enough so that together they form a really great, cohesive whole.”

We don’t get to see the messy, early days of Blackpink in the documentary, when there were upwards of nine hopefuls all vying for a spot in the girl group. Rather, they’re presented to us as a fully-formed unit — a tight-knit sisterhood that’d be incomplete without one of its members. To that point, Blackpink: Light Up the Sky isn’t at all critical of the K-pop corporate machine that grooms young kids into pop stars. On average, the members of Blackpink spent five years enrolled in K-pop bootcamp, learning the skills they’d need to become international sensations. But the documentary frames the grueling time the members of Blackpink spent as trainees as a necessary gatekeeping process, to separate the cream from the milk, so to speak.

That’s the thing about Blackpink, and K-pop generally, that I can’t quite get over: knowing that entertainment was engineered to be popular makes me feel like I’m being duped somehow. But on the flip side, K-pop isn’t much different from the tunes cranked out by American record labels in the late 1990s and early 2000s, when they’d send the likes of Britney Spears to Sweden to cut tracks with hit-making producers there. All I know for sure is that I’ve willingly spent the last five days of my life obsessively watching Blackpink videos on YouTube. And you know what? I’m really not mad about it.