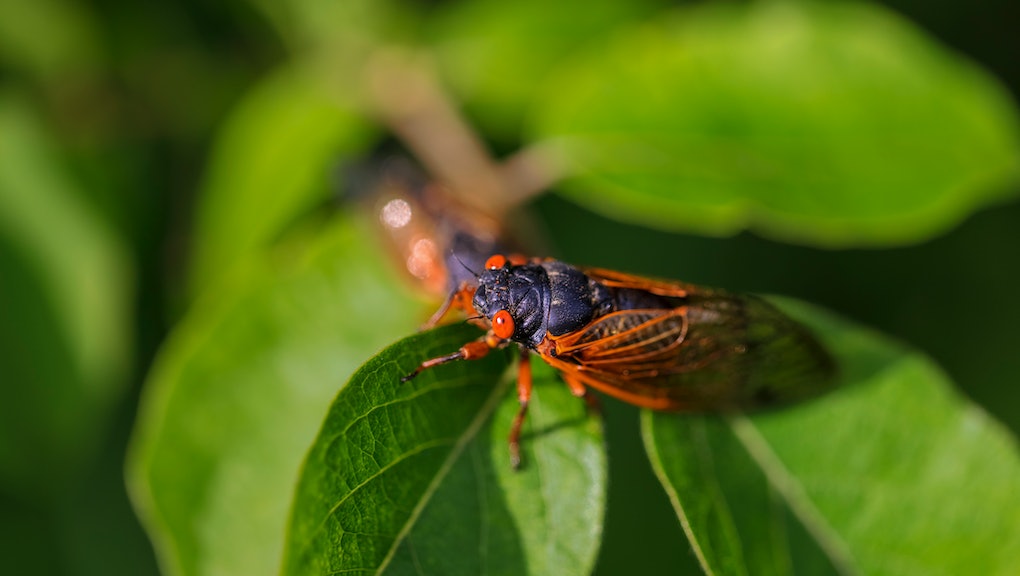 The Brood X cicadas are showing up on weather reports now

Over on the East Coast of the United States, there appears to be rain on the radar, leaving Washington, D.C., and the surrounding area set for a downfall. And it's true area residents may want their umbrellas, but it won't be for the rain. The giant swarms of cicadas, otherwise known as Brood X, that are descending across the East Coast are so dense that in recent days they've been showing up on weather radar. Someone get Weird Al on the line, there is a The Weather Girls parody that is simply begging to be made right now.

Here's the deal with the radar-worthy cicada swarm over the D.C. area: Radar devices send out beams, which are focused pulses of microwave energy, that bounce off an object and provide information about it. When those beams hit a cloud, for instance, sensing instruments can determine particle type — be it rain or snow or hail — as well as movement and intensity, which gives us your typical weather radar forecast. But in this case, the beams are hitting swarms of cicadas that recently emerged from underground.

That's why the radar used by the local NBC news station in Washington, D.C., showed some green patches recently, despite the fact that there was no rain in sight. It's also why the National Weather Service's radar was experiencing "a lot of fuzziness," according to the agency. "Our guess? It's probably the cicadas."

This is not the first time that insects have managed to interfere with radar systems. In fact, it's relatively common; at least, it certainly happens often enough to give a person with entomophobia the chills. Something similar happened on the East Coast in 2019: A radar formation that seemed like cloud coverage was making its way across Virginia and North Carolina, but it turned out to be a big cluster of dragonflies. That same year, a massive swarm of ladybugs, known as a bloom, gave the appearance of a rainstorm passing over San Bernardino County in California. Only instead of rain, it was tons of the little beetles flying about a mile off the ground, creating the appearance of a 10-mile-wide cloud. Another noteworthy incident of radar trickery happened in 2015, when it looked like North Texas was getting rained on. Nope: It was a huge party of grasshoppers and beetles on the move, which created the appearance of cloud cover on the radar for about 50 miles.

Scientists have actually started to use weather radar as a means of tracking insect behavior, creating movement maps and keeping tabs on how big the swarms are. The technology provides insight into their behavior and could help keep tabs on the health of these insect populations as they are invariably affected by climate change. Turns out the reality is when the bugs stop showing up on radar, then we might be in trouble.