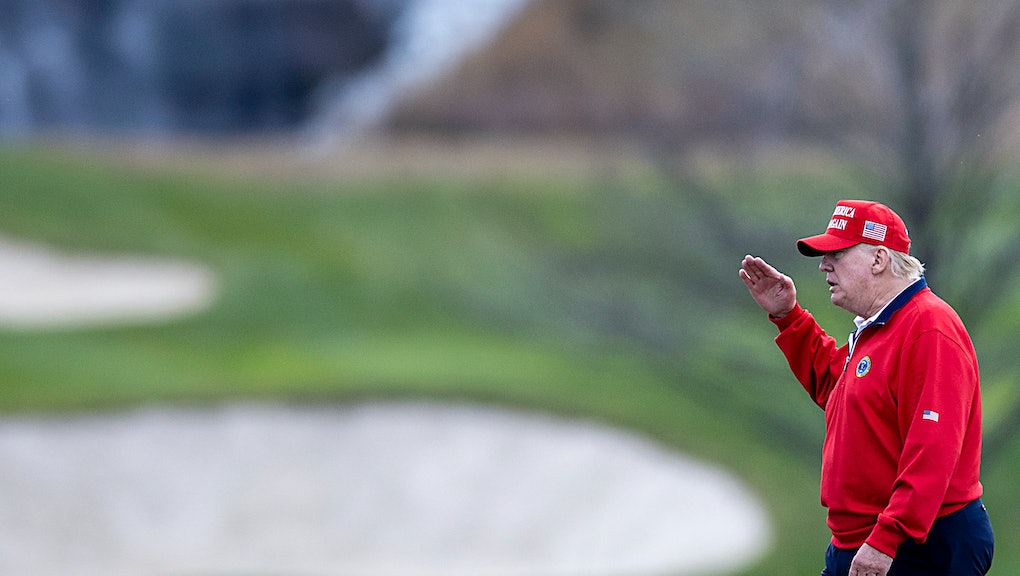 Following the Capitol siege on Wednesday, which claimed five lives and stopped short of becoming something far deadlier, President Trump has been deplatformed from a number of tech outlets. Twitter, Pinterest, YouTube, Snapchat, Twitch, Shopify, Facebook, Letterboxd. Hard as it is to imagine him using all of these, it’s harder to imagine him taking any retaliation more personally than the PGA of America, which voted to take the 2022 PGA Championship away from his Bedminster, New Jersey golf course on Sunday night.

The PGA awarded Trump National the championship back in 2014, before he’d announced a presidential run but was still knee-deep in birther conspiracy theories. After last week’s insurrection prompted a flurry of resignations and distancing from Trump sycophants attempting to save face on the way out the door, the PGA has followed their lead, in looking to relocate for next year’s championship. Here’s how Seth Waugh, CEO of the PGA of America, characterized it to the AP:

“We find ourselves in a political situation not of our making... We’re fiduciaries for our members, for the game, for our mission and for our brand. And how do we best protect that? Our feeling was given the tragic events of Wednesday that we could no longer hold it at Bedminster. The damage could have been irreparable. The only real course of action was to leave.”

Waugh continues to characterize it as a business decision, focused on “protecting our brand and reputation.” The Trump Organization, as you might expect, didn’t have a charitable reading on the cancellation, issuing a statement that it’s “incredibly disappointed” with the decision and alleged breach of contract:

“This is a breach of a binding contract and they have no right to terminate the agreement... As an organization we have invested many, many millions of dollars in the 2022 PGA Championship at Trump National Golf Club, Bedminster. We will continue to promote the game of golf on every level and remain focused on operating the finest golf courses anywhere in the world.”

The termination isn't unprecedented. Although last Wednesday was a new escalation of nationalist violence, you could reasonably venture it was an outgrowth from the same “political situation” that led to the PGA of America canceling the PGA Grand Slam of Golf at Trump National Los Angeles Golf Club back in 2015. Just getting his first campaign off the ground, then-candidate Trump demonized Mexican immigrants, and the PGA canceled the event outright. As Insider points out, UK golfing authorities also barred his Scotland course, Trump Turnberry, from hosting the British Open. So some golf officials, including the PGA of America themselves, were already responsive to the inflamed rhetoric before Trump even took office.

Trump, a guy who spent nearly a quarter of his presidency (313 days) on the golf course, has long clamored to host one of the four majors. If losing the PGA Championship and indefinite British Open ban are any indication, he might have a hard time acclimating back to some of the politest parts of polite society.

More like this
Live from New York: Revisiting the totally bonkers era of post-9/11 'SNL'
By Rafi Schwartz
The U.K.'s biggest asshole is crossing the pond to join the goblin army at Fox News
By Rafi Schwartz
I never want Tucker Carlson to stop talking about Nicki Minaj's cousin's friend's enormous balls
By Rafi Schwartz
Stay up to date