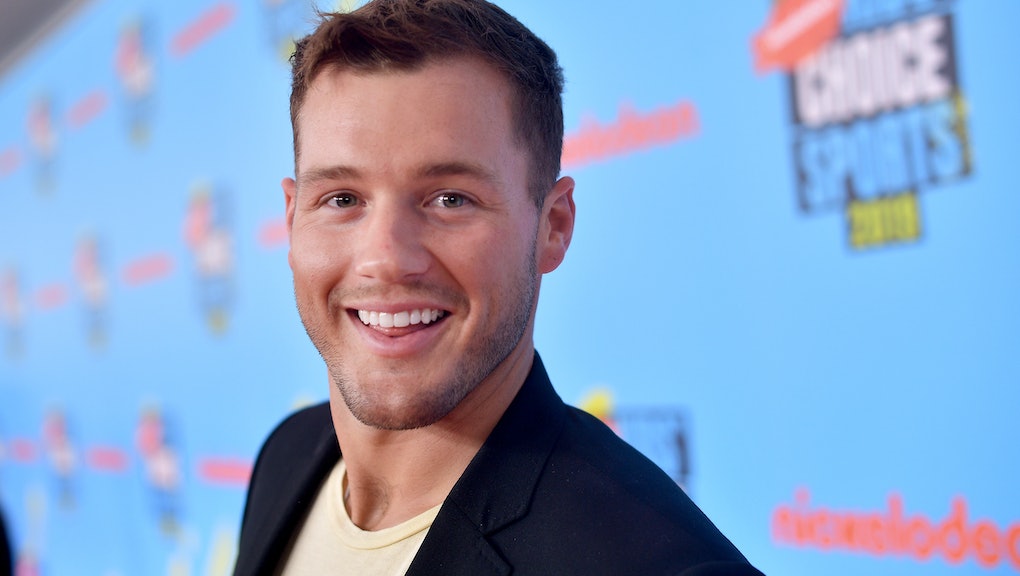 The case for queering 'The Bachelor'

It’s funny how vastly different romance can look, depending on what sort of television you watch. For example, Genera+ion, the HBO show about teens today in all their confident, queer glory, imparts the notion that love is more fluid and malleable than it’s ever been publicly allowed to be previously. On the opposite end of the spectrum, The Bachelor franchise promotes a gamified, exaggerated notion of heteronormativity, preaching to both contestants and viewers that marriage to a person of the opposite sex is the ultimate life-prize to be won.

Against this backdrop, we learned the news that former Bachelor star Colton Underwood is gay on Wednesday. He told Good Morning America’s Robin Roberts that he realized the truth of his sexuality when he was a freshman in high school. But he was raised Catholic in the Midwest, and years of parochial school taught him that being gay was a sin. So Underwood concealed that part of himself, all while becoming a star football player and doing a brief stint in the NFL, then entering reality television as a contestant on Becca Kufrin’s season of The Bachelorette.

After he was eliminated by Kufrin, Underwood did Bachelor in Paradise and was linked to fellow contestant Tia Booth. Then he landed his own season of The Bachelor, which was famously heavily marketed around his virginity. “I could never give anybody a good enough answer as to why I was a virgin,” the 29-year-old said on GMA. “The truth is, I was a ‘virgin Bachelor’ because I was gay, and I didn’t know how to handle it.” Underwood later wrote a book called The First Time about losing his virginity in The Bachelor’s “fantasy suite” to Cassie Randolph, who he coupled-up with at the end of the season. They split in May 2020.

It’s easy to downplay The Bachelor’s societal influence — who cares if a bunch of purportedly cis people pursue an ill-fated, whirlwhind engagement to a stranger? It’s vapid reality television, and most people who compete are really vying for their 15 minutes of fame, right? But check out what Underwood said being cast meant to him: “I literally remember praying to God the morning I found out that I was the Bachelor and thanking him for making me straight,” he told Roberts. “I remember that vividly, of saying like, ‘Finally, you’re letting me be straight. Finally, you’re giving me a wife, a fiancé, and then I’m gonna have the kids, and then I’m gonna have the house, and then I’m gonna have all this.’”

It’s wild to conflate The Bachelor with these things, not least because most couplings the show generates dissolve rather quickly. On that note, Underwood’s year long relationship with Randolph ended badly. She filed for a domestic violence restraining order against him in September 2020, accusing Underwood of stalking her and putting a tracking device on her car. Randolph dropped the restraining order in November.

Anyhow, the news of Colton’s sexuality highlights how toxic The Bachelor’s particular flavor of heteronormativity can be. When you think about it, it’s pretty surprising more contestants haven’t fallen in love with each other. They’re living (and partying) in a mansion with dozens of other beautiful people, and most don’t get that much facetime with the show-sanctioned object of their affections. Plus as Underwood just reminded us, they ain’t all straight. The franchise has sparked a few same-sex romances that we know of: in 2019, Demi Burnett and Kristian Haggerty got engaged on the sixth season finale of Bachelor in Paradise. On The Bachelor Vietnam in 2018, Minh Thu confessed her love for fellow contestant Truc Nhu during a rose ceremony, and the women became a couple after the show. A couple of years earlier, Megan Marx and Tiffany Scanlon got together after meeting on The Bachelor Australia.

There have been a handful of queer dating shows. Famously, MTV’s A Shot at Love with Tila Tequila became the first to focus on bisexuality in 2007, though it had its issues. The show framed Tila’s coming out as a “gotcha” moment, pitting the 16 straight men and 16 gay women against each other in a “battle of the sexes.” Lifetime's Gay, Straight or Taken?, Bravo's Boy Meets Boy and Fox's Playing It Straight dabbled in queerness but all featured twists where certain contestants were only pretending to be homosexual (or vice versa) in pursuit of winning cash or vacations. The closest we’ve gotten to equitable queer representation on a reality dating show is season eight of MTV’s Are You The One, which featured a sexually fluid cast.

Thus far, The Bachelor has stuffily refused to broaden its definition of love worth competing on television for. In 2014, former Bachelor Juan Pablo Galavis said there shouldn’t be a gay lead, because “they're more pervert in a sense,” adding he didn’t think that would be good for kids to watch on TV. (Right, because alcohol-fueled polygamist courtship is otherwise so appropriate for children.) Galavis was slammed for his comments and later apologized. But in an interview with the New York Times Magazine, longtime Bachelor host Chris Harrison said he didn’t see the franchise becoming LGBTQ+ inclusive either, albeit for a different reason. “Is it a good business decision?” he mused, adding: “Is our job to break barriers, or is it a business?”

But hey, a lot has changed in the seven years since Harrison said that. Gay people can get married now, for one. In another shift, Harrison was sidelined for defending a Bachelor contestant who once dressed up like Scarlett O’Hara for a plantation-themed fraternity party. There’s even been a lone Black Bachelor and two Black Bachelorettes (out of 25 and 16 seasons, respectively — which is a whole different can of worms).

As far as we know, The Bachelor will stick to its extremely myopic view of love, which is largely white and largely straight. Its viewership is correspondingly 80% white; we don’t know the percentage of fans who identify as queer. But the franchise is the most visible of all the reality TV dating shows, and increasingly, it doesn’t remotely portray the relationships real people engage in. Colton Underwood figured that out the hard way — also on Good Morning America, he apologized for misleading Bachelor contestants and Randolph, his ex. It's long past time to dispatch with the fake fairytales. Reality TV should at least try to represent reality.