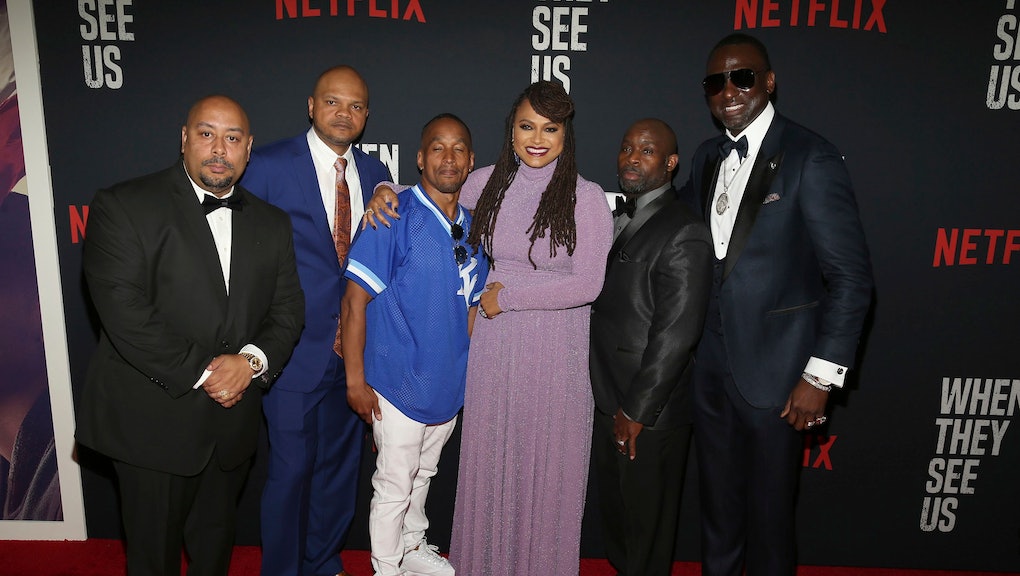 Ava DuVernay's Netflix miniseries When They See Us follows the Black and Latino men now known as the Central Park Five, who, as teenagers in 1989, were wrongfully convicted for raping a woman. The boys — Korey Wise, Kevin Richardson, Raymond Santana, Antron McCray, and Yusef Salaam — spent years in prison before their convictions were eventually overturned once someone else confessed to the crime. Yet while the five men were exonerated, the prosecutors of their case who helped send them to prison, Elizabeth Lederer and Linda Fairstein, never faced any consequences. Until now.

On Wednesday, June 11, Lederer resigned from her teaching position at Columbia Law School, where she taught trial practice, according to the New York Times. Prior to her resignation, over 10,000 people had signed a petition calling for her to be fired. Fairstein, meanwhile, who works as a crime novel author, has lost a book deal with her publisher and has resigned from several boards since the miniseries' debut, per the Times.

In the Netflix show, which premiered on May 31, both women come off badly, to say the least. Lederer (played by Vera Farmiga) is shown as having had doubts about the boys' guilt but prosecuting them regardless, while Fairstein (played by Felicity Huffman) is portrayed as an aggressive lawyer who purposely ignored evidence that suggested the Five were innocent. After the series' release, many viewers demanded that the two women be held accountable for their actions, and it seems that time has come.

The day before Lederer's resignation from Columbia was announced, the college's Black Law Students Association called for her firing. The group sent a letter to the dean that requested not only that Lederer be removed from her position, but that Columbia Law add anti-racism teachings into its curriculum.

In an email to students, Columbia's dean, Gillian Lester, said that When They See Us “reignited a painful — and vital — national conversation about race, identity, and criminal justice.” Per the Times, the email also included a statement from Lederer, who wrote that she appreciated her time teaching at Columbia but that “given the nature of the recent publicity generated by the Netflix portrayal of the Central Park case, it is best for me not to renew my teaching application.”

While Lederer seems to understand the severity of the backlash caused by the series, Fairstein is a different story. The author, who spent 25 years as a sex crimes prosecutor and was the inspiration for Law and Order: Special Victims Unit, has fought back against her portrayal in the show. On June 10, she published an op-ed in the Wall Street Journal that called DuVernay's work a "fabrication", and implied that despite the evidence that exonerated the five men she helped send to prison, she believes they are still guilty of something.

“Ms. DuVernay’s film attempts to portray me as an overzealous prosecutor and a bigot, the police as incompetent or worse, and the five suspects as innocent of all charges against them," Fairstein wrote in her op-ed. "None of this is true."

Despite Fairstein's insistence that she was unfairly portrayed in the series, countless people feel otherwise — including the Central Park Five, who unanimously said during a recent panel that they blame Fairstein, among others, for what happened to them. Per Variety, Santana explained that when the prosecutor learned that the DNA evidence found at the crime didn't match that of any of the boys, that "was her chance for her to take step a back and say, ‘Let me reevaluate, something’s wrong here." But instead, she "fumbled" her chance to "really do the right thing," he continued. "And she kept pushing forward.”

DuVernay has also claimed that Fairstein refused to meet the director unless she got approval of When They See Us' scripts, which Fairstein's lawyer has denied, according to NPR.

As the miniseries continues to gain attention and praise for its depiction of the Central Park jogger case, more and more people are calling for Fairstein and Lederer to face justice. Although Fairstein is no longer working in law, Lederer is still a prosecutor at the District Attorney's office, working on unsolved rape and murder cases.

Hopefully, the loss of book deals, teaching jobs, and board positions is the beginning of a reckoning for two women who were complicit in the incarceration of five innocent children. Considering the pain that Wise, Richardson, Santana, McCray, and Salaam experienced, the consequences that Fairstein and Lederer are now facing are clearly way overdue.

More like this
In an emotional statement, BTS opened up about the racism they’ve faced
By Kara Weisenstein
The police killing of Daunte Wright inflames existing anger in Minneapolis
By Rafi Schwartz
Matt Gaetz, who is definitely not a sex criminal, Venmo'd an accused sex trafficker $900
By Rafi Schwartz
Stay up to date