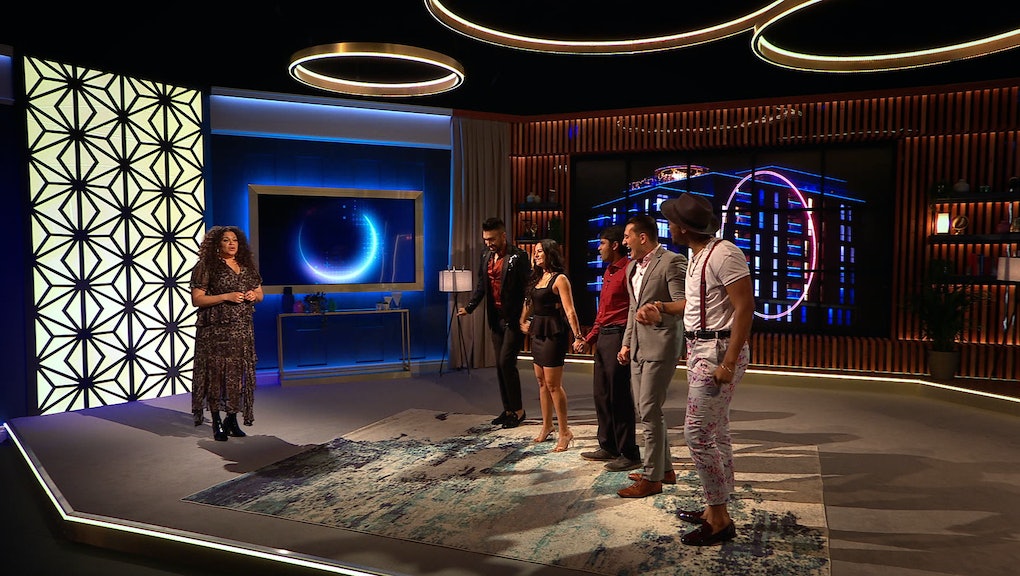 In Toronto, Minnesota, and Massachusetts, three friends logged onto Discord to watch the Season 2 finale of Netflix’s The Circle together. Over Discord’s voice chat, they counted down to make sure they all clicked play at the same time, eager to watch how the reality show and social media experiment would conclude.

“I just love that it's this fake social media show and we're these real social media friends watching it together,” Zeke BR, 27, tells Mic.

The three friends initially met in a Facebook meme group, but they quickly began talking in a group chat on a daily basis. Two of the new friends, BR and Owen Höglund, 24, found such great chemistry that BR crossed the U.S.-Canada border to meet him. They’ve now been dating long-distance for about two years.

It’s not abnormal to meet close friends or romantic partners on the internet — especially when digital communication has become our primary way to stay in touch in the pandemic. According to the Pew Research Center, 48% of 18-to-29-year-olds have used an online dating app and 57% of American teens have made a friend online. But even as online friendships became more commonplace, TV shows like To Catch a Predator and Catfish drilled into our minds the potential dangers of meeting these people in real life. Now, The Circle encompasses both sides of the coin, by emphasizing the normalcy of socializing online. It reflects the strange, cyber minutiae of our daily lives, in which we figure out how many emojis and exclamation points are necessary to convey our emotions over text. And it resonates with people like BR and Höglund, who have found genuine connections in unlikely digital spaces. At the same time, the nature of the competition incentivizes deception, encouraging the viewers and players alike to keep on their toes when making new friends on the internet.

The Circle is essentially a social media popularity contest: Players travel to an apartment building in England, where they are sequestered in chic flats with no in-person contact. They can only interact with fellow players, and that communication can only occur via text. So, since in-person contact is out of bounds, players can choose to represent themselves however they wish. Sometimes, this means pretending to be single, or using someone else’s photos. Other times, contestants will enter the Circle as a catfish, adopting another person’s identity and pictures. Every few episodes, the contestants rank each other. Typically, the two most highly-rated players become “influencers,” and together, they decide who gets eliminated and loses the chance to win $100,000. As a reality competition, The Circle amplifies the best and worst aspects of online friendships. Sometimes, these relationships seem stale — players will have a short, surface-level conversation, then declare themselves perpetual allies in the game. But often, their friendships last off-screen.

Take Season 1 fan favorite, the dorky yet lovable virtual reality designer, Shubham Goel. He approached the game with a heart-warming earnestness, despite being skeptical of the show’s premise. He even once ran a small, independent campaign for Governor of California, voicing his belief that social media should be banned for minors in K-12 schools. But by the end of the season, Goel — who placed second overall — formed an unlikely yet genuine bromance with winner Joey Sasso, a gym rat who would fit in perfectly on Jersey Shore.

For many millennials and Gen-Zers who grew up on social media, online relationships can feel just as real as in-person ones do. “The idea that online relationships or online dating is a less organic way of getting to know somebody... It's like, yeah, you're crafting a persona or whatever, but it's not that different from what you do if you meet someone at a bar,” Höglund tells Mic.

That was certainly the case for now 31-year-old Ellen Zemlin. In 2003, Zemlin — who lived in Indiana — met a London-based friend named Alan in an AIM chatroom for people participating in National Novel Writing Month (NaNoWriMo). Five years later, they met in person while Zemlin was studying abroad in Northern Ireland and visited Alan in London.

“We had been friends for years before we saw pictures, knew what each other looked like, or even voice chatted,” Zemlin tells Mic. “So I like the way that The Circle operates from the base assumption that you can build meaningful relationships solely through text-based communication.”

Eighteen years after meeting online, Zemlin and Alan’s friendship is still going strong. They’ve met each other’s families, traveled to visit each other multiple times, and text most days.

Of course, while The Circle may accurately represent the possibility of forming strong bonds via text, the show doesn’t exactly replicate the conditions of real online friendships. Even though the players’ communication is entirely text-based, save for a few profile photos that they share, the elephant in the Circle is that they’re all playing a game and being filmed for a TV show. Contestants are motivated to play as catfishes or emotionally manipulate others in a way they might not if there wasn’t a $100,000 prize at the end of the game.

Depending on how you look at it, one of the most hilarious and/or anxiety-inducing plotlines on season 2 was the relationship between Chloe Veitch, who previously appeared on Netflix’s dating game show Too Hot To Handle, and DeLeesa St. Agathe, who was catfishing as her husband, Trevor. St. Agathe strategically pretended that Trevor was a single father, beckoning women like Chloe to flirt with him — in reality, Chloe was flirting with Trevor’s wife all along. Toward the end of the show, Veitch told Trevor that she was developing strong feelings for him. Behind the persona, St. Agathe felt guilty –– but she was playing to win, even if she had to break hearts along the way.

“I got really stressed out about DeLeesa-slash-Trevor and Chloe’s relationship,” BR says. “But also, it was a choice that DeLeesa made to do that.”

Veitch quickly forgave St. Agathe when they met in person during the season finale. St. Agathe went on to win The Circle, and she and Veitch have become close friends in the time since. Everyone on The Circle is vying to win a prize, so it’s easier for contestants to forgive each other for playing the game that they signed up for. But the rules of real-life internet relationships aren’t the same as the rules of The Circle. “Anyone you’re building a relationship on The Circle with might not be who they say they are,” Zemlin says. “That's definitely different than meeting someone even on Tinder, where you can see a bunch of photos immediately, and their Instagram is often connected.” Tinder even has a verification feature that helps users prove to potential dates that they are who they say they are.

Perhaps the bonds formed between cast members on The Circle isn’t built off of what happens during the game, but rather their shared experience of participating in the show’s social media experiment. And that is reflective of actual internet relationships. Online communities built on shared passions or ideals frequently help virtual friendships flourish.

Sereen Haddadin, 24, has been making internet friends since 2009, when she was 12 and posting on Tumblr. But two years ago, she found close friends on Twitter in the One Direction fan community. These diehard “stans” all followed each other, and when one fan was turning 18, around 20 of her mutual followers formed a group chat so that they could surprise the birthday girl with a VIP ticket to a Harry Styles show. After, the group chat remained active. "Now, our friendship has evolved into a very real thing," Haddadin tells Mic. "Like, I'm about to sign a lease with girls from that group chat that I hadn't known previously."

Like BR and Höglund, Haddadin also follows the antics of The Circle with her internet friends. "It's definitely interesting to think like, you watch the show from a different point of view from the rest of the world who are like... ‘Making friends just through tech? That's crazy!’" she says.

While social media can help people like Haddadin and her friends connect over things like shared fandom, it can also offer solace for people who don’t feel comfortable being themselves IRL. On The Circle Season 2, a 58-year-old writer Lee Swift chose to “play” as River, a 24-year-old heartbroken student. Swift, who is gay, grew up in a different era than his fellow contestants, who were mostly in their 20s and early 30s.. “Social media, I was very terrified of it,” Swift said in an episode of The Circle - The Afterparty, a one-off special that airs on Netflix after the finale. But during the game, his feelings changed. “I wish when I was a teenage gay boy in small-town West Texas that I had social media. I wouldn’t have felt so alone and afraid.”

At its worst, The Circle might seem like another mindless reality TV show that helps keep us entertained during a pandemic. But at its best, The Circle is a love letter to social media, sliding into our DMs to remind us that these connections are why the stress of social media can be worth it.

More like this
'Starstruck' will melt your icy heart and make you believe in love again
By Kara Weisenstein
This new national game show museum is a shrine to TV nostalgia
By Keith Nelson Jr.
The end of 'Keeping Up with the Kardashians' hardly means the end of the Kardashians
By Carrie Wittmer
Stay up to date