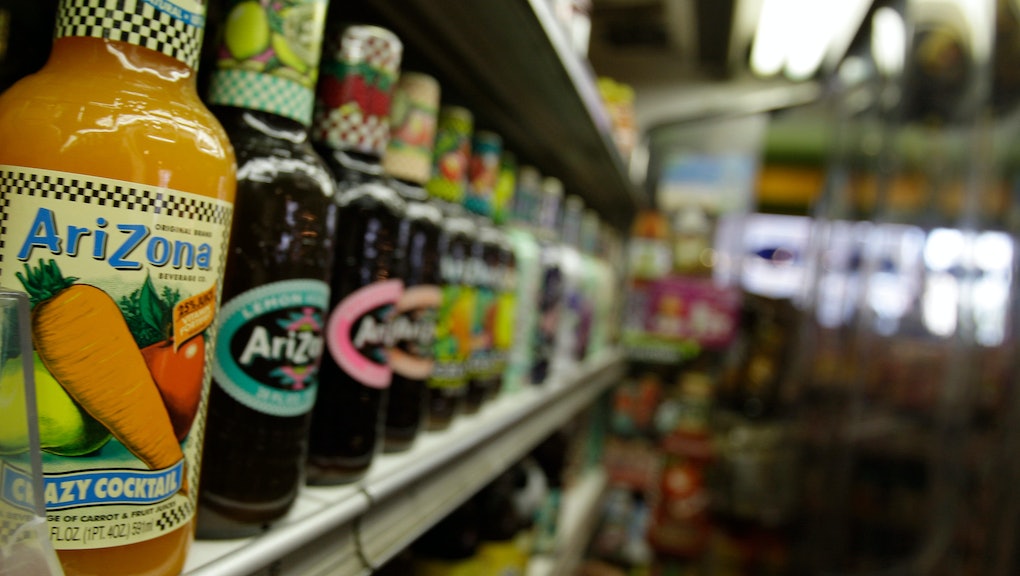 The company that makes the iced tea you might have bought on the way home from school, or the Arnold Palmer you’ve probably sipped at casual dining chains with the fam, is now expanding into the weed industry. Arizona Beverage Company has announced a deal with Denver-based cannabis company Dixie Brands Inc., the Wall Street Journal reports. Still awaiting the green light from Dixie’s board, the deal stipulates that Dixie will manufacture the products and sell them in licensed dispensaries, and that Arizona can buy an up to $10 million stake in the weed company.

Dixie’s offerings, currently sold in five states, include vapes, tinctures, topical creams, drinks, and a bevy of edibles. The final details of the plan are still being smoothed out, but Dixie’s Arizona line could begin with gummies and vape pens, followed by lemonade, teas, seltzer, and other beverages, per the Wall Street Journal. Arizona would play no part in their production. Although the cannabis company would begin selling the line in the US, it's planned to eventually foray to Latin America and Canada. If it goes through, the deal would make Arizona one of the first major American brands to enter the cannabis business.

Weed-infused drinks are certainly not new. But the deal with Arizona—whose products are wholesome, timeless mainstays of school vending machines, gas stations, and corner stores across the country — marks a departure from the cannabis and Big Alcohol companies that have already jumped on the weed-infused drink market.

Molson Coors Brewing Co., which owns Coors and Blue Moon; Constellation Brands Inc., which owns Modelo and SVEDKA; and Labatt, a subsidiary of AB InBev, which owns Budweiser, have all teamed up with Canadian cannabis companies to concoct weed-infused drinks. (Edibles are poised to appear on store shelves in Canada—which recently legalized recreational marijuana use—this December.) Diageo, owner of Tanqueray and Johnnie Walker, has its finger on the pulse of weed market. And last year, Heineken NV-owned Lagunitas brewery teamed up with cannabis company AbsoluteXtracts to make Hi-Fops, a hoppy, effervescent cannabis drink, available in California dispensaries. Several smaller cannabis companies also make and sell their own weed-infused drinks.

It's important to note that some weed-infused drinks contain alcohol, while others don't. Combining weed and alcohol can yield a stronger, faster buzz than consuming either alone, but it can also cause dizziness and nausea.

Coca-Cola has discussed making weed-infused drinks with a Canadian cannabis company, while Pepsi is also eyeing the cannabis market. But both have yet to announce formal deals with cannabis companies, Business Insider reports.

“You’ve got to be willing to try things,” Arizona chairman and CEO Don Vultaggio told the Wall Street Journal. “The upside is we’re one of the first ones in an emerging space.”

Indeed, the global weed-infused beverage market does look rather promising, predicted to grow from $1.57 billion in 2018 to $5.04 billion in 2026, according to a report by market and research consulting firm Reports and Data. But some remain skeptical. Amanda Chicago Lewis of The Verge questions whether people even want to drink their weed. As it stands, weed-infused drinks account for only 2 to 3% of cannabis product sales, she reports. She sees Big Beer's expansion into weed largely as a way to salvage its own declining industry. (Likewise, Arizona's market share was 16.2% in 2018 — down from 23.4% in 2013, per the Wall Street Journal.)

What's more, striking the delicate balance of flavor, dosage, and timing of the onset of inebriating effects in a weed-infused beverage is tricky, she adds. Drinks that contain only CBD, the non-inebriating compound in weed, have also cropped up, but CBD’s effectiveness in food and beverage products remains up for debate.

Regardless of what the future holds, that the company behind nostalgic favorites like Arnold Palmer and Southern Style Sweet Tea also plans to enter the weed industry is yet another, telltale sign of the dwindling stigma against cannabis.

More like this
How long a weed high lasts, according to science
By Melissa Pandika
Want to study cannabis chemistry? This Michigan university is now offering a scholarship
By Melissa Pandika
The benefits of rose tea, explained
By Tracey Anne Duncan
Stay up to date