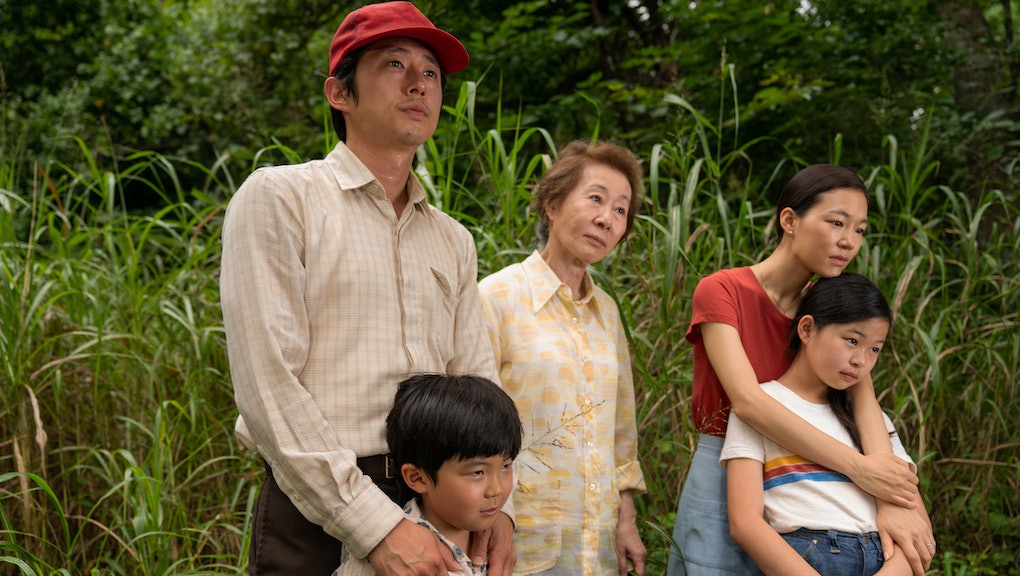 The cast of 'Minari.' Courtesy of A24

The debate over "bamboo ceilings" misses the point

On Monday, The Hollywood Reporter tweeted an article with the headline, “Oscars: Diverse Field Sees Asian Actors Shatter a Bamboo Ceiling.” The piece celebrated the unprecedented recognition of Asian performances in this year’s Oscars nominations, including Riz Ahmed (Sound of Metal), Steven Yeun (Minari), and Youn Yuh-jung (Minari), but the term “bamboo ceiling” immediately sparked outrage on Twitter. Some described its use as “problematic”; another user called on the publication to “delete this immediately.”

An hour later, the piece’s author, Rebecca Sun, senior editor of diversity and inclusion at the magazine, tweeted a defense. In her thread, she took full responsibility for producing the headline. While she said she understood why people were offended, she noted the legitimacy of the term, which is used to describe the "difficulty Asian Americans in the corporate world face in breaking through to upper management.” The phrase is most commonly attributed to leadership strategist Jane Hyun, author of 2005's Breaking the Bamboo Ceiling: Career Strategies for Asians. In her book, Hyun not only describes common assumptions about Asians in the workplace, such as lack of communication skills and leadership potential, but she also offers advice for Asians on how to overcome them.

Since Hyun’s popularization of the term, it’s frequently appeared in headlines across major publications. In 2014, The Atlantic published an article titled “Cracking the Bamboo Ceiling” and NPR News produced a segment on “Tell Me More” called “Does the ‘Bamboo Ceiling’ Shut Asian Americans Out of Top Jobs?” Forbes published an article as recent as 2020 with the headline “Breaking the Bamboo Ceiling: How Asian Managers Can Lead for Success.” While Sun’s article received backlash, other readers sought to illuminate the term’s origins. The Asian American Journalists Association pointed to readers’ unfamiliarity with the term as a sign of AAPI’s lack of visibility and representation in media coverage. Asian American race and feminist blogger Jenn Fang admitted that she has never loved the “trope-y” term but placed emphasis on its validity and the ongoing discrimination problem the phrase refers to.

However, one curiosity about the controversy is that many of the most outraged are, in fact, not part of the AAPI community. During a time when anti-Asian violence continues to surge, it feels as if some are more concerned about an Asian American writer’s educative use of a term with real origins than the rise of discriminatory attacks on Asians in the U.S., of which there have been over 2,800 since the start of the pandemic. Writers like Esther Tseng and Vulture's Alex E. Jung weighed in with comments mocking people’s quickness to attack Sun’s use of the term “bamboo ceiling,” while others in the community questioned its exhausting discourse. Still, presumably due to the backlash, The Hollywood Reporter changed the headline to “Oscars: Diverse Field Sees Asian Actors Finally Break Through.”

While it is completely fair, and in fact, encouraged, to engage in conversation regarding the term’s East Asian specificity, as well as its possible out-datedness, Monday’s controversy did neither — it simply highlighted the performative nature of those who are willing to defend Asian Americans reactively, as opposed to through actual educative measures. Something as simple as clicking on the article would reveal the writer’s Asian American identity and a quick Google search, the term’s origins. Hopefully next time an Asian American issue trends on Twitter, it’ll be one drawing attention to anti-Asian violence in local communities or the actual workplace discrimination that the term “bamboo ceiling” seeks to describe — rather than stir up controversy for controversy’s sake.

More like this
'Exterminate All the Brutes' is a messy, ambitious documentary that ties together genocide, white supremacy, colonialism ... and Josh Hartnett?
By Nicholas Russell
'The Nevers' will be so much better when Joss Whedon has nothing to do with it
By Kara Weisenstein
How late night TV marked the Derek Chauvin verdict
By Kara Weisenstein
Stay up to date