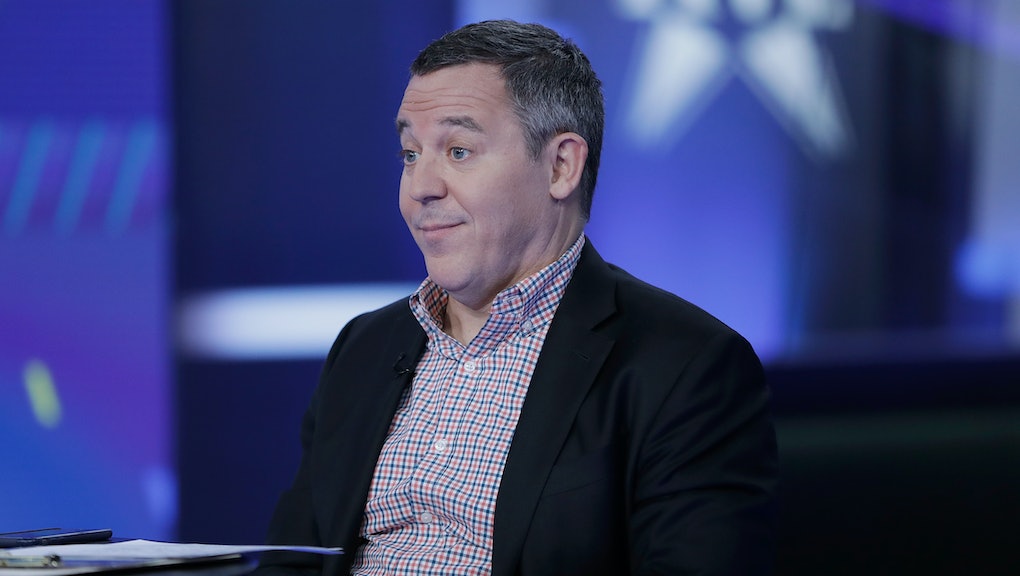 The debut of 'Gutfeld!', Fox News's new comedy show, went about as well as you'd expect

For years, people have complained about the lack of diversity in late night. The comedy shows that have been the bedrock of the evening lineups across the major networks have been plagued by hegemony, but thank god Fox News is here to break up the old way of doing things. That's right, after all too long, there is finally a late-night show hosted by a conservative. On Monday night, Fox News aired the debut episode of Gutfeld!, an hour-long program that has been billed as the right-wing alternative to Stephen Colbert's The Late Show and Jimmy Fallon's The Tonight Show.

The lead up to the show's launch got the full-on blowout treatment — a billboard on Hollywood Boulevard, promotion across just about every other show on the platform, and a brand new logo that looks like it was designed in WordArt. Much ado was made about how host Greg Gutfeld would touch on topics that no other late-night host would dare cover and bring a conservative voice to a comedy world that the right believes is now dominated by "woke scolds."

Yeah, that seems about right. There were so many warning signs that this schtick wasn't going to work, because this schtick never works.

It didn't work in 2007 when Fox News tried to take on Jon Stewart's The Daily Show and Colbert's The Colbert Report with its 1/2 Hour News Hour, a "satirical" news program that tried to do send-ups of headlines from the conservative point of view. That show didn't even last a year, panned by viewers as "so predictable and so stale that it fails to produce any laughs." It barely worked with Red Eye, another show hosted by Gutfeld that aired at 3 a.m. on Fox News even though it taped at 8 p.m. — because the appearance of being freewheeling and uncensored was more important than actually being those things. That show survived almost solely on the fact that it attracted real guests like Amy Schumer and Jim Norton, who would joyously swat down the "comedy" stylings of conservative shills like Steven Crowder — people who can get laughs from a friendly audience but who bomb in front of anyone outside their bubble.

Gutfeld! is Fox News going back to the well in the most soulless way possible. And it's clear from the jump that the company positioning this show as some sort of competitor to the pillar late-night programs is nothing more than marketing. Much is made of the studios where The Late Show and The Tonight Show are hosted, which have storied histories and are institutions in their own right. Gutfeld! is indistinguishable from any other Fox News program, save for that it appears that Gutfeld maybe got to pick out a comfier chair before plopping it down in an abandoned airport terminal.

None of that is present in Gutfeld's six-minute monologue, which contains more screed than punchlines, more conservative grievances than subversive takes on a culture that has left them behind. I tried to count what could reasonably be considered a punchline in the whole soliloquy, and I found maybe a dozen. In six whole minutes. Of a comedy show.

Gutfeld fancies himself a David Letterman-like figure. But for all of Letterman's flaws, he was actually subversive. Letterman used his platform — one of the most-watched programs on television — to punch up at the parts of culture that he viewed as undeserving of respect or reverence by engaging with it directly. He attracted guests who were rich and powerful and famous and made them feel small — whether they deserved it or not.

Gutfeld isn't engaging with anyone. He isn't holding truth to power. He's barely making jokes. His first guest was David Rubin, for Christ's sake. The monologue includes an extended riff on a Brian Williams scandal from six years ago! This is a show by an aggrieved conservative for aggrieved conservatives, with a script produced by an AI algorithm fed thousands of headlines from The Babylon Bee.

Toward the end of his run on The Late Show, Letterman was consumed by his cynicism. It made him jaded, combative, and often difficult to watch. But at least he was still funny. Gutfeld started with that same level of bitterness, but uses it to punch down while maintaining a smarmy smile. This is why conservative humor always fails: It is privileged and powerful people complaining about how that power and privilege is challenged sometimes and they find that just so annoying. Hilarious.

More like this
Live from New York: Revisiting the totally bonkers era of post-9/11 'SNL'
By Rafi Schwartz
The U.K.'s biggest asshole is crossing the pond to join the goblin army at Fox News
By Rafi Schwartz
Trump's brilliant 2022 strategy is for Republicans to get into a messy intra-party fight
By Rafi Schwartz
Stay up to date