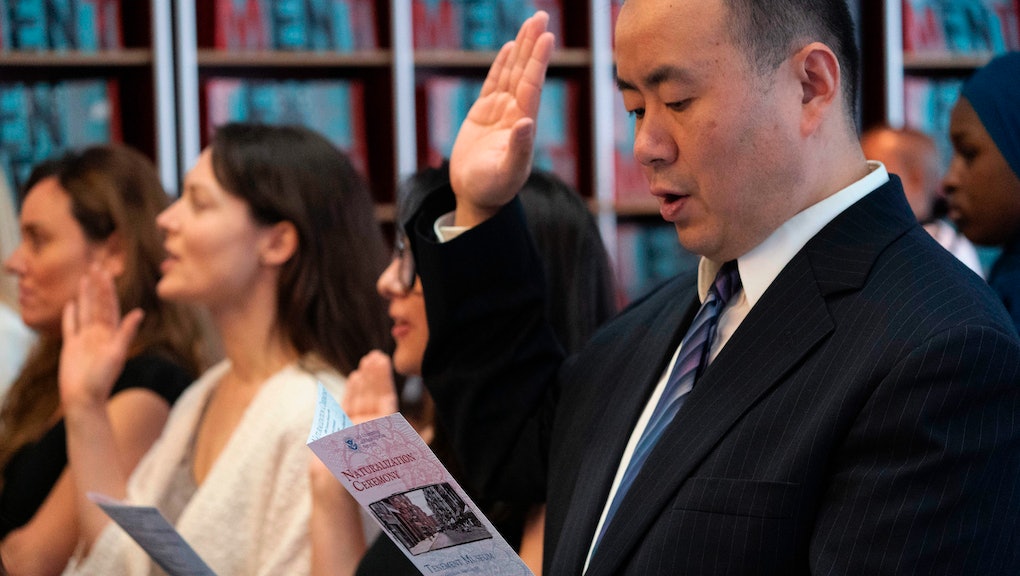 The "Denaturalization Section" is the Trump administration's latest anti-immigrant endeavor

In a press release issued Wednesday, the Department of Justice (DOJ) announced the creation of the "Denaturalization Section," which will allocate federal investigators increased resources so that they can strip certain immigrants of their citizenship privileges. The Denaturalization Section is dedicated to "investigating and litigating revocation of naturalization" for immigrants who have completed the series of steps required to become a U.S. citizen, such as getting fingerprinted, listing other names or identities, and disclosing if they have been involved in deportation proceedings.

"When a terrorist or sex offender becomes a U.S. citizen under false pretenses, it is an affront to our system — and it is especially offensive to those who fall victim to these criminals," said Assistant Attorney General Jody Hunt in the DOJ press release announcing the new section.

Previously, denaturalization was primarily used by the DOJ to prosecute those who jeopardized national security, but the new Denaturalization Section will allow the federal officials to look into cases of fraud. According to The New York Times, the move has "raised alarms among some department lawyers who fear denaturalization lawsuits could be used against immigrants who have not committed serious crimes."

Most often, a denaturalized citizen is deported. But sometimes an individual's status is reverted instead to that of a lawful permanent resident, as in the first case the DOJ successfully prosecuted in 2018. Denaturalization can have a chain reaction effect, too, as the denaturalization of a parent or spouse can result in the revoked citizenship of a child, partner, or other dependents.

The revocation of citizenship can only be pursued by federal prosecutors, through either civil proceedings or a criminal conviction. Proponents of denaturalization note that there is a high burden of proof on federal prosecutors for this kind of action, meaning that the danger of the process being misused is low. There is no statute of limitation on denaturalization, and cases are sometimes investigated decades after someone has been naturalized and made the U.S. their home.

There are about 20 million naturalized citizens living in the U.S. The DOJ initiative is the latest move in President Trump's staunchly anti-immigrant agenda; in addition to the high-profile family separation policy at the U.S. border in 2018, Trump has cracked down on refugee acceptance and enacted various travel bans targeting Muslim-majority countries.

While the Obama administration also made use of denaturalization as a way to convict and deport individuals, the scale of the Trump administration's efforts announced Wednesday is new. Between 1990 and 2017, the DOJ applied denaturalization proceedings judiciously, filing 305 cases, or about 11 per year. Under the Trump administration, the DOJ has increased both the number of reports filed and the number of cases pursued, due in part to the new collaborations with Immigrations and Customs Enforcement and the Department of Homeland Security.

There is no evidence to support Trump's oft-repeated claim that individuals immigrate to the U.S. to commit crime, that sanctuary cities lead to increased crime, or that immigrants are somehow predisposed to committing crime in the U.S. In fact, research shows that natural-born citizens are actually more likely to commit crime than immigrants are.

Nonetheless, Trump has determinedly pursued an anti-immigration agenda — and this is one more way he's throwing the government's might behind deterring new people from entering the country.

More like this
Biden has hit his 100th day in office. So what's next?
By Rafi Schwartz
FEMA said it would reimburse cities for housing homeless people. Most cities ignored the offer
By AJ Dellinger
The CDC's eviction freeze has been unfrozen by a federal judge
By Rafi Schwartz
Stay up to date