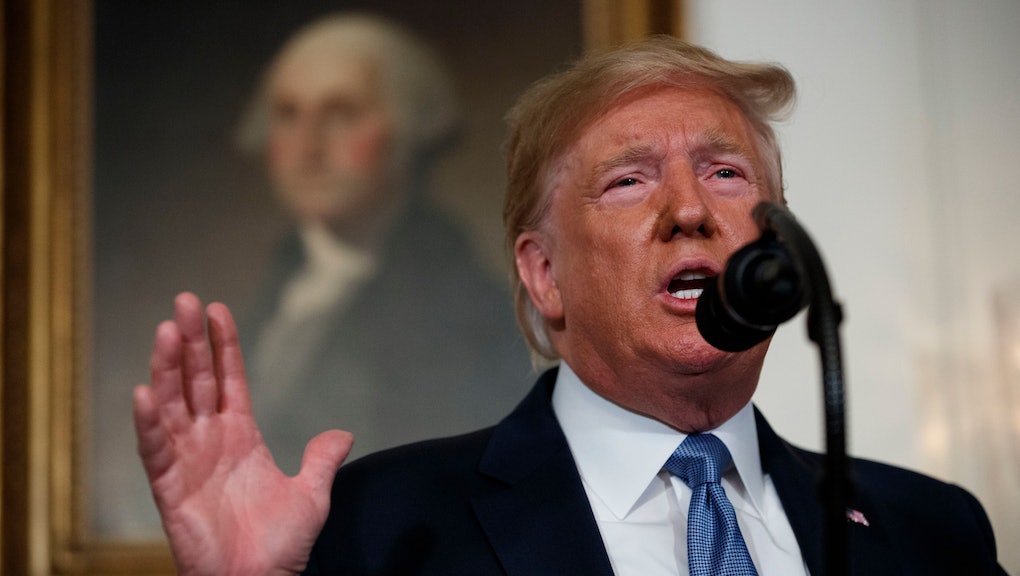 On Monday morning, President Donald Trump, stood a few feet in front of a portrait of George Washington, where he announced that the United States must condemn "racism, bigotry, and white supremacy." He made the announcement just a day after two white men committed separate mass shootings — one in El Paso, Texas, on August 4 and another in Dayton, Ohio on August 5. The El Paso shooter's manifesto, posted onto 8chan just 20 minutes before he walked into a Walmart shopping center and opened fire, contained white supremacist language aimed at the Latinx community.

After a busy summer of verbally accosting black and brown politicians on the internet, calling Latino immigrants "invaders," and hosting rallies where racist chants were the apparent theme, the internet has been fairly skeptical of Trump's most recently call-to-action, maybe because his "invader" rhetoric has seemed to directly fuel racial violence.

Trump has stoked panic about migrant caravans from Central America carrying members of ISIS, disease, and violent gang members, in hopes of cementing support for Republican candidates ahead of the 2018 midterm elections. These theories were all debunked nearly as soon as Trump said the words, but he and his administration kept repeating the claims. He used the death of Mollie Tibbets to call immigrants "murderers" — despite her family's wishes for him not to.

He's smiled when a crowd chanted "send her back" about Rep. Ilhan Omar, and he's laughed when someone from another rally suggested to "shoot" immigrants crossing into the United States.

On Saturday, the conviction he's ignited in some Americans, born from terror, became an undeniable reality. The El Paso shooter's manifesto contained much of the same hateful language that Trump has used publicly during the past few years. The shooter had driven nine hours to the border town — his intention was to kill "hispanics," and on his Instagram, a macabre tribute to Trump was posted: The president's name spelled out in guns.

Trump's connection to these deaths was undeniable to Beto O'Rourke. On Sunday, the Democratic presidential candidate and former Texas state representative was visibly angry when asked by members of the media if there's anything in his mind "that the President can do now to make this any better?"

Later on Sunday night, O'Rourke stated on Twitter that he stood by what he said earlier in the day. "We shouldn’t be asking if there’s anything he can do or if he’s responsible for this when we know the answer. I stand by what I said," O'Rourke wrote.

Former San Antonio Mayor and presidential candidate Julián Castro shared similar thoughts, writing on Twitter that Trump is unfit to lead the nation, and that he is morally bankrupt.

While Trump has tweeted his remorse for the events, it seems unlikely that his words now will suddenly shift what he's verbally encouraged all along.

More like this
Kamala Harris's trip to Guatemala highlights Biden's impossible task on immigration
By Vanessa Taylor
Why are there protests in Colombia? How a tax proposal ignited decades of unrest
By Ray Levy Uyeda
Supreme Court justices' political leanings: A guide to the 2021 court
By Vanessa Taylor
Stay up to date