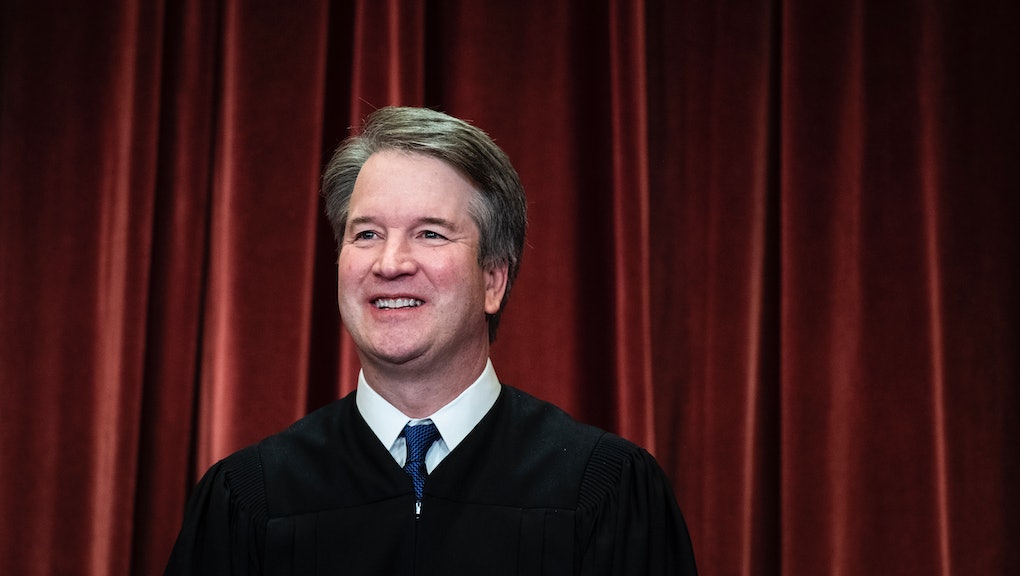 When he was nominated by then-President Donald Trump to fill a seat on the Supreme Court, Brett Kavanaugh faced a series of credible sexual assault and harassment allegations from former classmates. The first allegation, by Dr. Christine Blasey Ford, kicked off a fiery few weeks of public scrutiny on Kavanaugh and factored heavily into his Senate confirmation hearings. While his testimony before the Senate did include a very public grilling over the accusations, the investigation conducted behind the scenes was apparently much more lax. In a letter sent to newly sworn-in Attorney General Merrick Garland, Democratic Sen. Sheldon Whitehouse (R.I.) requested a renewed investigation into the FBI's background check of Kavanaugh, alleging that the one conducted in 2018 amid the confirmation process might have been "fake."

Whitehouse claims that instead of performing the standard, thorough review of a Supreme Court justice nominee's background on Kavanaugh, the FBI may have cut corners and helped push through the nomination for political reasons. Whitehouse described the FBI's investigation into Kavanaugh's past as "politically-constrained and perhaps fake," noting the agency's apparent failure to meaningfully look into accusations made against Kavanaugh by Ford.

Ford, now a professor at Palo Alto University, accused Kavanaugh of forcing himself on her during a party when the two were in high school. According to Ford, Kavanaugh and another man shoved her into a room, locked the door, and attempted to disrobe her. The two men were allegedly drunk at the time, and Ford accused Kavanaugh of covering her mouth in order to restrict her ability to breathe or call for help. Ford managed to make her way out of the room and the party before things went any further, she said. She testified before Congress about the alleged attack, offering up years-old notes from her therapist as evidence of the assault.

Kavanaugh denied the allegations made by Ford (as well as those made by other women), which Whitehouse argues meant there were "questions of fact to resolve." Despite other accusers coming forward to share their stories about Kavanaugh, and multiple law firms contacting the FBI with the names of credible witnesses who could have been interviewed during an investigation, Whitehouse claims that the FBI refused to look at the evidence or perform interviews with relevant parties.

Additionally, Whitehouse claims that while the FBI set up a tip line that was meant to collect evidence and leads for an investigation into Kavanaugh's background, the agency operated it "more like a garbage chute, with everything that came down the chute consigned without review to the figurative dumpster."

Whitehouse claims that all of this suggests the FBI may have violated its standard procedures, failing to conduct the type of thorough investigation into Kavanaugh's background that would usually be required for a potential Supreme Court justice. “If standard procedures were violated, and the Bureau conducted a fake investigation rather than a sincere, thorough, and professional one, that in my view merits congressional oversight to understand how, why, and at whose behest and with whose knowledge or connivance, this was done,” Whitehouse wrote. He noted that it "cannot and should not be the policy of the FBI to not follow up on serious allegations of misconduct" during background checks.

Whitehouse has been grilling the FBI for its lack of transparency on a number of topics of public interest, including the assault on the Capitol that occurred on Jan. 6, in recent weeks. While he pressed FBI Director Christopher Wray on some of these matters during recent Senate hearings, the FBI has yet to comment on the senator's letter and accusation of a "fake" Kavanaugh investigation.

What Whitehouse appears to want is to reopen the investigation into Kavanaugh, now that Garland is the head of the Justice Department. At the very least, the senator would like answers into why the FBI may have failed to do this in 2018, and if it was the result of a direct order from anyone. After all, then-President Trump did have a history of leaning on FBI leadership, from supposedly asking former FBI director James Comey to pledge his loyalty to reportedly considering firing Wray for refusing to publicly announce an investigation into Joe Biden, then-Trump's political rival.