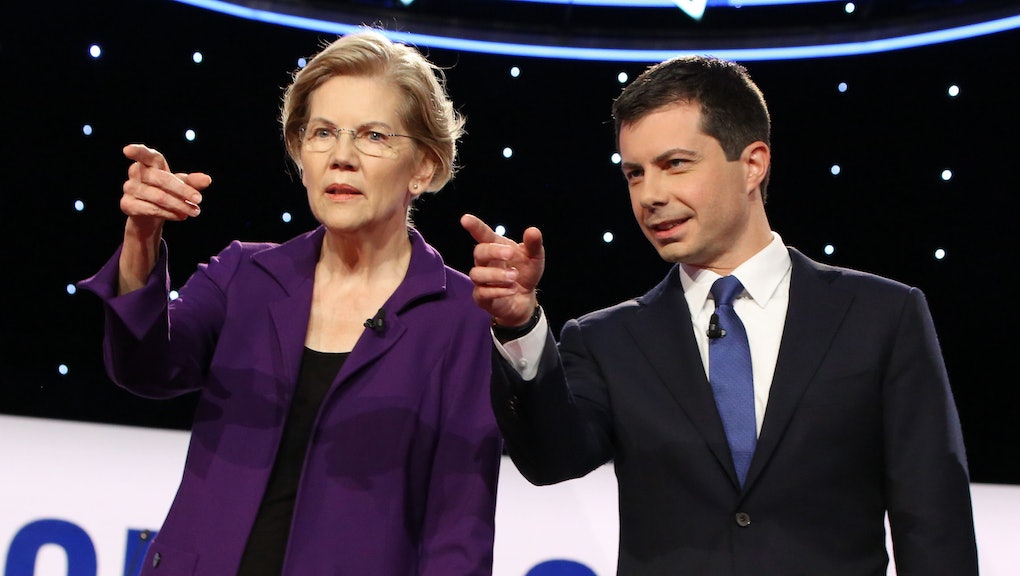 The fourth Democratic debate showed 2020 is about one thing: dreams vs. doability

Tuesday evening was jam-packed with televised sporting events. But as a veteran of national political campaigns, just one national competition was on my radar: the Democratic debate in Ohio, the fourth of this election cycle.

So, if you missed three hours of Democratic bickering in order to watch baseball: Don’t worry. I watched it for you. And here’s what you need to know.

This debate was, at its core, a fight over the future of the Democratic Party. Should the Democrats “dream big and fight hard” for progressive goals like Medicare-for-All, like Sens. Elizabeth Warren and Bernie Sanders urge, or, will the party follow South Bend Mayor Pete Buttigeg’s vision of moderation, reject what he calls “infinite partisan combat,” and focus on uniting a deeply divided country?

Debates involving a field of 12 tend to be less than substantive, but viewers witnessed a true shift in the race last night: Warren became the frontrunner. Though most national polling data still shows former Vice President Joe Biden with a slight though diminishing lead over Warren, many of the candidates on the debate stage made a clear calculation to attack Warren and then fight it out for the moderate votes previously thought belong to Biden.

The power shift was clear from the outset. Marc Lacey, national editor of The New York Times, immediately asked Warren the question she clearly does not want to answer: How will she pay for her Medicare-for-All plan? Warren consistently states that health-care costs will go down for middle-class families while increasing for the wealthiest Americans, but she’s been consistently reluctant to answer a direct question about whether taxes for the middle-class will result from this plan.

A savvy observer can surmise that the Warren health care plan will require a middle-class tax increase, but that she believes the increase will be offset by greater decreases in the overall cost of health care; it’s something that Sanders himself has acknowledged. But Warren, of course, is avoiding uttering an unfortunate sound bite that would be sure to feature in GOP attack ads. Still, Lacey’s query gave just about every candidate on the stage the opportunity to attack Warren with the fervor they had previously reserved for attack Biden — a sign of her increased political power.

Biden, meanwhile, failed to assuage concerns about his readiness for the job. Though he is no doubt the most experienced on the stage — a point he emphasized from the night’s beginning to the night’s end — he failed to actually convey that strength by tripping on his words throughout the debate. He used a familiar talking point about his readiness for the American presidency: “I’ll be ready on Day One,” he said. “I won’t require on-the-job training.” Political obsessives such as myself may recall Biden using those very same lines against Barack Obama in the 2008 election cycle.

While Biden faded into the background, he provided the other candidates angling for support from moderate Democratic voters opportunities to shine — chiefly, Buttigieg and Minnesota Sen. Amy Klobuchar. Viewers saw a shift in tone from Buttigieg, as he went on the attack early against Warren as well as former Texas Rep. Beto O’Rourke, with whom he’d sparred through the media in recent weeks. Buttigieg clearly believes he has a path to victory in this race. One of many open secrets of the primary debate stage is that every single candidate isn’t fully running for president; some are hoping to be tapped for vice president or a Cabinet secretary. While it remains to be seen whether Buttigieg can actually break into the top tier in the polls, with pointed attacks and a message shift, he made clear that he is running for the slot on the top of the ticket.

I’ve noted before that I’m utterly in awe of Buttigieg’s rhetorical talents. He used that gift to argue that he is uniquely positioned to unify the country after President Trump exits the Oval Office, and he leaned heavily on his hailing from the “industrial Midwest.” Imagining the day in January 2021 when Trump has left office, “it starts out feeling like a happy thought,” he said. “This particular brand of chaos and corruption will be over, but really think about where we’ll be: vulnerable, even more torn apart by politics than we are right now. ... I’m running to be the president who can turn the page and unify a dangerously polarized country.”

The subtext: None of these progressives can do what I can do, as a moderate with realistic proposals that are still better than the status quo. That’s a powerful argument against nominating one of the heroes of the left in Warren or Sanders.

Klobuchar had a similarly good night attacking the frontrunners from the moderate center. “The difference between a plan and a pipe dream is something that can actually get done,” said Klobuchar in response to Warren’s Medicare-for-All plan; Klobuchar endorses a strengthened Affordable Care Act that comes with the elusive public option Democrats failed to secure the first time around. She joined Buttigieg in touting her Midwestern credentials, and she attempted to turn Warren’s “happy warrior” ethos against her, repeatedly telling the Massachusetts senator that “there is more than one idea” and that just because her proposals don’t mirror Warren’s “doesn’t mean they’re not bold.”

The other elephant in the debate room was Sanders’s recent heart attack. For all candidates who face health questions, the 78-year-old put on a clinic in how to manage the challenge. He appeared vigorous and energetic as ever, responding to a question about his heart issues with his clarion call for a “political revolution.” He also touted a forthcoming rally with a “special guest” in Queens, New York; before he was even off the debate stage, his campaign leaked the news that New York Rep. Alexandria Ocasio-Cortez will endorse Sanders during the Oct. 20 event. This is a lesson for all candidates: A great way to take the wind out of a debate news cycle is to drop news of a powerful endorsement.

For the rest of the candidates — there are still seven we haven’t talked about yet — it’s now or never for them to break through. Many of those in the muddled middle have failed to decide whether they’re fully progressive or fully moderate, like O’Rourke and California Sen. Kamala Harris. By not being able to join one camp and lob attacks at the other, they’ve been largely stagnant in the polls and devoid of big, landscape-changing moments. After all, if they can’t define their campaigns, how are voters supposed to?

Overall, it may seem counterintuitive, but Warren did win the night. Even though she took on a number of sharp attacks, which she parried to varying degrees of effectiveness, when one candidate is the target of everyone else’s criticisms it confirms one thing: The media will from now portray her as the frontrunner.

Now, there is still plenty of time for change before the Feb. 3 Iowa caucuses. At this point in the 2008 cycle, for example, seasoned candidate Hillary Clinton had a double-digit lead over Barack Obama, the upstart Illinois senator. We all know how that turned out.

More like this
It appears once again that the Democrats are willing to tank their whole agenda because of "rules"
By Rafi Schwartz
Trump's brilliant 2022 strategy is for Republicans to get into a messy intra-party fight
By Rafi Schwartz
Vaccines are good. Threatening to evict someone over them is not
By Rafi Schwartz
Stay up to date