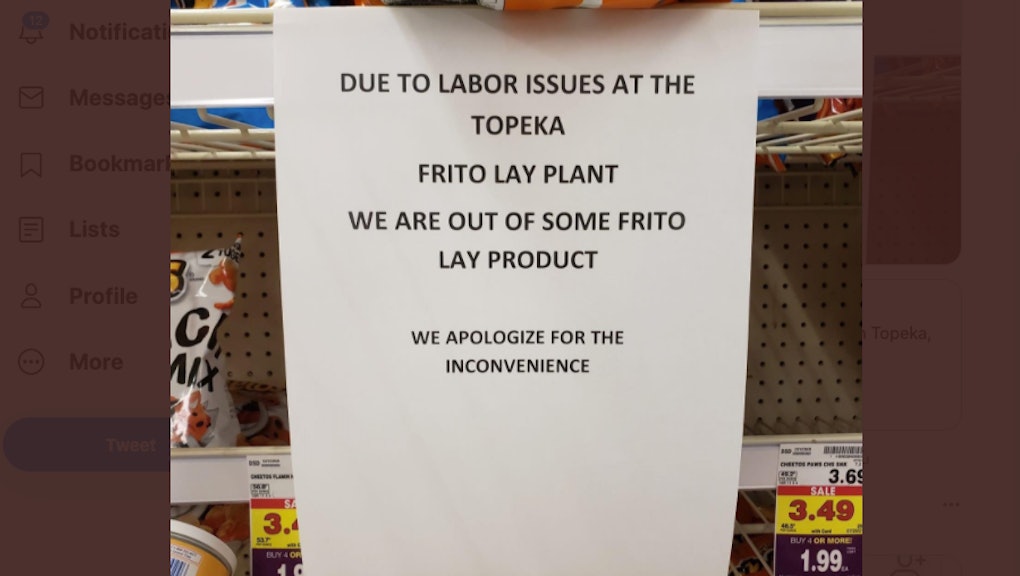 The Frito-Lay workers' strike has revealed some horrifying working conditions

In the United States, conversations about getting people back to work have dominated, as doing so is seen as a sign that the pandemic is finally ending. But as some states implement back-to-work bonuses, few are willing to acknowledge why people aren't in a rush to work again. In Kansas, however, Frito-Lay workers are leading a strike that sums up just about everything wrong with the U.S. labor industry. From complaints of low pay to a lack of benefits, workers are hoping to force the company to change its appalling working conditions.

On July 5, about 600 workers went on a union-led labor strike at a Frito-Lay plant in Topeka, Kansas. To put that into perspective, Food & Wine reported that's about 80% of the plant's full-time workforce. This being a union-led strike is significant, too: Although corporations often try painting unions are troublemakers, they don't really want their members to go on strike. After all, strikes can last a long time — Frito-Lay workers are coming up on their second week — and people aren't earning any money to support themselves while striking.

This is the first time that this union, Local 218 of the Bakery, Confectionary, Tobacco Workers, and Grain Millers union, has gone on strike since 1973. As the strike continues, some union members are taking money from their savings, turning to community for support, or even looking for other work. They don't, however, regret their decision.

"Those of us who are out here every day, there's a sacrifice we're making," Esther Fanning, a five-year employee of Frito-Lay, told The Topeka Capital-Journal. Over the weekend, Fanning's twins turned 9, and instead of having the usual party, "I made a sacrifice of having my kids' birthday here at the picket line. We had a little happy birthday. We had some ice-cream cake. I told my kids, 'When I leave you guys, I come to my family here at work.'"

There are a number of factors driving the current strike, including exhausting work hours. Mark McCarter, who works at the factory, told The Topeka Capital-Journal that Frito-Lay often makes employees work 12-hour days, seven days a week, sometimes with only eight hours between shifts. In an opinion piece published by the outlet, employee Cherie Renfro alleged, "When a co-worker collapsed and died, you had us move the body and put in another co-worker to keep the line going."

In addition to unreasonable hours, workers are also striking over poor wages. Labor Notes reported that in the past several year, most contracts have only included lump sum bonuses, which means people's wages haven't increased. Monk Drapeaux-Stewart, who began working at the Topeka factory 16 years ago, told the outlet that he's only gotten a 77-cent increase over the past 12 years.

"Fifteen, 20 years ago Frito-Lay had a really good reputation — all you need is a high school diploma and you've got this job with good pay and benefits," Drapeaux-Stewart said. "But slowly all of that has been whittled away."

While these are all important underlying factors for the strike, workers were ultimately motivated after voting down the company's latest proposed contract. Per Labor Notes, it only included a 2% wage increase for the year and a 60-hour-a-week cap for workers. The union's decision to vote down the contract came after nine months of negotiations.

As expected, Frito-Lay is less than ecstatic about the situation — and doing all it can to save face. The company told Food & Wine via email, "While the union has suggested that Frito-Lay didn't meet its terms, Frito-Lay had agreed to the union's proposed economic terms," adding that "each member of the union negotiating committee, including the union president, individually committed to supporting the agreement and encouraging Frito-Lay employees to vote in favor of ratifying it."

Frito-Lay went on to claim that the rejection of the contract by its members "suggests union leadership is out of touch with the sentiments of Frito-Lay employees" and "we do not anticipate any further negotiations with the union for the foreseeable future. ... Frito-Lay will be focused on continuing to run the operations of our plant in Topeka and has a contingency plan in place to ensure employee safety. We will continue to be attentive to the situation and welcome any employees who wish to continue to work as they are legally entitled to do so."

While Frito-Lay says it won't negotiate any further, the company may have to backtrack on that soon. It's no small thing for the majority of its workforce to strike at the Topeka factory. Already, grocery stores are seeing shortages of Frito-Lay products, which includes Cheetos, Doritos, Tostitos, and more.

In addition, the workers aren't being left to take on Frito-Lay alone, as other unions are supporting them, too. District 70 of the Machinists Union in Wichita, Kansas, posted a picture showing brands owned by PepsiCo, the parent company of Frito-Lay. On its Facebook, the union wrote, "Please consider not purchasing any Frito-Lay, Pepsi, Gatorade, Starbucks, Lipton, Tropicana, and Stacy’s products until a resolution or agreement is in place to protect the members and their family’s financial livelihoods."

Many others are also boycotting Frito-Lay or PepsiCo products. Monica Marks, a supporter of the boycott, even took a list of Frito-Lay and PepsiCo brands grocery shopping this week, telling The Wichita Eagle, "If we can avoid it, even with some adjustments, we won't cross a picket line. It's not that difficult to just buy a different brand of chips and soda."

More like this
Should public transit be free?
By Andy Crump
Guess how much Trump's companies made during his presidency!
By Rafi Schwartz
More than 200 GOP lawmakers asked the Supreme Court to overturn Roe v. Wade
By Rafi Schwartz
Stay up to date