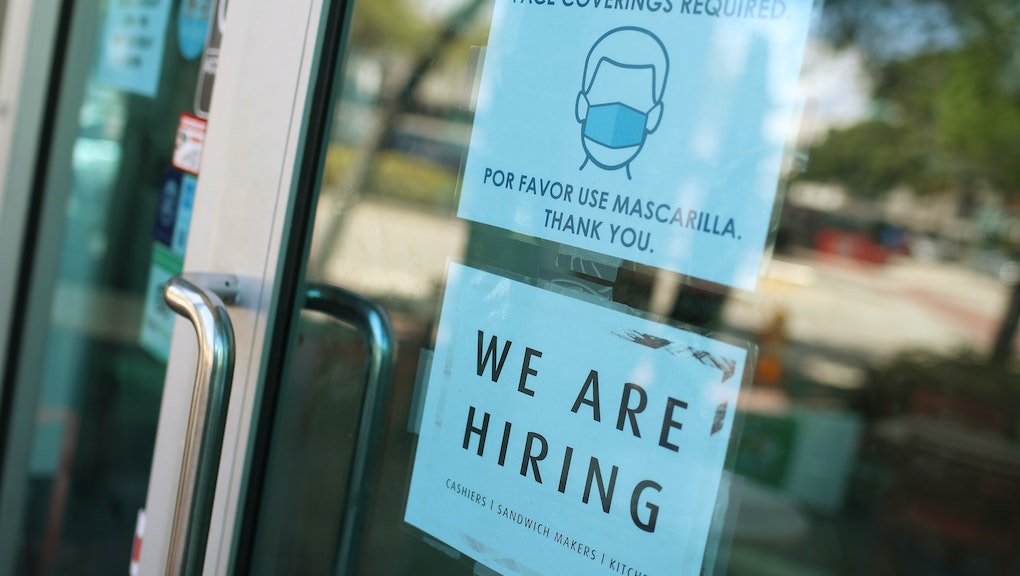 The real reasons employees aren't rushing back to work

Many conservatives have long believed that poor people — and especially Black poor people — are lazy deadbeats who will refuse to work unless forced to do so by an uncompromising government. In his 1976 presidential campaign, Ronald Reagan railed against the “welfare queen” — a woman he said was gaming welfare services even though she had “three new cars, a full-length mink coat ... [and was] estimated at a million dollars.”

The latest version of this argument has focused on stimulus aid in the pandemic. Conservative politicians have maintained that President Biden’s American Rescue Plan, which passed in March, was too generous, and that it has actually encouraged American workers to be idle and indolent. “Florida small business owners are all telling me the same thing, they can’t find people to fill available jobs. ... What does common sense tell you is the reason?” Florida Sen. Marco Rubio asked on Twitter.

For Rubio the answer was clear: People won’t work because stimulus money means they don’t have to. Following lackluster jobs numbers in April, Biden himself embraced this logic and promised to put in place more stringent work search requirements for people seeking unemployment benefits.

In short, politicians are panicking at the possibility that workers might have options. They want workers to be forced to labor or starve — even though around two-thirds of the population is not fully vaccinated, and staying home as much as possible remains vital for public health. A good economy shouldn’t be one in which workers have to risk their lives for little pay. Instead, it should be one where laborers are treated like human beings, and aren’t expected to sacrifice themselves on the altar of capitalism for the sake of business owners.

As for Rubio’s point: There is little reason to think that the problem with the economy is that workers are getting rich off stimulus checks and unemployment and thus refusing to work. Heidi Shierholz, the director of policy at the Economic Policy Institute, pointed out in a Twitter thread that when there is an actual labor shortage, business owners raise wages or lower job qualifications. If they refuse to do that, it doesn’t mean workers won’t work. It means they aren’t willing to work for low wages.

Empirical data backs this up. Economist Julia I. Lane, a professor at New York University, has been tracking records on unemployment claimants in Illinois to assess the effect of the stimulus. The data provides a wealth of information on millions of people, indicating previous employment history and earnings before and after unemployment.

“For each individual, we calculated their earnings on the benefits, relative to the earnings that they had before they went on the benefits,” she tells Mic. The researchers then looked at how quickly people moved into the labor force compared to stimulus payments as a proportion of former earnings. If people were staying home because the stimulus paid them more money than their work did, then you would expect people who made more from stimulus than salary to stay away from work longer. But that wasn’t the case. Lane and her team found no correlation between those who remained out of work and those whose stimulus payments came closer to their salaries.

Lane emphasizes that her analysis is preliminary and not yet peer-reviewed. But even when they controlled for geography to see if there were local pockets where people were staying home because of the stimulus, she and her co-authors found no correlation. “Individual businesses may be having problems hiring people,” Lane says. But the idea that that’s because stimulus checks and benefits are too high “is not borne out when looking at the data of literally millions of individuals over time.”

The pandemic stimulus did give some individuals more options, of course. But when you actually talk to workers, they aren’t sitting at home, contentedly counting their stimulus dollars. Instead, they’re trying to figure out how best to navigate a dangerous pandemic and a major economic downturn while protecting themselves and their families.

Joe Jacobs was working as a union meat-cutter in a Safeway grocery store in Colorado when the pandemic began. It was a high-risk, public-facing job. Meanwhile his girlfriend was working at an assisted-living facility. When she realized how dangerous the pandemic was likely to be, they decided Jacobs should take the unpaid leave of absence Safeway was offering. They were worried that if he became sick, he could infect his girlfriend — and through her, all the people she worked with. “The circumstances were: She’s in a nursing home, I’m in a butcher shop, which job are we going to keep?” Jacobs tells Mic.

Jacobs says the store called him back to work in January, before vaccines were widely available. He still felt it was unsafe, so he quit. Stimulus payments helped keep him afloat, but at this point he’s also had to rely on money from family and from his girlfriend. The experience of being ordered to return to a job at the risk of his life has soured him on butchery. “COVID forced a fork in the road in my career,” he says. “I'm considering whether I want to go back into an industry that operates that way.”

Pay has also been a factor for Jacobs in considering what to do next. Pre-pandemic, he was making $23 an hour. When he refused to come back pre-vaccine and risk his health, he lost that job, and the jobs he can find for meat cutters now are paying $13 to $16 an hour. “This is a huge step backwards,” he told me. “I just can’t do what I was trained to do, what I do well and competitively, for $14 an hour. At a certain point, I’m not selling that particular skill at that rate.”

“Working three jobs just to pay bills and to continue the cycle of working and coming home only to prepare for the next day of work ... I don't want that to be my future.”

Zeckariah McGinnis of Cleveland also had their work life thrown into chaos by the pandemic. They were working three part-time jobs at the beginning of 2020: massage therapist, cashier, and janitor. “Over the course of a week in March 2020 I lost all three jobs,” they tell Mic. Their financial situation was dire, but “I was honestly too afraid to look for work,” they say. They had some savings, but eventually had to borrow money from their parents for rent. The first stimulus check also helped. But it wasn’t until expanded unemployment benefits kicked in after three months or so that they were able to make ends meet.

More than a year later, only McGinnis’s job as a janitor has returned. “Aid is helping a lot,” they tell Mic. “I was able to pay off some medical debt as well as build up a small amount of savings. I feel really lucky that I have the luxury of considering other options than employment at the first place that takes an application.” With pandemic aid giving them room to breathe, McGinnis is also now thinking about going back to school. “The pandemic and resulting job loss led me to re-evaluate the things I thought were important or necessary,” they say. “Working three jobs just to pay bills and to continue the cycle of working and coming home only to prepare for the next day of work ... I don't want that to be my future.”

In an essay for Salon last July, Nikki Ervice, a former bartender in New York City, wrote about the emotional labor and low-key, constant disrespect hospitality workers endure, as well as “punishing hours and a pay structure that was created in feudal times.” For her, as for McGinnis and Jacobs, COVID forced her out of a job, and stimulus payments helped her take the opportunity to reassess her career choices. Without the payments, though, and without a partner who could help pay expenses, “I would have to weigh what it means to try to go it alone with no safety net, or else return to serving once the additional unemployment checks stop.”

For Republicans — and for Biden too — the idea that workers might be able to prioritize their health and safety and explore other options is anathema. From this perspective, business owners have no responsibility to pay decent wages or provide a safe environment, and workers are listless, lying frauds, who need to be starved and coerced into dangerous jobs for their own good.

But Jacobs and McGinnis aren’t lazy. They were working hard, and then the pandemic came along and made their jobs much more dangerous and precarious. Stimulus money helped them weather a brutal year. The additional support has also given them the ability to look for different, less exploitive, and perhaps more remunerative work. Only someone who hates workers, and wants them to be miserable, would see that as a bad thing.

More like this
Why are there protests in Colombia? How a tax proposal ignited decades of unrest
By Ray Levy Uyeda
Marco Rubio wants to give survivors of domestic terrorism … one year of student loan relief?
By Rafi Schwartz
Newly uncovered IRS documents reveal exactly how the rich swindle the rest of us
By AJ Dellinger
Stay up to date