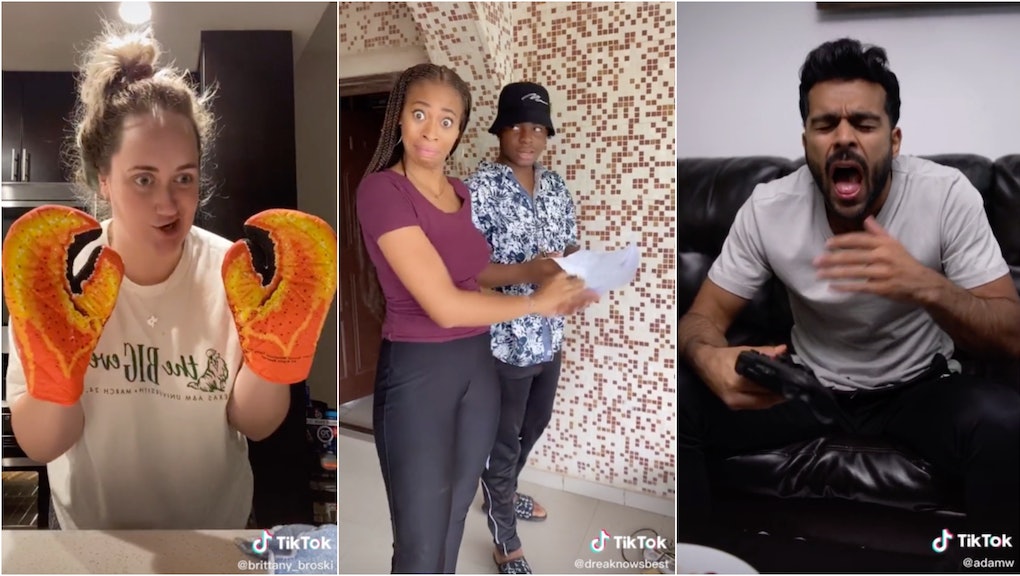 The funniest TikTok comedians to follow for a much-needed laugh

Tik Tok has undeniably changed the music industry. Lil Nas X famously exploded on the scene with “Old Town Road” last year, which rocketed to the top of the Billboard music charts and stayed there for 17 weeks — but it all started as a Tik Tok meme. Flash forward to this summer, and you’ve got Drake specifically manufacturing “Toosie Slide” to go viral on the platform.

But despite what my 12-year-old neighbor might tell you, Tik Tok isn’t just the domain of viral dance challenges. (She’s performed the “Carol Baskin” dance, set to the tune of Megan Thee Stallion’s “Savage,” for me about a billion times since it became a meme in April.) Tik Tok is also fertile ground for comedians, who are leveraging the platform’s short, snappy video format to make all sorts of weird and hilarious content. What’s especially exciting is that, till recently, most of the funny people with large followings on Tik Tok were totally unknown. The app is somewhat democratizing being discovered.

Logging on to Tik Tok for the first time can be a bit intimidating — the platform has a seemingly endless supply of 14-year-olds you’ve never heard of with millions of followers. But once you find a handful of creators that appeal to your interests, Tik Tok becomes an addicting trove. Here’s a roundup of the funniest accounts to follow on the platform, to inject some levity into your feed:

Real talk: Parker Kit Hill was the first creator I searched when I got Tik Tok. I’ve followed him on Instagram forever and am endlessly delighted by his goofy, often very leggy, antics. (Hill is represented by IMG Models and can rock a “lewk” as well as Naomi Campbell or Billy Porter.) Look out for the Tik Tok of him and Lizzo washing their hands together, it’s iconic.

Brittany Broski first went viral as “kombucha girl,” when a clip of her taste-testing the fizzy, fermented drink became a meme on “gay Twitter.” Her sudden Tik Tok fame last summer actually got her fired from her job working in trust and investment services at a bank. Within a month, she packed up her life and moved to LA. We love to see it!

Reggie Couz is a one-man improv troupe, churning out snappy comedy sketches where he plays all the parts. Look out for his recurring father-son scenes and a Tik Tok where Couz vastly improves a Geico commercial.

With more than four million followers, Drea Knows Best has become a sketch comedy phenomenon on Tik Tok, beloved for her relatable comedy rooted in the absurdity of everyday life. A personal favorite is a recent prank she played on her brother. Timeless!

Aussie comic Ricky Chainz epitomizes dad humor — but in a way that manages to be pretty adorable and not-at-all square. Bonus: lots of his Tik Toks feature his extremely cute kids.

Sarah Cooper became Tik Tok’s most famous Trump impersonator literally overnight this April, after her video, “How to Medical,” where she lip syncs the president’s infamous musings about eradicating coronavirus by shining UV light inside human bodies, went massively viral. Because there’s an infinite supply of audio clips of Trump saying insane things, Cooper has made the impersonations her schtick. She’s spookily good at them, too.

Meggie Foster is the British version of Sarah Cooper, basically. She got noticed for her “Bedtime with Boris” video, where she dubbed audio of Boris Johnson reading George Orwell’s 1984 to Theresa May. A personal favorite is a recent skit where Foster played BBC Breakfast host Naga Munchetty, who cut her own hair in quarantine to somewhat disastrous results.

Jeff the fish is depressed. “I don’t feel like swimming no more, man,” he laments to his buddy, another fish. “Don’t be thinking like that, man. We have to swim! We’re fish!” the ensuing pep talk begins. It’s a simple, genius sketch, with all the roles played by one dude, Kylen. And it’s been viewed more than 19 million times on Tik Tok. Kylen has lots more animal comedy where that came from: he’s dramatized the lives of spiders, mosquitos, and kangaroos, too.

Say hello to Tik Tok’s resident pun-master. Josh Alfred started the #dontleaveme challenge when he posted a video of himself standing on a leaf and quipping, “I’m on leave.” It sounds silly, but the ensuing pun parade Alfred has inspired on Tik Tok is pretty delightful.

Adam Waheed was a struggling comedian when he moved from Texas to Los Angeles three years ago. Now he’s one of Tik Tok’s most high-profile funny guys, with an audience of more than 7 million fans gobbling up his highly-edited slapstick comedy.

More like this
Kenya Barris and Issa Rae are changing the music industry with their new record labels
By Keith Nelson Jr.
The all-Black Bill Pickett Invitational Rodeo will air on national TV for the first time ever this Juneteenth
By Jewel Wicker
“Exhilarating, joyful, and of course pretty scary": Musicians on the pressures of returning to the stage
By Kelly McClure
Stay up to date