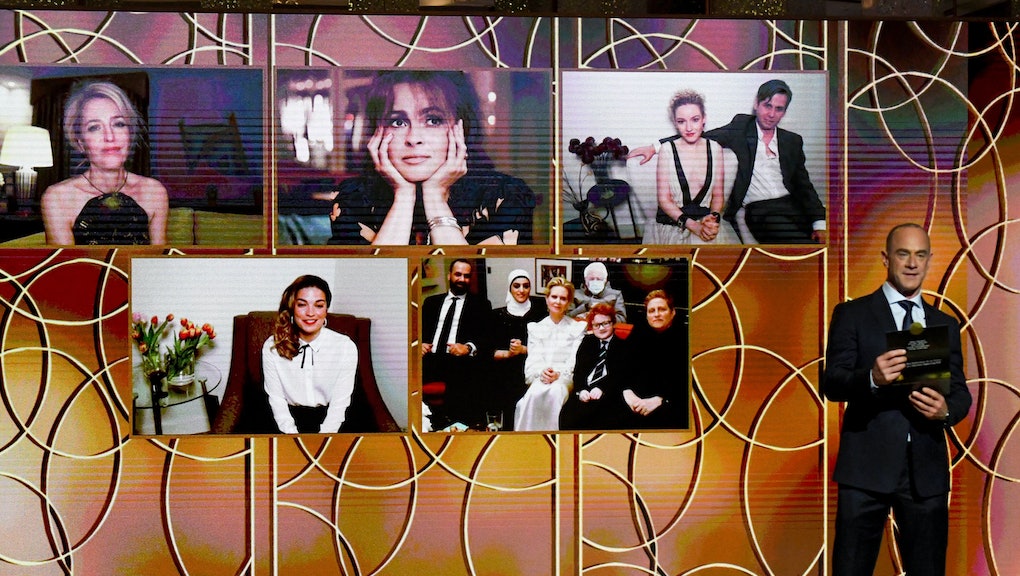 The Golden Globes are always the Oscars’ unbuttoned, freewheeling, tipsy cousin, so why would you expect it to go any differently over Zoom? With Tina Fey and Amy Poehler hosting on separate coasts and a vast majority of winners holed up in their living rooms or hotel rooms, it made for an even looser, shaggier award show than we’ve come to expect. There was established precedent for Zoom award shows, with last year’s remote and cringe-y Emmys, but this still pushed the format to its limits.

Fey and Poehler’s monologue and subsequent bits went off without a technical hitch, almost to cover for the celebs calling in from all over the world. Let’s see how that part went down.

The night’s first nice surprise came with Daniel Kaluuya winning Best Supporting Actor for Judas and the Black Messiah, a film the Globes otherwise ignored in its nominations. But Kaluuya’s speech began in silence, with the video call muted. When his sound was finally restored, after an awkward cutaway to Laura Dern back at the Beverly Hilton, he was heard repeating “You’re doing me dirty, you’re doing me dirty” — either directed at the Globes, flimsy tech, or no one in particular. Luckily, he was able to recover for a moving speech in honor of Fred Hampton’s life, and hopefully gets another shot at the Oscars in April.

Jason Sudeikis drowsy at home in a tie-dye hoodie

The way people talk about Ted Lasso on my Twitter feed, Jason Sudeikis could’ve at least considered the chance that he’d triumph in Best Actor in a Musical or Comedy Series, but the man still seemed deliriously off-guard by the whole thing. As a result, it made for one of the stranger moments of the night, with Sudeikis’s comfort matching the audience’s discomfort. Totally out of it, in a tie-dye hoodie, rambling on about Tolstoy and the concept of “Best Actor,” it was the kind of thing you’d only ever get at an at-home awards show.

Each category bantering in breakout rooms

The genius of award show seating arrangements: you get to sit at tables or in the same row with your guests, the people who made the movie or show you’re there for, and that’s it. This year’s Golden Globes introduced a new element of danger to this, with nominees hanging in the same Zoom breakout rooms with each other. Besides the sometimes-audible banter between them, it led to even better reaction shots, like Eugene Levy suppressing laughs during the Sudeikis speech, and Don Cheadle gesturing for him to hurry along. If you’ve ever wondered what that guy who played Prince Charles from The Crown might have to talk about with Al Pacino? Well…

King doesn’t have time for this stuff!

Regina King’s doggy hanging out in the background on the red carpet, the kids chilling on Jason Bateman’s lap, Catherine O’Hara’s husband playing with his phone during her speech. It was a sharp contrast in how seriously nominees were taking this stuff, ranging from Kate Hudson and the entire Kurt Russell extended family huddled in one place to celebrate Sia’s autism movie, while others seemed to be totally alone in a hotel room or windowless office. The Oscars have nearly two months to make sure it doesn’t go down quite like this, and seem adamant about going the in-person route, but maybe they should just stop fighting and let the pandemic Zoom times roll.

More like this
'The Nevers' will be so much better when Joss Whedon has nothing to do with it
By Kara Weisenstein
'Exterminate All the Brutes' is a messy, ambitious documentary that ties together genocide, white supremacy, colonialism ... and Josh Hartnett?
By Nicholas Russell
Nobody is more qualified to host 'Jeopardy!' than LeVar Burton
By Kara Weisenstein
Stay up to date