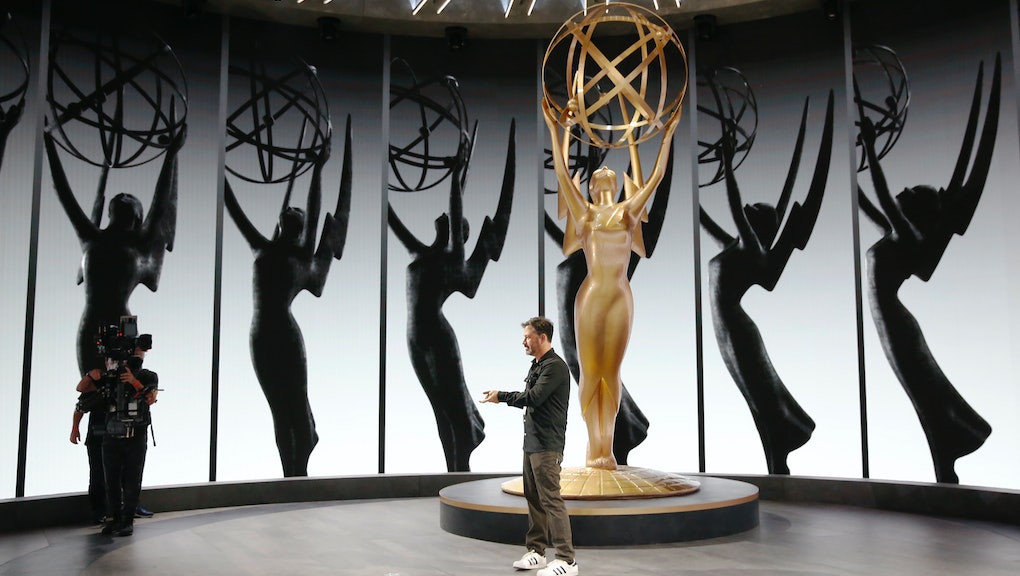 Embracing the laugh track, and five other ways to fix pandemic awards shows

It’s hard to believe, but the 2020 Emmys might have actually benefited from being as remote and strange as they were. With the night all but dominated by three shows in each of the major category types — Schitt’s Creek’s sweep, Watchmen, and Succession — you can see how the program’s later hours might have been monotonous in a packed theater. There were a few nice surprises late in the game — Zendaya! — but the Emmys’ greatest strengths were leaning into velocity and the organically off-kilter dynamics. That said: you still had some unbearably cringey moments, with Hollywood’s moneyed class straining through a generational pandemic, reckoning with racial injustice, and routine technical barriers. Since there’s no conceivable way it will be any safer to gather when the Golden Globes and Oscars take place next year, here are a few tips for fixing the Pandemic Awards Show:

For his monologue, Jimmy Kimmel leaned on the same kind of archival fake crowd footage and laugh track as Pete Buttigieg utilized while filling in for him earlier in the pandemic. It was extremely surreal and kind of sucked! That said, the rest of the studio segments would have overwhelmingly benefited from the fake crowd noise, as celebrity presenters like Jason Sudeikis, Randall Park, Sterling K. Brown, and more bombed so hard with uncomfortable silences. Although you’d hope something like Kimmel’s tasteless ICE joke would play to crickets in a full house, the silences were especially brutal on Sunday.

The VMAs tried to walk the delicate tightrope of staging outdoor, largely pre-recorded performances, while pretending that nothing was amiss. This didn’t exactly go as planned, and the Emmys were correct to lean into it with sanitation jokes and botched hazmat suit award deliveries. Even if these didn’t typically land, the awards steered from glibness by roping in some essential workers to present awards.

Let these people stay home with their rowdy families

By nature of having everyone on Zoom — and noticing which actors definitely didn’t have time for a remote awards show, like Cate Blanchett the god — the Emmys could never avoid the elephant in the room. And it was actually all the more fun for it! Kids bouncing off couches in the background, Succession showrunner Jesse Armstrong getting phone calls during his acceptance speech, Mark Ruffalo’s wife making his acceptance speech even more pure and sincere...all of this was good. I imagine it’s bittersweet to win an award from home, without the full pageantry, but with loved ones who wouldn’t have made the trip otherwise.

As anyone who’s ever won an Emmy might tell you, it’s a long walk from the crowd to the stage. This allows for a few seconds to gather composure that the webcam simply does not, so this year’s show led to some strong moments, like Zendaya’s incredibly disarming, rapid-fire acceptance, Jeremy Strong’s mid-speech kiss, and the Schitt’s Creek awards compound. Although Succession director Andrij Parekh came with overly prepared remarks, these speeches mostly felt looser and more spontaneous than usual.

Why would anyone wear a tuxedo if they don’t have to! The at-home Emmys brought a strange balance of dressed-up (Julia Garner’s Gatsby look, alongside Foster the People guy’s weird tiger print robe) and pure comfort. Presented with the choice to either dress up for their two-minute segment or keep it casual, a striking number of nominees stuck to the latter. In a way, this became more expressive and politically salient, with winners Regina King and Uzo Aduba both accepting their awards in t-shirts honoring Breonna Taylor. Then there was the more inscrutable Laura Linney, with a “VOTE” robe and the Chapo Trap House book on her end table. Amazing stuff.

A requirement, with a side of Bob Odenkirk in the wood shed.