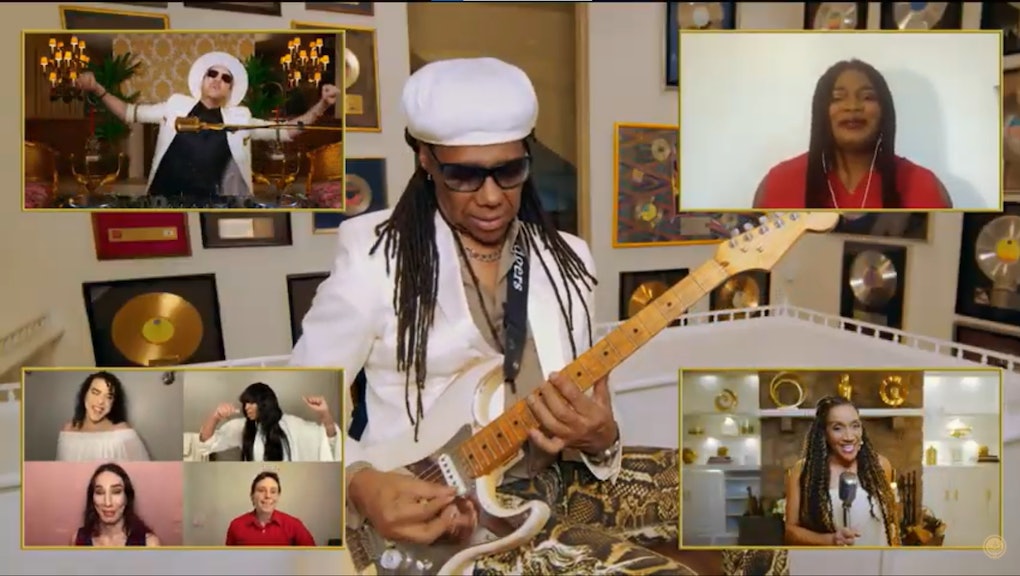 The inaugural virtual parade was just as bizarre as you expected

With the pandemic and military lockdown resting just outside the frame, Wednesday’s inauguration tried its mightiest to look like any other up on stage. Masks and minimal crowd density aside, it mostly functioned in this way — you had a par-for-the-course inaugural address from President Joe Biden that gestured toward a return to normalcy after unprecedented challenges. And yet the performances, in their stuffy, reliably formalized setting, leaned their fullest into the off-kilter.

Lady Gaga, in her best Hunger Games costume, gave the “Star-Spangled Banner” a mind-scrambling change in meter. Jennifer Lopez, pulling off an unofficial triple crown of national TV performances with last year's Super Bowl, New Year’s Eve, and the Inauguration, dropped a “Let’s Get Loud” nod right in the middle of her medley of “America the Beautiful” and “This Land Is Your Land.” And Garth Brooks, ever the apolitical country unifier, didn’t know quite where to go after his song, giving just about every living former president a maskless hug.

But when the presidential motorcade snaked through the Washington, D.C. streets to kick off the Parade Across America, there was no avoiding the singular weirdness of what was happening here. The Bidens eventually got out of their hulking new ride, with the president fist-bumping Al Roker and fielding some Wiffle ball questions from the sideline press corps. After they’d made their way into the White House, some broadcasts (and the online livestream) shifted gears to the virtual parade in all its unusual, pre-taped segment glory.

Continuing the theme of restoring every Obama cultural signifier at their disposal, the parade featured an early interlude from Jon Stewart, who interviewed dancing TikTok doctor Jason Campbell. Then, host Tony Goldwyn — president in the second-term Obama staple Scandal — introduced a barrage of unnerving pre-recorded clips from all over the country.

These performances sought to fill the space vacated by an in-person parade, often roping in groups like the U.S. Coast Guard Band and Culver Academies Black Horse Troops, that have a long history of marching in inaugural parades. But somehow, watching them march alone through an empty campus field, masked, didn’t quite evoke the intended calming effect.

Veering in tone from that of a local life-insurance commercial to Paul Verhoeven-esque military propaganda, the Parade Across America proved that a Trump presidency wouldn’t own a monopoly on strange, dystopian affectations. Jingoism and militaristic bluster are among the most bipartisan traditions, so an inaugural parade might as well be the most reliable reminder.

That said, the freedom to patch in groups from anywhere inevitably led to a more diverse and varied lineup of performers. You had cloggers atop the Blue Ridge Mountains in North Carolina, the nation’s first all-female Native American color guard down in Florida, and an elaborate crop design pledging for unity in Kansas. At past inaugurations, you likely wouldn’t have seen Andra Day singing “Rise Up” onscreen in Hollywood, as 10-year-old Kaitlyn Saunders skated over the Black Lives Matter plaza in D.C. Ditto that: certainly no other president would have the connection or willpower to get the New Radicals back together for another bridge-less crack at “You Get What You Give.”

Although I’m not the target audience for feel-good webcam performances, my soul only started to leave its body when someone named DJ Cassidy tried to slot his cheery ad-libs into Nile Rodgers and Kathy Sledge’s remote take on “We Are Family.” Rodgers, strumming away in front of his walls of gold records, appeared to be similarly over-it.

The virtual parade wound up exactly like you might expect: kind of sweet, kind of unnerving, with blinders mostly on to shield from the darkest challenges ahead. Let's hope it's the last of its kind.

More like this
COVID vaccine holdouts have a message to lawmakers: Show me the money
By Rafi Schwartz
Title IX will once again protect against gender identity discrimination
By Rafi Schwartz
Biden's pledges aren't enough to avoid the worst effects of climate change, new study says
By AJ Dellinger
Stay up to date