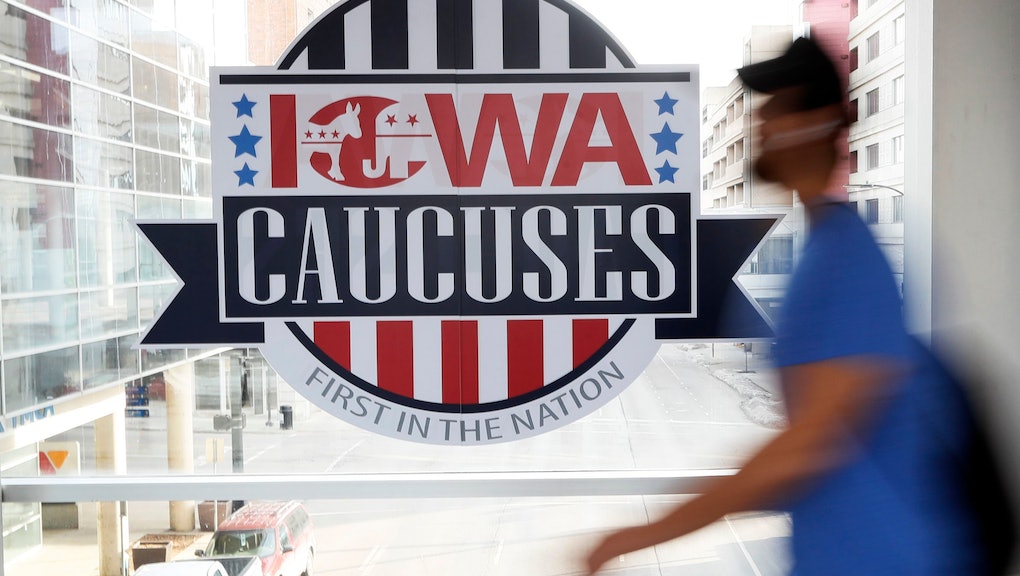 On Monday, thousands of voters took to schools, gymnasiums, and churches around the state in order to cast their vote in the Iowa's presidential caucus — a confusing process that has been called out as largely undemocratic — meant to kick off the 2020 presidential election cycle. On Tuesday, we still have no idea who won. Over the course of Monday evening, as votes were supposed to be tallied and the first delegates were to be assigned to candidates, the entire primary process hit a complete stand still thanks to the failure of an app created by Shadow, Inc. While the entire country continues to wait for vote tallies to be reported, we're now left with an entirely new problem: just what is this Iowa caucus app, what went wrong with it, and does it run the risk of compromising any future parts of the primary process?

Here is everything that we know about the app used during the Iowa caucus:

What was Shadow, Inc.'s app supposed to be used for?

The purpose of the mobile app was supposed to be a relatively simple and straightforward one: it was meant to be used to help precincts around the state of Iowa report their vote totals. The app was to be downloaded onto the personal phone of the chair of each caucus site (there are 1,700 of them across the state). They would use the app to report a series of numbers: the first alignment results — where every candidate is eligible to receive votes — and the second alignment after that, wherein candidates receiving less 15 percent of the vote are deemed nonviable and their voters are dispersed to the remaining viable options. At that point, a semi-complicated math equation is completed to determine how many delegates each candidate will receive from the district. All of that information would be reported via the app to the Iowa Democratic Party.

Of course, we know now that isn't what ended up happening. Instead, a system of voting that requires people to move their physical body to different corners of a physical location was completely upended by a software issue.

There are a number of things that could feasibly be blamed for the failure of the Iowa caucus app, starting with its hasty production. According to The New York Times, the application was put together in a matter of just two months — a panic move prompted by the Democratic National Committee ixnaying a proposed plan to report votes by having each caucus chair call in their totals to a central number. Officials in the state failed to adequately test the service before rolling it out to caucus chairs, per the Times, trusting that it would be capable of tallying votes when the time came.

And then the time came. The good news is that the app did not get hacked nor did it go down at any point during the vote reporting process — a genuine concern, given that many of America's electoral systems have been shown to be vulnerable. The bad news is basically everything else. According to reports from The New York Times, CNN, NBC and others, caucus chairs ran into a slew of issues with the app, including an inability to simply download it. Much of Iowa is rural and, according to BroadbandNow, nearly 20 percent of the state is underserved when it comes to high-speed internet options. This presented a problem not just in downloading and installing the app, but also in using it to attempt to report vote totals. Some claimed they were unable to login, while others said the app was buggy and didn't appear to work. According to TechCrunch, problems with the app were evident as early as 6:00 p.m. local time, but no clear alternative plan was in place for reporting information.

Theresa Payton, the CEO of cybersecurity consultancy firm Fortalice Solutions and the former Chief Information Officer for the White House during the George H. W. Bush administration, tells Mic, "There should have been worst-case-scenario testing, training sessions for caucus chairs, proven back-up procedures in case of a failure, technical support people stationed in the field to assist, and prior review by the [Department of Homeland Security] Security Team," much of which the Iowa Democratic Party appeared to forgo in introducing the app to the process. Payton says two months to build an app is "not enough time to address glitches, vulnerabilities, connectivity issues," and there's "no reason to be fool-hardy about the adoption of new technologies and processes." She noted that DHS has a division dedicated to election security that is available for all 50 states, should they want to use those resources.

Iowa Democratic Party chairman Troy Price chalked the problem up to a "coding issue" with the app. He said in a statement that "while the app was recording data accurately, it was reporting out only partial data." That apparent issue resulted in what Iowa Democratic Party spokesperson Mandy McClure referenced as "inconsistencies" in the data sets on Monday night. Those issues caused the party to opt to withhold results entirely until the situation could be sorted out — even though, according to the Times, about 35 percent of precincts had managed to report their vote totals by night's end, either through the app or through manual methods.

Who was responsible for the app?

While the app was commissioned by the Iowa Democratic Party in the lead up to the caucus, the party itself was not responsible for making the service. Reports from a number of outlets including the Los Angeles Times and The Wall Street Journal indicate that Shadow, a little-known startup with ties to prominent Democrats, was behind the app. Shadow appears to be staffed by Gerard Niemira and Krista Davis, two members of Hillary Clinton's 2016 campaign. The Wall Street Journal reported that state records show the Iowa Democratic Party paid Shadow $63,000 over the course of November and December, presumably to build the app meant to be used during the caucus process.

But the Iowa party isn't the only group to have paid Shadow. According to Federal Elections Commissions filings, Pete Buttigieg's campaign also gave the company $42,500 in July 2019 for “software rights and subscriptions.” (Joe Biden's campaign also contracted with the company to the tune of $1,225, per Forbes.). The details of those dealings are unknown, and the financial ties between Buttigieg's campaign and the company responsible for tallying votes across Iowa has launched numerous conspiracies about the connection, driven in part by Mayor Pete making a victory speech in Iowa when next to no information was publicly available.

It's likely that there is little to these theories — campaigns have representatives at most caucus sites and likely tallied the votes on their own, and each precinct has a paper trail of their votes, so there is no real way to game the system or get ahead of the vote tallies. While that information is largely incomplete — the Bernie Sanders campaign released totals accounting for about 40 percent of caucuses, for instance — it's accessible via the paper ballots kept at each site. Campaigns simply compile it on their own to produce the closest facsimile of the real totals that they can.

While there likely isn't a conspiracy tied to Shadow, the group definitely has some deep ties within the Democratic Party. Shadow is tied to ACRONYM, a Democratic nonprofit organization founded in 2017 that states its goal is "building power and digital infrastructure for the progressive movement." ACRONYM was co-founded by Tara McGowan, a former digital producer who worked on Barack Obama's campaign in 2016. On its website, ACRONYM acknowledges that it "invested in Shadow, a tech company focused on enabling organizers to run smarter campaigns" back in January 2019. However, as Shadow has taken center stage in the Iowa caucus fiasco, ACRONYM is backing away from it. In a statement, the company said it "has not provided any technology to the Iowa Democratic Party" and is simply an investor.

Is the app being used anywhere else?

All of this trouble looms large with another caucus in Nevada just a few weeks away. The state was expected to use a similar app to help report their results across the state. In fact, CNN reported that the same app made by Shadow was slated to be used in the Feb. 22 caucus. But on Tuesday the Nevada State Democratic Party made it clear that it will not be working with Shadow. "We will not be employing the same app or vendor used in the Iowa caucus," party chair William McCurdy II said in a statement. "We have already developed a series of backups and redundant reporting systems and are currently evaluating the best path forward."

Payton says that "no system is perfect" and "there’s always a risk that something will go wrong." While the situation in Iowa shouldn't deter states from trying to find way to reduce inaccuracies in our electoral systems, Paytons warns, "we shouldn’t be so quick to swing from one system to another as a solution to security issues."

"Of course we’d like to get to a place in this country where true mobile voting is an option. But what this proves beyond a doubt is that we’re not there yet," she says. "There are still problems to be solved and contingencies to be planned for."

And given that Shadow appears to be working or has worked with other members of the Democratic field and has roots within the party's establishment, it's possible that the company will crop up again at some point in the future. It certainly seems to believe that it's not going anywhere: a job listing from the firm looking for a "Client Success Representative" appeared on Tuesday morning.