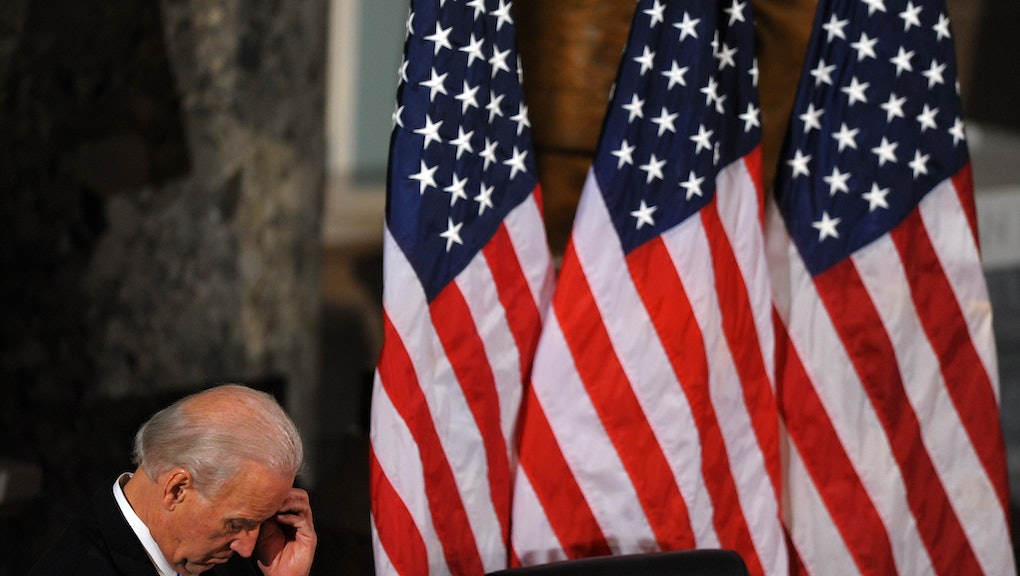 Alexandra Tara Reade has been trying to tell her story for years: In 1993, when she was in her mid-twenties and working as a staff assistant to Joe Biden, then a senator for Delaware, Reade says Biden sexually assaulted her. Biden pressed her up against a wall and digitally penetrated her without her consent, she alleges.

“It happened all at once, and then … his hands were on me and underneath my clothes,” Reade told the writer Katie Halper in an interview on Halper's podcast. “I looked up to him, he was like my father’s age. He was this champion of women’s rights in my eyes, and I couldn't believe it was happening," she said, describing how Biden seemed angry after she pulled away from him. “I wanted to be a senator; I didn’t want to sleep with one.”

The clip aired Wednesday. Reade first publicly told a story of inappropriate conduct on Biden's part last year, saying Biden "used to put his hand on my shoulder and run his finger up my neck." His advances made her feel uncomfortable, she said, and she reported the behavior to Senate personnel. But as a result, she said, her life was made "hell" and she decided to leave her position on Biden's staff.

Reade said she was motivated to share her own experience with the former vice president after Lucy Flores, a former Nevada state assemblywoman, wrote last March at The Cut that Biden had sniffed her hair and kissed the back of her head while just offstage at a 2014 rally.

Mic reached out to Biden's campaign for comment about the allegations but did not receive an immediate response. He has not offered any public comment on Reade's allegations since the Halper interview aired earlier this week.

Reade approached the Time's Up Legal Defense Fund in late January of this year asking for public relations assistance, and her allegations against Biden have been given new life by a report from The Intercept that was published earlier this week. In it, The Intercept writes that the Time's Up Legal Defense Fund refused to pursue Reade's case out of fear that doing so might jeopardize their nonprofit status. According to the Internal Revenue Service, "organizations are absolutely prohibited from directly or indirectly participating in, or intervening in, any political campaign on behalf of (or in opposition to) any candidate for elective public office," and Time's Up was concerned because of Biden's status as a candidate for the Democratic presidential nomination.

"While we were engaged with her, we informed Ms. Reade of our inability to fund legal and PR fees for her due to our 501(c)(3) status," Uma M. Iyer, a spokesperson for the National Women's Law Center, which oversees Time's Up, told Mic in an email. "That status mandates a strict and absolute prohibition on participating in electioneering or political campaign activity, and in this situation, we were dealing with the involvement of a candidate and close proximity to primary elections. Despite that decision, Ms. Reade continued to engage with us in trying to find attorneys until our conversation with her on March 2, after which we have not heard from her."

Iyer maintained that Time's Up is intensely focused on employer-employee issues, like Reade's case with Biden. "The Time's Up Legal Defense Fund tries to shift this power dynamic by giving workers access to attorneys, funding certain cases, and lifting up those stories; we do not investigate anyone nor do we take on cases ourselves," Iyer said. "National Women’s Law Center wants to be clear that our commitment to helping workers facing sexual harassment is unwavering and it is one of our core values that every survivor has a right to tell their story and seek justice."

While The Intercept's report raised some new questions about Time's Up, it also revived an old but surprisingly under-the-radar story about Biden. This is not the first time that the former vice president has been accused of inappropriate behavior toward women. Flores went public with her experience in 2019, and another woman named Amy Lappos said about a week later that during a 2009 fundraiser, Biden touched her face and rubbed noses with her.

In response to Flores's claim, Biden released a statement in late May 2019 saying that he had never acted inappropriately during his career, and that he would remain the "strongest advocate" for the "rights of women," citing his work advocating for the Violence Against Women Act (VAWA). He also said in the statement that he would "continue to surround myself with trusted women advisers."

With these allegations resurfacing right as Biden has effectively been confirmed as the presumptive Democratic presidential nominee, it raises thorny questions for a Democratic Party that has spent the last five years railing about Donald Trump's unfitness for office in part because of his alleged frequent sexually predatory behavior.

In October 2016, an Access Hollywood tape from 2005 was leaked on which Trump had been recorded bragging about his ability to assault women because he was a "celebrity." The Democratic Party seized on this moment to publicly demonstrate their zero-tolerance policy when it comes to sexual harassment and assault — and has continued to point out the many credible allegations against Trump to this day. That stance was put to the test in November 2017, when a radio host came forward with allegations against Al Franken, then a Democratic senator for Minnesota. Sen. Kirsten Gillibrand (D-N.Y.) led the charge in calling for Franken's resignation, which he eventually submitted. But at the time, Gillibrand faced pushback from Democratic leaders who said that losing a Democratic seat in the Senate was not worth it.

At the time, Democrats' call for Franken's resignation functioned as a response to Trump's election — they didn't want to be seen as going back on their word. But now, with Trump's re-election hanging in the balance, Democrats may feel that the stakes are too high to take the Franken approach with Biden. The fact that the party's almost-certain presidential nominee has been allowed to go several days without answering to a credible allegation of rape is appalling — and it demonstrates that in Washington, sometimes believing women is more about political expediency than human justice.