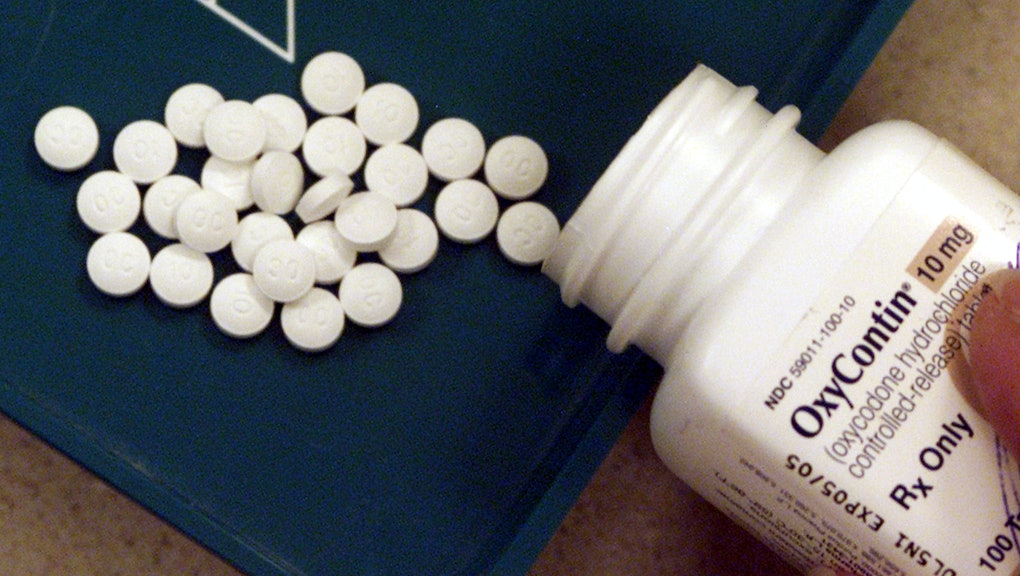 The maker of OxyContin has a curious plan to redeem itself

Late last night, Purdue Pharma, the maker of OxyContin, filed a bankruptcy plan that would effectively dissolve the company. It would mean that the company that makes OxyContin would pay more than $4 billion towards settling injury claims, reimbursing tribal, state, and city governments for the cost of dealing with the opioid epidemic. They'd also create a new company that would create and distribute drugs used to treat addiction, NPR reported.

In case you don’t know, a bankruptcy proposal is required when a company can’t pay its debts and needs to make a deal with the people — and other entities — that it owes money to, which in this case, is quite a few. Why should we care that this corporate drug peddler might go out of business? Well, the company currently has over individual 614,000 claims against it, so that’s a lot of people and families that feel they’ve been harmed.

Perdue’s proposition, which has yet to be approved by the federal bankruptcy court, is designed to put an end to the many lawsuits against the company, NPR reported. It offers $500 million cash up front to settle claims and $4.2 billion in installments through 2024.

The 324-page document details Purdue’s proposal for the Sackler family — yes, those Sacklers — to relinquish control of the company, NPR reported. According to the plan, a new company, unaffiliated with the Sacklers, would be created that would continue to manufacture OxyContin and other medications and which would provide drugs like naloxone and buprenorphine — which are used to treat addiction and overdose — at low cost to communities. The profits of this new company would be funneled into trusts, NPR reported.

"With drug overdoses still at record levels, it is past time to put Purdue's assets to work addressing the crisis," Purdue Pharma president, Steve Miller, said in a statement. The company valued the settlement at over $10 billion, which includes the value of the discounted addiction medications the company promises to deliver. Sounds good, right? But critics argue that the company is offering low cost drugs instead of the cash that many communities would prefer, NPR reported.

Unfortunately, some experts in the field of addiction feel that Purdue’s proposed scheme won’t actually address many of the real problems that people struggling with addiction face. “This may be a good political move for that company, but it’s not going to have an impact on individuals’ lives. It’s great for the drugs [that treat addiction] to be low cost, but we know that there are a lot of psychosocial factors that play into addiction and ancillary services that are required to treat it. It feels like a political stunt,” says Carl Hart, a neuroscientist and professor of psychology and psychiatry at Columbia University.

Two dozen state attorneys general rejected the plan immediately, NPR reported. "What the Sacklers are offering is a way for the payments to be structured that makes it convenient for them," Massachusetts Attorney General, Maura Healey, told NPR. Other lawmakers agreed that the plan does not go far enough or offer enough money.

The other catch here is that while the Sacklers would have to give up ownership of the company, they would only have to give up domestic operations, which means that the family could continue to turn a profit in other countries. Not only that, but the Sacklers themselves would not have to admit to any wrongdoing and would remain one of the wealthiest families in the U.S., NPR reported. That means that even though Purdue Pharma has already admitted twice to illegally marketing opioid medications in plea deals they made with the Justice department, the rich white drug dealers — the Sacklers — who own Purdue, will not personally take any blame for their involvement.

So, while this proposed bankruptcy settlement may offer a tiny Band-Aid to cover up the suffering of millions of people, it just seems like more evidence that the elite get treated differently. There isn’t any research about the economic disparity in drug conviction rates when it comes to the ultra-wealthy, but research shows that Black people are 5-7 times more likely to be convicted of a drug offense than white people. One in five incarcerated people are currently locked up for drug offenses, but the Sacklers — potentially the shadiest drug dealers in history — could walk away from this bankruptcy without feeling a pinch.

More like this
Having a bad trip? This hotline can help you find your chill
By Melissa Pandika
COVID-19 vaccine drug interactions: Is there anything I should avoid?
By Joseph Lamour
How long a weed high lasts, according to science
By Melissa Pandika
Stay up to date