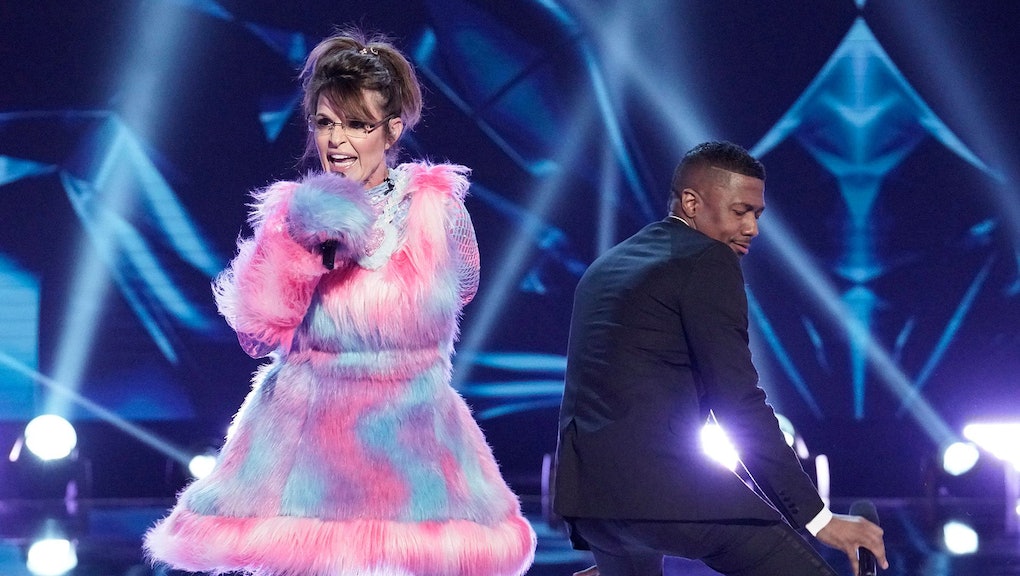 'The Masked Singer' was the ghoulish pop-culture phenomenon 2020 deserved

Everyone had their own moment when it sunk in that we’d be here for a while. For most, it came on March 11, with the trifecta of Tom Hanks's positive test, the NBA suspending its season, and the U.S. travel ban. But this realization was punctuated by something completely unrelated to the surging pandemic. Right before President Trump hit the airwaves to confuse Americans traveling the globe, in his biennial attempt at hushed-tone gravitas, another right-wing darling performed for national audiences on Fox. Sarah Palin, former governor of Alaska and vice-presidential candidate, was rapping “Baby Got Back” in a psychedelic bear suit.

There was an impulse to label this sequence as a distinctly 2020 sort of dystopia: incredible yet completely understandable, the logical result of the past two decades in spectacle-driven, "reality"-based American culture. Palin, no stranger to the limelight or reality TV shame, didn’t know that her latest stab at mainstream rehabilitation would overlap with the night when everything became tangibly worse in ways outside of her control.

Unlike Dancing with the Stars, The Masked Singer offers equal-opportunity humiliation, with nearly every contestant explaining away their appearance after the unmasking — Ice T, the first contestant revealed on The Masked Dancer, said his kid is a fan, and that Lil Wayne and Busta Rhymes’s appearances opened the door for acceptability. In that context, Palin's flirtation with show business gets something of a pass compared to the much more odious second-chance offered to Sean Spicer by DWTS and the Emmys.

As television goes, The Masked Singer isn’t quite watchable — most episodes run between 30 and 80 minutes too long; the payoffs hit too infrequently; and Nick Cannon remains one of the least talented entertainers working today. Despite thousands of amateur sleuths on social media and in the YouTube comments, the show remains charmingly indiscreet in revealing who’s under the mask through a series of pre-performance clues. But distill the show into a series of clips, or better yet, tune into an episode's final moments, and suddenly it's essential viewing.

Since getting an antenna attachment for our Roku, it’s hard to think of a better live television moment than when Mickey Rourke, of all people, ripped off the mask to disqualify himself in the fourth season's second episode. With a lipstick mark on his rubbery face, Rourke added true mischief to the proceedings, laughing with Robin Thicke about some likely unsafe-for-TV debauchery they took partook in down in Miami, before hurrying offstage unannounced.

This occurred during the show’s second season of the year, and first without a studio audience. But if you were watching at home, it wouldn’t necessarily register. In keeping with The Masked Singer’s commitment to garish artifice, the producers recycled old crowd reaction shots from past seasons, masking that the panel of judges, Cannon, and these elaborately costumed C-listers perform in an empty auditorium. Given how stilted and detached the judges’ banter with Cannon felt in past seasons, I’d always doubted that they were really all filming in the same room together — now it was somewhat true.

Considering the reality singing world’s earlier quarantine-friendly attempts — the remote American Idol finale, for instance, in which the runner-up seemed to think they’d won and Lionel Richie was projected onto the Grand Canyon — this was the only feasible way to keep the Masked Singer going. Skepticism of the safety of any film and TV production right now is warranted, but Fox seems assured enough in the practice and viewership of these oddball musical shows to take it all the way.

It’s not uncommon for spin-offs to reign supreme — just think of how many Law and Order and CSI offshoots networks have unloaded over the past few decades — but you don’t often see a major network reorient its primetime schedule to such an extent. In addition to two seasons of The Masked Singer annually, there’s I Can See Your Voice, a Ken Jeong-hosted show that asks a contestant to sort out good singers from bad, based on lip-syncing alone; The Masked Dancer, identical in premise and Jeong involvement to Singer, but with dancing; and an upcoming revival of Name That Tune with Jane Krakowski and a new-look Randy Jackson.

With its bevy of Singer derivatives — and Beat Shazam, the Jamie Foxx-hosted show that infamously featured a contestant winning by identifying the Fray’s “How to Save a Life,” months before his death — Fox's slate of programming may seem like TV's nadir. But there’s no sense in pretending it isn’t anything less than what the moment demands. With more conventional reality singing contests failing to launch credible pop careers, the next best thing is watching marginal stars of decades past fight for whatever scraps remain in a snow owl suit.