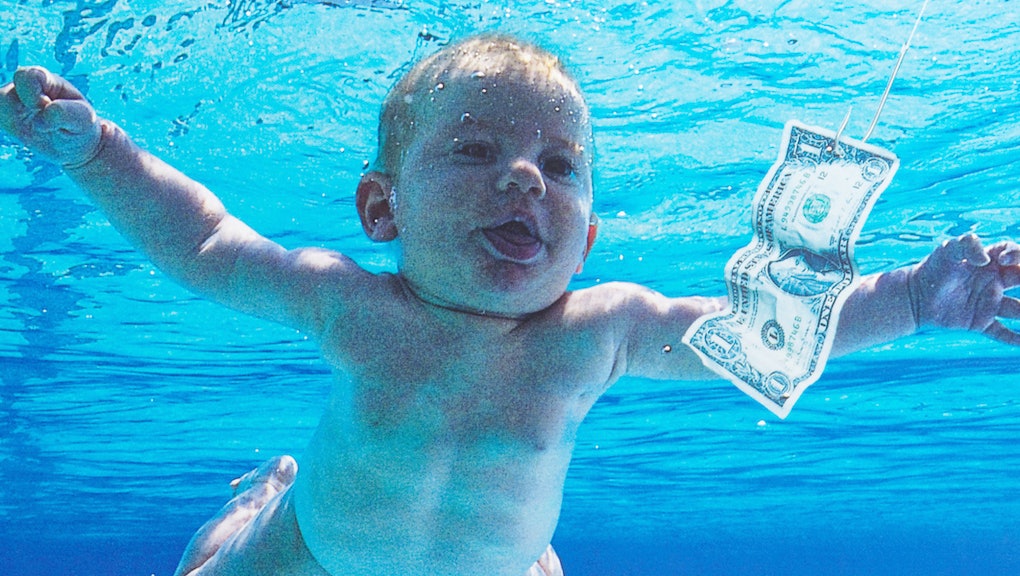 The 'Nevermind' baby is suing Nirvana for child sexual exploitation

It's an iconic rock and roll image: a nude baby boy floats in a cerulean swimming pool, reaching for a dollar bill suspended by a fishing line. But to "celebrate" the 30th anniversary of Nirvana's 1991 album Nevermind, the man who appeared on its cover as an infant is suing the band. Spencer Elden claims Nirvana violated federal child pornography statutes and argues he was subjected to child sexual exploitation. He's asking for either $150,000 from each of the 15 defendants named in his lawsuit, including the surviving band members and Kurt Cobain's estate, or unspecified damages to be determined at trial.

Elden's parents are the reason he ended up on the Nevermind cover. His father knew underwater photographer Kirk Weddle, who asked the couple if he could use their four-month-old baby as a model in a photoshoot for an up-and-coming band. The Eldens were reportedly paid $200 and the session lasted roughly 15 seconds. The dollar on fishing line was digitally added later. Weddle originally tried photographing babies at a swim class, but it was the image of young Spencer that captured the edgy vibe Geffen Records was going for.

It seems like Elden has had mixed feelings about his accidental fame over the years. He's recreated the pool image numerous times in his life and has "Nevermind" tattooed on his chest. For the album's 25th anniversary, photographer John Chapple paid him $200 to dive in again. "I said to the photographer, 'Let’s do it naked.' But he thought that would be weird, so I wore my swim shorts," Elden told the New York Post in 2016.

But the unwitting star of the Nevermind cover said it trips him out to think about how little and how much he had to do with the album all at once. "It’s hard not to get upset when you hear how much money was involved," he told TIME magazine in 2016. "[When] I go to a baseball game and think about it: 'Man, everybody at this baseball game has probably seen my little baby penis,' I feel like I got part of my human rights revoked." More than 30 million copies of Nevermind have been sold worldwide.

Around the 25th anniversary, Elden tried pursuing legal action against Geffen Records but was unsuccessful. "It’s fucked up," he told GQ Australia at the time. "I’m pissed off about it, to be honest." His new suit names not only Nirvana's remaining members and Cobain's estate, but also the photographer, Weddle, and the labels behind Nevermind. Elden claims he's suffered "lifelong damages" and argues his legal guardians never signed a release "authorizing the use of any images of Spencer or of his likeness, and certainly not of commercial child pornography depicting him." He's also suing for negligence and described the use of his photo a "sex trafficking venture."

It's certainly a thorny issue that raises a lot of questions about who owns your image and consent. But the saga of the Nevermind baby also raises the question of why he isn't suing his parents instead. (The answer obviously has to do with money.) After all, they're the ones who agreed to throw their baby in a pool to make art for some band.