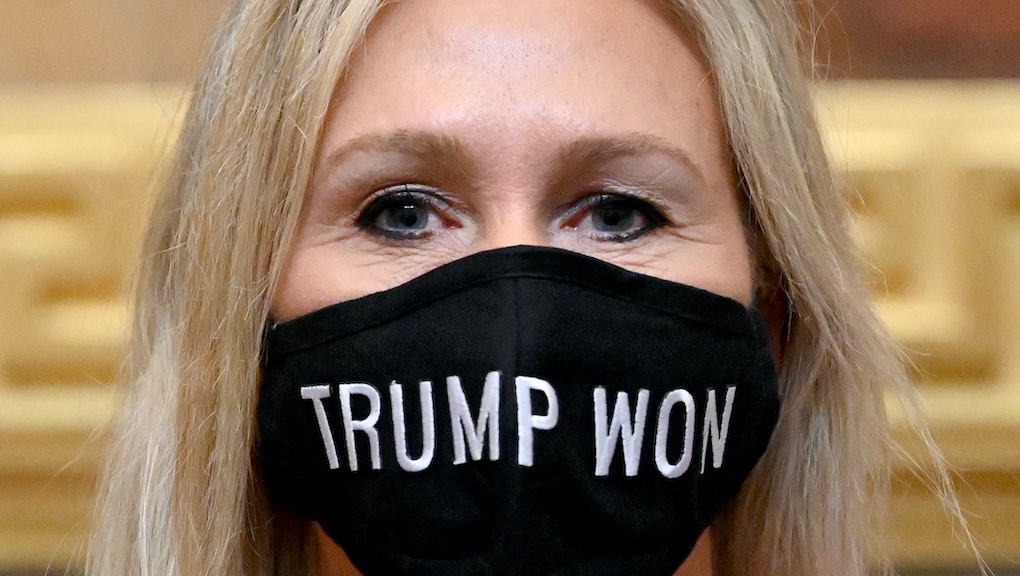 Would it shock you to learn that two of the worst, most unhinged, most virulent nativists in politics have been linked to a new congressional caucus that lauds "European architecture" and "uniquely Anglo-Saxon political traditions"? No? It wouldn't shock you at all? Huh.

And if you guessed I was talking about Marjorie "Jewish space lasers" Taylor Greene and Paul "my entire family hates me" Gosar, well, double points for you. Because according to the D.C. insider newsletteratti at Punchbowl News, Gosar and Greene have been linked to a newly formed "America First Caucus" that offers some of the most nakedly bigoted — and pathetically stupid — political positions I've seen in a long, long time.

Per the caucus's policy platform document, obtained by Punchbowl, "the America First Caucus exists to promote congressional policies that are to the long-term benefit of the American nation," which is truly a radical declaration for, uh, lawmakers serving the, um, United States of America.

But I digress. Because, while the idea that a congressional caucus should serve the interests of the nation in which it exists is a fairly unremarkable one, the rest of the America First platform is coo-coo-bananas.

Here's what the caucus says about "sovereignty" (emphasis mine):

America was founded on the basis of individual and state sovereignty, to ensure that no free American would be lorded over by a monarch ever again. Unfortunately, bureaucrats in Washington, D.C., and the elites who control them have risen to form a new oligarchy — one that is far more decadent, corrosive, and hostile to the will of the people than the Founders could have ever dreamed of. This is why sovereignty is of paramount importance to the AFC.

Middle school book report-level prose aside, the insinuation of a shadowy cabal of "decadent" "elites" who are "hostile to the will of the people" is awwwwwfully close to the sort of stuff you'd find in the comments section of a Nazi message board.

Let's keep going! How about "immigration"? Emphasis, again, mine:

The America First Caucus recognizes that our country is more than a mass of consumers or a series of abstract ideas. America is a nation with a border, and a culture, strengthened by a common respect for uniquely Anglo-Saxon political traditions. History has shown that societal trust and political unity are threatened when foreign citizens are imported en-masse into a country, particularly without institutional support for assimilation and an expansive welfare state to bail them out should they fail to contribute positively to the country. While certain economic and financial interest groups benefit immensely from mass immigration, legal as well as illegal, and the aggregate output of the country increases, the reality of large segments of our society as well as the long-term existential future of America as a unique country with a unique culture and a unique identity being put at unnecessary risk is something our leaders can afford to ignore no longer.

If this sounds similar to the "Great Replacement Theory" espoused by literal white nationalists, that's because that's exactly what it is! Remember when the Nazis marched through Charlottesville, Virginia, shouting "Jews will not replace us"? Bad, right? Well congratulations, there's a House caucus for that now.

Moving on to one of my personal favorites, "infrastructure"! As usual, emphasis, mine, etc.:

The America First Caucus will work towards an infrastructure that reflects the architectural, engineering, and aesthetic value that befits the progeny of European architecture, whereby public infrastructure must be utilitarian as well as stunningly, classically beautiful, befitting a world power and source of freedom. As the Romans demonstrated with aqueducts, walls, and roads, function and beauty are not at odds. Federally funded infrastructure, including roads, buildings, airports, seaports, bridges, should demonstrate a pride of workmanship. A bridge is not merely something to cross from side A to side B, it is a connection among peoples.

Ah yes, because nothing says "America First" quite like wanting the streets of Akron, Ohio, to look more like Luxembourg. And as the Romans demonstrated, once you combine form and function, your empire will exist forever and ever without any problems ever again. The end!

The America First Caucus recognizes that America can no longer afford to be the world’s policeman. Instead of endless interventions, bold diplomatic endeavors must be undertaken with countries such as Russia and North Korea to ensure a more peaceful and stable world. America should not be sacrificing blood and treasure while our so-called allies refuse to pull their weight in contributing toward neutralizing threatening actors in the world. America must remain a free and independent republic, not a globalist watchdog.

"Globalist dogwhistle" notwithstanding, invoking America's "blood and treasure" is a like a bizarre mutant hybrid between Nazi shibboleths and swashbuckling adventuring. It's just weird, guys!

Anyway, so far the full roster of "America First Caucus" remains a mystery, either because it hasn't actually been connected to anyone in Congress beyond Gosar and Greene, or because all its members are too damn embarrassed to let the world know they're a part of this club of loonies. Either way: Off to a great start!

More like this
Matt Gaetz's alleged sex party pal is officially cooperating with the feds
By Rafi Schwartz
Marjorie Taylor Greene and her team are just openly accosting people in Congress now
By Rafi Schwartz
Buckle up: The investigation into the Jan. 6 insurrection is just getting started
By Rafi Schwartz
Stay up to date