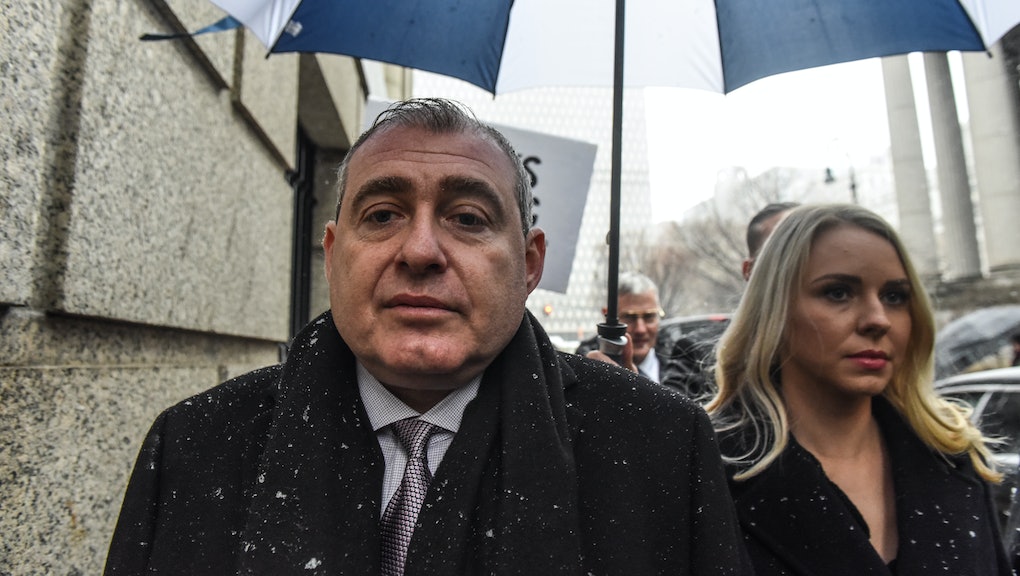 The parade of dunces behind one of the most scandalous actions ever by a sitting American president is at it again. Newly released materials given to House Democrats by Rudy Giuliani affiliate Lev Parnas show how Ukraine’s most powerful prosecutor offered a quid pro quo in which he’d provide Giuliani with information about former Vice President Joe Biden in exchange for a promise to remove the U.S. ambassador to Ukraine, Marie Yovanovitch, from her post. The materials make it very clear that Giuliani, who serves as the President Trump’s personal lawyer and has no official government post, was entertaining the offer. In a letter to Ukrainian President Volodymyr Zelensky, Giuliani requested a meeting in his “capacity as personal counsel to President Trump and with his knowledge and consent.”

In text messages, the Ukrainian prosecutor, Yuri Lutsenko, makes clear to Parnas that he won’t be making any statements about Biden unless the ambassador is removed. “It’s just that if you don’t make a decision about Madam — you are calling into question all my declarations. Including about B,” Lutsenko wrote in March. The Washington Post notes that it’s unclear whether “B” refers to Biden or Burisma, the Ukrainian gas company that once employed Hunter Biden, but reports that Lutsenko wanted Yovanovitch removed because she was pushing for an independent anti-corruption task force that he opposed.

While damning, this new information doesn’t go too far beyond the bounds of what’s already known about matters in Ukraine. Where things enter new, strangely Keystone Cops-esque territory is with the arrival of a man named Robert Hyde. A friend of Parnas, Hyde is currently running a longshot Republican campaign for Congress in Connecticut. But in the spring of last year, he was running something far stranger: a surveillance campaign on Yovanovitch, apparently at Parnas’ direction.

People only one or two degrees of separation away from the president were putting on what feels like a middle school theater company’s adaptation of a lesser Robert Ludlum novel.

In a series of text messages provided by Parnas and released publicly by House Democrats late Tuesday, the two men discuss Yovanovitch in threatening terms. “Can’t believe [Trump] hasn’t fired this bitch. I’ll get right [on] that,” Hyde wrote to Parnas in March 2019. “[She’s] under heavy protection outside Kiev,” he wrote that same day.

Two days later, Hyde sent more texts referring to Yovanovitch. “They are moving her tomorrow," he said. "The guys over [there] asked me what I would like to do and what is in it for them." Hyde continued, "Wake up Yankees man. She's talked to three people. Her phone is off. Computer is off. She's next to the embassy. Not in the embassy. Private security. Been there since Thursday.”

Hyde went on: "They know she's a political puppet. They will let me know when she's on the move." He also quipped, “They are willing to help if we/you would like a price. Guess you can do anything in the Ukraine with money.”

These texts are deeply chilling, as they seem to indicate that the two men were at the very least tailing Yovanovitch. It’s not hard to imagine there were more nefarious intents for this too, as Yovanovitch’s lawyer noted after the messages were made public, calling the conversations “disturbing” and urging authorities to investigate. The messages also indicate the bush league level of the entire Ukraine plot; people only one or two degrees of separation away from the president were putting on what feels like a middle school theater company’s adaptation of a lesser Robert Ludlum novel.

Hyde’s response to the release of the texts doesn’t exactly undercut that characterization. “How low can liddle Adam Bull Schiff go?” he tweeted late Tuesday, referring to House Intelligence Committee Chairman Adam Schiff (D-Calif.). “For them to take some texts my [buddies] and I wrote back to some dweeb we were playing with that we met a few times while we had a few drinks is definitely laughable. Schiff is a desperate turd playing with this Lev guy.” He sent a similar message to NBC News reporter Josh Lederman, saying he’d sent those texts after having “had a few drinks.”

While Hyde appears to be trying to shrug the whole thing off as a joke, Democrats in the House aren’t laughing.

“All of this new evidence confirms what we already know: the president and his associates pressured Ukrainian officials to announce investigations that would benefit the president politically,” wrote the chairs of the House Intelligence, Oversight, Judiciary, and Foreign Affairs committees in a joint statement. “There cannot be a full and fair trial in the Senate without the documents that President Trump is refusing to provide to Congress.”

The fact is, even if Hyde and Parnas were never planning on some kind of assault on a U.S. ambassador — even if this was an embarrassing and inappropriate but ultimately benign display of bitterness toward an American diplomat — the fact that people this close to the president were even sending texts in this vein is a damning indictment of the goonish tendencies of those doing Trump’s bidding. It’s hard to believe we have to say it, but: Drunk texting is not the ironclad defense you think it is.