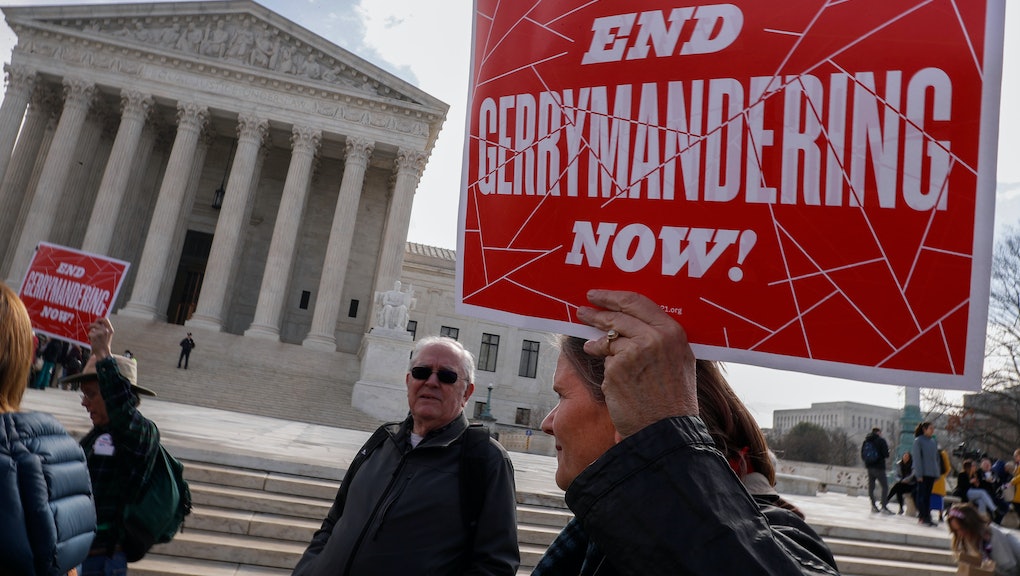 On Monday, a North Carolina court threw out the gerrymandered maps that Republican legislature tried to institute in the state, saying the new districts were illegally biased toward the GOP. In its decision, the court wrote that the plaintiffs would be able to show “beyond a reasonable doubt” that Republicans had created an unconstitutional partisan gerrymander in their own favor — that they'd intentionally, counterintuitively defined the lines of congressional districts to give an advantage to Republicans, by either placing dense concentrations of Democrats in single districts or dividing Democratic blocs into multiple districts, where they could be superseded by larger Republican cohorts.

The ruling blocks the gerrymandered maps from being used in North Carolina’s primary next spring. The judges also said that they would postpone the primary altogether if the case isn’t resolved by March 3, which would delay the state primary until later in 2020. While the decision is technically only a short-term ban on use of the maps, the judges sent clear signals that they will “ultimately be permanently invalidated,” Tom Wolf, counsel for the Brennan Center’s Democracy Program, told Mic. “The court's decision was a major win for the cause of fairer maps in North Carolina.”

A previous federal case involving the state’s districts went all the way to the Supreme Court, where the court’s conservative wing ruled 5-4 that gerrymandering was too inherently political for the court to weigh in on. Before the Supreme Court reached that decision, though, a federal court in North Carolina had already ruled against the maps. Therefore, explains Wolf, “all the facts are already out in public and have already come out in front of the federal court about just how bad North Carolina's map is.”

The plaintiffs in the case are North Carolina residents who are being sponsored by the National Redistricting Foundation, a nonprofit led by President Obama’s former attorney general Eric Holder. Holder’s group is focused on fighting Republican gerrymandering efforts, with an eye towards the next phase of redistricting in 2021.

“For nearly a decade, Republicans have forced the people of North Carolina to vote in districts that were manipulated for their own partisan advantage,” Holder said in an interview with The New York Times. “Now — finally — the era of Republican gerrymandering in the state is coming to an end.”

North Carolina is a swing state, but there's nothing particularly equitable about the state’s representation in the House. Of 13 districts, 10 are controlled by Republicans. “It's one of the most extreme partisan gerrymanders of this decade,” said Wolf. “This is an egregiously abusive, heavily gerrymandered map.”

The map was itself a new version of a previous map that was struck down by a North Carolina state court in 2016, due to racial gerrymandering. In response, the state Republican party redrew the map along political lines — producing nearly the same partisan and racial split, since African-Americans in the state heavily identify as Democrats.

In other words: After being told that a map was unfair, state Republicans redrew a similar map but said that their updated rationale for it was not illegal. In 2016, one of the people who drew the map to give Republicans 10 seats and Democrats 3 said he’d done so “because I do not believe it’s possible to draw a map with 11 Republicans and two Democrats.” Monday's ruling put the nail in the coffin of this tactic.

The Supreme Court has bowed out of solving the problem on the federal level. But in state-by-state cases, courts have ruled against partisan maps, in North Carolina as well as in Pennsylvania. Wolf describes a “groundswell” of support against the aggressive and unfair maps that have been used to disenfranchise voters.

After the next round of redistricting takes place in 2021, Republican legislatures will likely try to continue redistricting their way into large and unfair majorities. Wolf suggests that Democrats’ recent wins at the state level suggest that “courts actually do have the legal tools, knowledge, and wherewithal to deal productively with extreme partisan gerrymandering,” adding that “the examples in states like Pennsylvania and North Carolina suggest that other states may also take a more critical legal view of the maps that come out of the 2021 process.”

Racial disenfranchisement and minority voting rights lie at the core of the redistricting issue. The Hofeller files, recently uncovered documents from the estate of the right-wing redistricting expert Jim Hofeller, lay out a strategy of splitting minorities up or packing them into dense districts in order to minimize the power of their votes. Fighting unfair gerrymanders in court can help mitigate these effects, says Wolf: “It creates situations where parties cannot marginalize racial groups under the pretense that they are only trying to handicap their political opponents.”

In other words, trying simply to hamstring the Democrats won’t be enough cover for suppressing minority votes in the process.

Assuming that the North Carolina court’s decision holds, the state will almost certainly end up with far fairer maps — and more Democratic lawmakers. But the decision will only hold until the end of the decade; this is the last election in which the new maps will be used. Starting in 2021, the battle will begin anew.