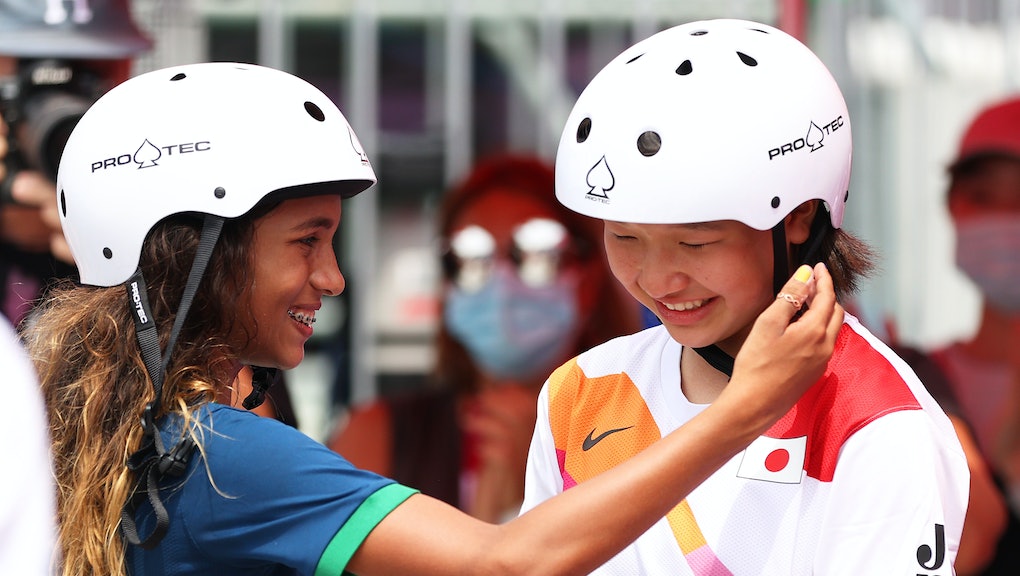 Skateboarding made its Olympics debut in Tokyo over the weekend, and Gen Z dominated the competition. The men's street medalists are in their 20s, but thrillingly, the women who took gold, silver and bronze are all teenagers. Even more impressive? Two of them are only 13.

Japan's Momiji Nishiya, 13, and Brazil's Rayssa Leal, also 13, finished first and second in their sport's debut event. In third place was Funa Nakayama of Japan, 16. The trio edged out a skatepark veteran roughly 20 years their senior, American Alexis Sablone, who's 34 and placed fourth. "For so long the female competition scene — I don’t want to say it was stagnant, but it wasn’t moving as fast," Sablone told The Washington Post. "In the last two years the [rising] level [of competition] has been incredible to see."

A couple of years ago, suddenly competing against 11 and 12-year-olds, Sablone knew she was witnessing the future of the sport. She remembers thinking "there will be prodigies," and "they’re going to show other girls around the world what’s possible." In a sport and lifestyle that's long been dominated by white men, it's thrilling to watch young girls charge the course on their boards and execute daring, challenging moves with precision.

How did Nishiya celebrate expertly riding her board down rails taller than she is? She told the press she was "simply delighted" and asked her mom to take her out for Japanese yakiniku barbecue. Also appearing with her mother at the post-event press junket, Leal told the crowd in Portuguese she wasn't that phased by her monumental accomplishment. "I want to go back to being the little girl I am," she said. "I don’t want to have responsibility. I want to go on being the lively little girl I am for all of Brazil."

When she was just eight years old, a Vine of Leal landing a heelflip while dressed in a fairy outfit went viral, even attracting the attention of skate legend Tony Hawk. The Olympics tweeted a "how it started, how it's going" meme of the young medalist in 2015 and today.

It's hard to predict how many young girls will start skating as a direct result of watching Nishiya and Leal crush the global competition. But the field will likely expand a lot more going into the 2024 Paris Olympics. "It's going to change the whole game,'' U.S. skater Mariah Duran told ESPN. "This is like opening at least one door to, you know, many skaters who are having the conversations with their parents, who want to start skating. I'm not surprised if there's probably already like 500 girls getting a board today."