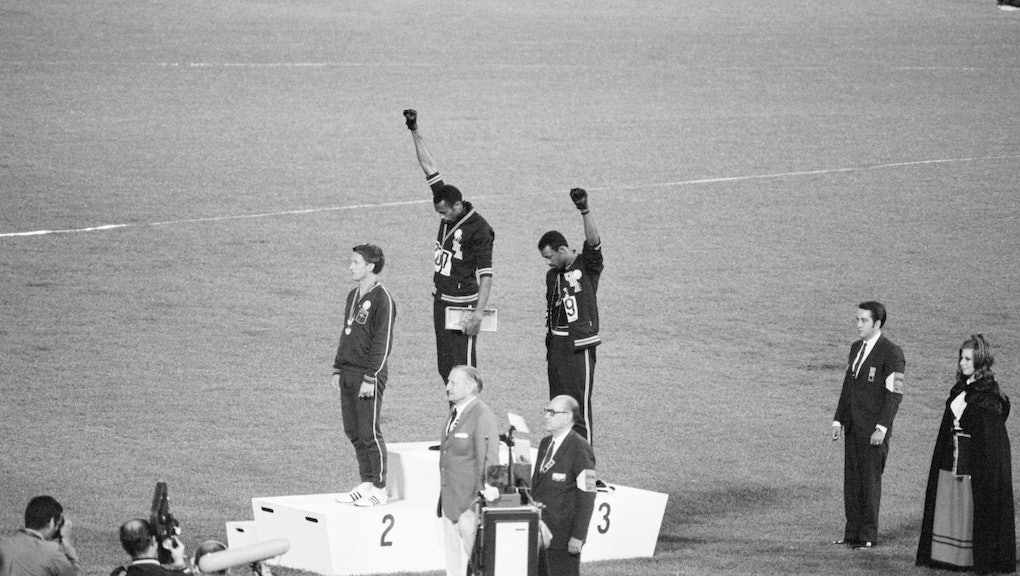 The Olympics will punish athletes who protest racial injustice because we're stuck in the 1960s, apparently

More than 50 years ago, the Olympics expelled two American athletes from the 1968 Games in Mexico City for protesting racial injustice. When John Carlos and his teammate Tommie Smith took the podium for winning third and first-place, respectively, in the men’s 200-meter sprint, they bowed their heads and raised black-gloved fists during the American national anthem. Captured by a Life photographer, the moment became an iconic symbol of the Black power movement and the fight for human rights worldwide. But the backlash to their protest was also intense: both men were kicked off the US team and sent home, where they faced a deluge of hate mail and death threats.

America was in a gnarly place in October 1968, when Carlos and Smith took their stand. Society was deeply divided over the Vietnam War and the civil rights movement. The assassinations of Dr. Martin Luther King, Jr. and Robert F. Kennedy had taken place two months apart that spring. Police had brutally attacked protesters outside the Democratic National Convention in Chicago that August. Many African-American athletes had considered boycotting the 1968 Olympics entirely in protest of racial injustice.

Sadly and incredibly, things aren’t that much different all these decades later. The 2020 Games were postponed to the summer of 2021 and will be seriously scaled back, thanks to the ongoing global pandemic. People around the world have taken to the streets en masse to protest racism and police violence in the last year. And the Olympics still won’t allow athletes to take any sort of stand against injustice.

On Wednesday, the International Olympic Committee (IOC) announced that athletes who raise a fist or take a knee at the Games will be punished. After consulting with its Athletes’ Commission, the IOC decided to uphold its decades-old Rule 50, which forbids any sort of "demonstration or political, religious or racial propaganda" inside stadiums, during ceremonies and on podiums. The method or extent of the punishment is unclear, but the Olympic Charter states that punishment of a bylaw, which prohibits propaganda on clothing, "may result in disqualification of the person or delegation concerned, or withdrawal of the accreditation of the person or delegation concerned, without prejudice to further measures and sanctions which may be pronounced by the IOC Executive Board or Session."

In a small nod to inclusion, the IOC recommended observing a “moment of solidarity against discrimination” during the Opening Ceremony. They also greenlit some branded apparel with “inclusive messaging,” provided the language sticks to words like “peace, respect, solidarity, inclusion and equality” and avoids phrases like Black Lives Matter, which won’t be allowed.

The United States Olympic and Paralympic Committee’s (USOPC) athlete council lobbied the IOC to abolish Rule 50 in the wake of George Floyd’s murder. They asked the Olympics to develop a new policy with athlete assistance that’d protect their freedom of expression.

However, the IOC said it conducted a survey starting in June 2020 of more than 3,500 athletes representing 185 countries and all 41 Olympic sports, and found that “a clear majority of athletes said that it is not appropriate to demonstrate or express their views on the field of play (70% of respondents), at official ceremonies (70% of respondents) or on the podium (67% of respondents).”

“I would not want something to distract from my competition and take away from that. That is how I still feel today,” reasoned Athletes’ Commission chair Kirsty Coventry, who swam for Zimbabwe and earned seven Olympic medals between 2004 and 2008.

By contrast, the USOPC gave athletes the green light to practice freedom of speech during Olympic trials stateside this June. Taking a knee or raising a fist as well as wearing Black Lives Matter apparel will all be allowed. Hate speech or defacing the American flag will not be tolerated, however.

“There is a deep desire for Team USA athletes to speak on these issues and to lead as a positive force in our community," Sarah Hirshland, CEO of the USOPC, said in a statement. She added: "While we support your right to demonstrate peacefully in support of racial and social justice, we can't control the actions others may take in response. I have confidence you'll make the best decision for you, your sport and your fellow competitors.”

The argument that the Olympics should be apolitical is inherently flawed when you consider how the Games have been used to platform international issues in the past. In 1906, an Irish athlete who was upset to be competing for Great Britain (the push for Irish independence was in full-swing) scaled a 20-foot flagpole in an Athens stadium to wave a flag reading “Erin Go Bragh.” The 1936 Olympics in Berlin were infamously a showcase of Nazi propaganda. In 1980, Jimmy Carter announced the US would boycott the Games in Moscow and Canada, West Germany and Japan withdrew in solidarity. The president also threatened to rescind the passports of any athlete who tried to compete for a neutral nation. In retaliation, Russia skipped the 1984 Olympics in Los Angeles. And finally, in 2004, an Iranian judo champion refused to fight an Israeli athlete "to sympathize with the suffering of the people of Palestine."

So yeah, the Olympics' specific aversion to raising a fist or taking a knee is pretty suspect. Will athletes risk getting sidelined in Tokyo to stand up for their beliefs? All eyes will be on the Games this summer.