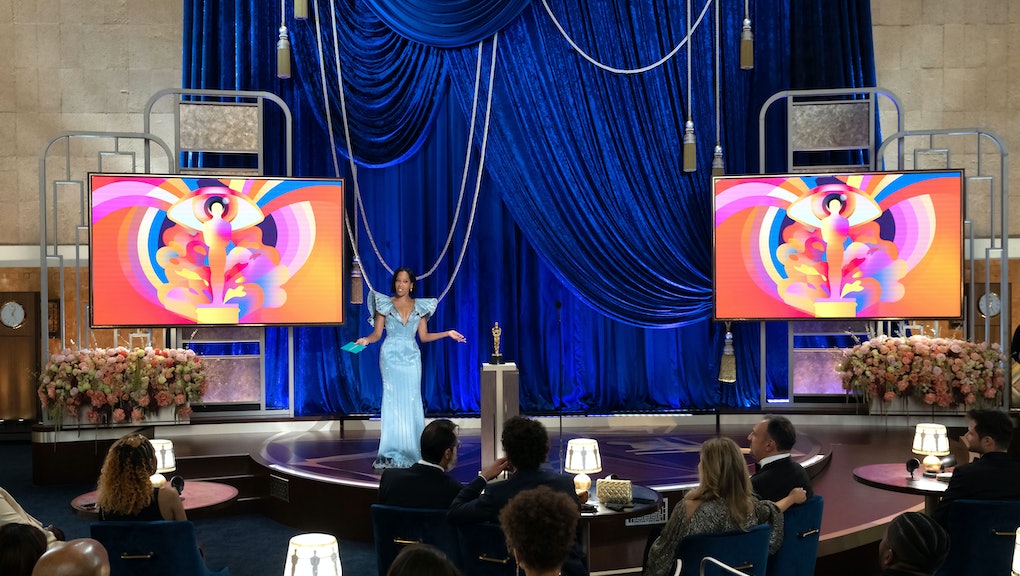 In pursuit of a more intimate, cinematic awards ceremony conducive to social distancing guidelines, the Oscars abandoned its traditional venue, the Dolby Theater, and set up shop inside LA’s main train station. Completed in 1939, Union Station evokes the art deco glitz and glamour of Hollywood’s golden age. After a pandemic that seismically changed the way movies are made and distributed, the Academy Awards seemed to be trying to remind viewers why they fell in love with films in the first place.

In terms of location scouting, booking Union Station for the Oscars was a flex. It honestly looked amazing, with all those banquette tables and lush blue velvet curtains dressing up the grand Ticket Concourse – a hall with 62-foot-high ceilings, 40-foot-high windows and walls adorned with hand-painted art deco tiles. Plus, lots of movies have filmed there before, like The Way We Were, Blade Runner and The Dark Knight Rises, which certainly played into Oscars producer Steven Soderbergh’s “manifesto” to lens the awards fete like a film.

There’s just one big problem: to host a fancy party for Hollywood’s crème de la crème, the Academy Awards majorly inconvenienced real Angelenos who rely on the public transit hub. Event organizers swore up and down that the Oscars wouldn’t cause problems for commuters. “You have to realize — and I mean this — first and foremost, we are a transportation agency,” Ken Pratt, deputy executive officer for real estate at Union Station, told The Wall Street Journal. “We will not disrupt, delay, or cause problems for our passengers.” But it’s evident that the Oscars did not succeed in that respect.

In the lead-up to the telecast, reports emerged that scores of unhoused individuals in the vicinity of Union Station had been forcibly relocated by the city. "They came to us about a week ago saying that we had to move by Friday 6 p.m. because they were trying to clean up for the Oscars and they told us if we didn’t move, they were gonna just demolish our stuff," DJ, a man living in a tent downtown, told FOX 11 Los Angeles. City Council member Kevin De Leon strenuously denied that unhoused residents were forced to relocate, adding that the city offered housing options in the vicinity of Union Station. As DJ put it: "They forced us to go to the Grand Hotel on 3rd and Figueroa and they kicked everybody out of Union Station so it looks better for the image.”

Swaths of Union Station were under construction for weeks as crews readied its interior for cameras and celebrities. Barricades blocked some entrances and security fences restricted passenger pathways. On Saturday, LA resident Sean Meredith tweeted photos of a man using a powered wheelchair who was having trouble navigating the detours. “I’m trying to help this guy get into Union Station. They’re telling him to go the equivalent of 10 blocks to get into the station that’s right in front of him,” Meredith wrote. Similarly, a COVID-19 testing site was relocated to accommodate the Oscars, and patients had to make a half-mile trek through a dingy underpass to reach it.

Writer Samuel Braslow went to Union Station on Sunday to cover the Oscars and instead wound up interviewing an outraged neighbor, Ash (they/them), who said the closures had affected residents in all sorts of negative ways. A station entrance mere steps from their doorstep had been closed for much of April, adding a half-mile walk to their commute, for example. “People who are physically disabled, like me, I just haven’t been able to do anything,” Ash said. “I physically cannot make it over there.” They added that as a Black individual, the increased police and security presence patrolling Union Station felt threatening. Ash made a direct appeal to Hollywood, asking if the party was worth the cost to the community.

The Academy was rather self-congratulatory about how much diversity it managed to highlight this year. Chloe Zhao became the first Asian woman to win Best Director, becoming just the second woman ever to do so in 93 stinking years. Perhaps atoning for ignoring the entire cast of Parasite last year, the Academy fêted Korean movie star Youn Yuh-jung for her compelling supporting role in Minari. The year Crip Camp was favored to win Best Documentary, the Oscars installed a ramp for the very first time.

But goodness, there was such a disparity between the values espoused by Hollywood when the cameras were on versus the human cost behind the scenes. The thing is, it would’ve been so easy to do the show literally anywhere else. Every performance venue in Los Angeles has been empty for the last year. Why didn't the Oscars rent one of them? Or alternatively, you’re telling me Disney couldn’t have built a replica train-station-turned-nightclub on a studio lot somewhere, far away from real people?

The Academy Awards didn’t need to make life harder for unhoused and disabled LA residents, but they did it anyway, commandeering an important public space in pursuit of ratings. Hope it paid off... Oh wait, the Oscars ratings crashed to an all-time low, by a huge margin? Wow. Keep it simple next year, Hollywood. Nobody's watching anyhow.