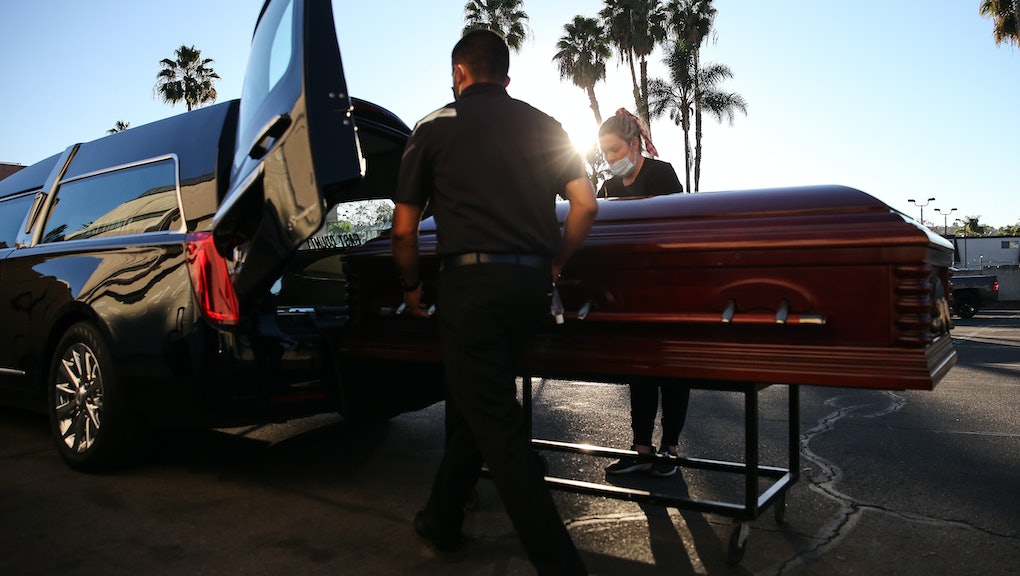 According to statistics released this morning by the National Center for Health Statistics — a part of the CDC that tracks the statistics used to inform public health policy — life expectancy rates dropped by a year in the first half of 2020. Life expectancy, in case you’re not sure, is how long a person can expect to live if mortality rates stay the same throughout their lifetime. According to the data, life expectancy at birth for all Americans went down from 78.8 years in 2019 to 77.8 years from January to June of 2020. That projection means that, based on mortality rates from only the first six months of last year, a baby born in 2020 is expected to live a full year less than a baby born in 2019.

Unfortunately, this news gets worse. The analysis projects that the life expectancy for non-white Americans dropped by far more than a year in the same time period. Life expectancy for non-Hispanic Black people dropped from 74.7 to 72 years and from 81.8 to 79.9 for Hispanic individuals. To be clear, what that means is that while white people can expect to live a year less, Black people can expect to live 3 years less, and Hispanic Americans will live 2 years less.

Black Americans, whose life expectancy has been growing closer to white peoples’ for decades, lost 3 years of life in six months. The gap in life expectancy between white and Black Americans was about 4 years in 2019, and it’s over six years now, PBS reported. The reasons the gap is increasing are sadly unsurprising. “This kind of excess mortality is representing structural inequalities that have existed for a long time that increase both the risk of exposure to virus and the risk of dying from the virus,” Noreen Goldman, a professor of demography and public affairs at Princeton University’s Office of Population Research, told PBS.

Non-white people in the U.S. are more likely to lack access to health care than white people and BIPOC have been diagnosed at higher rates than white people with chronic health conditions that are tied to worse outcomes among those infected with COVID-19, such as asthma and diabetes, Goldman told PBS. BIPOC are also more likely to be essential workers that put them at greater risk for infection, PBS reported.

So not only are BIPOC disproportionately affected by COVID-19 and COVID-releated inequities right now, the health disparity in this country is so great that a BIPOC baby born today can expect to die sooner than a white child more than seventy years from now. And while it may seem like if the expectancy rates can drop so quickly then they can also rise quickly, that’s just not the case. It took 120 years for the life expectancy gap between Black and white Americans to close from 14 years in 1900 to only 4 in 2019, according to PBS.

What will it take to correct this fatal inequality? Well, it’s not “just a matter of giving out a vaccine and being done,” Carlos Del Rio, a professor at Emory University, told PBS. The Biden administration must improve equitable access to health care and expand coronavirus testing, treatment, and vaccines in the communities of color that have been disproportionately destroyed by the pandemic, he said. I hope Biden was taking notes when Marcella Nunez-Smith, chairwoman of the White House’s coronavirus equity task force, said that race and place matter in this fight and that resources will actually be allocated to the people who need them the most.