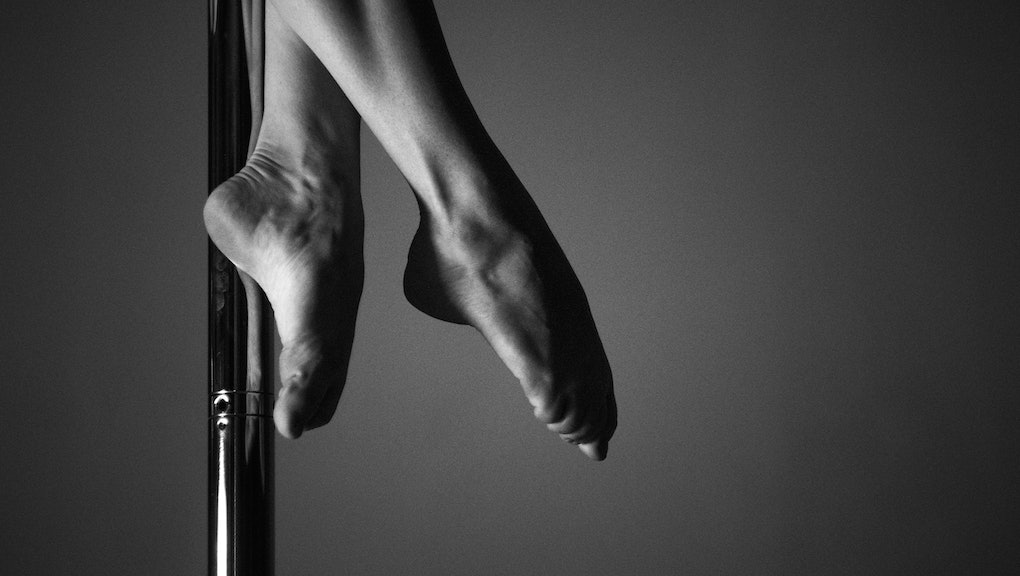 In my several decades in the wellness industry, I have witnessed the rise and fall of many exercise empires that turned out to be cultish regimes. From handsy yoga “gurus” to YouTube fitness scam artists, it seems like no one in the six-pack seeking world is safe. Now, some former enthusiasts of Los Angeles-based strip fitness chain S Factor have accused the pole fitness company of engaging in toxic and traumatizing practices.

Several women have come forward over the past few months to accuse the company of cultish and abusive behavior, according to THR. One former S Factor instructor, Nadia Mitri, claimed that she had a mental breakdown after an S Factor retreat. “I could’ve died or hurt someone else,” Mitri told the outlet. How, exactly, does a “women’s empowerment” retreat land you in a psych ward? Well, it appears that S Factor retreats involve more than stripping your cares away in saunas or crawling across the floor like a showgirl to enhance your self image.

Retreat participants, Mitri claims, were encouraged to have what S Factor founder Sheila Kelley purportedly calls “shatterings,” at the retreats, according to THR Oh, that doesn’t sound sinister at all. Apparently, a “shattering” is comparable to “flooding,” a term psychologists use to describe a kind of exposure therapy in which a patient confronts all their past traumas at once. Except that the retreat that Mitri attended wasn’t led by a mental health expert, it was led by Sheila Kelley, an actress turned “body whisperer.”

Although Kelley did tell the Reporter that a shattering “may be accompanied by an emotional release such as tears, laughter, surprise,” she also insisted that this is just what happens when your body lets go. Mitri also alleged that Kelley preyed on client’s vulnerabilities by referencing their personal traumas, which she collected as part of a pre-retreat questionnaire, and some clients said that they were encouraged to work one-on-one with men who had abused them in the past. “That is not accurate,” Kelley told THR. “I help the women that want to access their full potential of movement. I just help them try and get there.”

Several dozen S Factor clients came forward to tell the outlet that they were troubled by some of the practices of the fitness chain. “It’s a business model that irresponsibly preys on women’s pain,” Laurel Crosby, a former instructor who served as the studio director of the Manhattan location said. Many of S Factor’s celebrity clients, including Kate Hudson and Vivica Fox, declined to comment.

These scary allegations follow the February release of Strip Down, Rise Up, a Netflix documentary about S Factor, which portrays Kelley and the brand as visionary and liberatory. I don’t know who needs to hear this, but co-opting the techniques that marginalized sex workers developed to make a living in order to make rich white women feel good about themselves is not exactly the revolution, especially if said women are being traumatized as a result. I'm not saying this is definitely what happened at S Factor (and we have also reached out the brand for comment on the allegations reported in THR) — but I'm just saying.

S Factor has also come under fire for simultaneously appropriating the cultural tools of BIPOC sex workers and belittling the experiences of non-white people. As former instructor Dwana White described it, the company has had some serious race and class issues right from the start because even though S Factor glorifies stripping, they do not seem to support strippers, who are predominantly POC, according to The Hollywood Reporter.

The wellness industry has effectively, “erased and whitewashed [pole dancing] while also reinforcing the patriarchy and misogynoir: the idea that women — Black women — who strip for money are not deserving of respect, but women who do it for ‘fitness and fun’ are respectable because they don’t need to do sex work to survive,” White told the outlet.

Based on what I've read, Kelley seems contrite about the accusations of cultural appropriation levied against the company, but adamant that their shattering practices are healing rather than traumatizing. “My one goal is to be inclusive and diverse and to elevate the feminine,” Kelley told THR. Yeah, I think I’ve heard that one before.