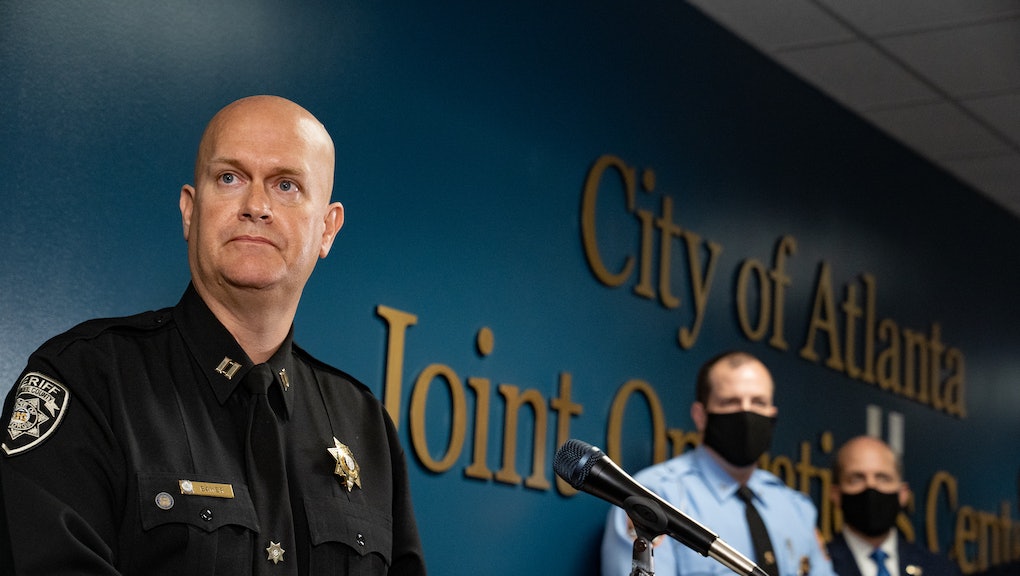 It's hard to imagine a worse response from law enforcement to a racially motivated mass killing than to describe a confessed killer as someone who simply "was pretty much fed up and kind of at the end of his rope" and for whom the day of his killing spree was just "a really bad day for him."

That response, appallingly crass and dismissive as it appears, makes slightly more sense when you consider that the person offering it — in this case, Cherokee County Sheriff’s Office Capt. Jay Baker — is himself apparently inclined to indulge in the same sort of racial biases that evidently played a role in a white 21-year-old's decision to kill eight people, six of whom were Asian women.

In photos posted to a since-deleted Facebook account believed to have been run by Baker, the officer is seen promoting T-shirt spoofs of the Corona beer logo, reading "COVID-19" in the signature font, and underneath that, "Imported virus from CHY-NA" — a possible reference to the unique pronunciation of the country's name used by former President Donald Trump during his many instances of bigoted incitement regarding the coronavirus pandemic.

The pictures were first noticed on Twitter and quickly garnered an intense reaction from those already appalled at Baker's callous dismissal of the gravity of the confessed killer's actions. Baker also gave a bizarre amount of leeway to the gunman's claim that his attacks were motivated not by race, but by a sexual addiction.

"To see this post is both disturbing and outrageous. It speaks to the structural racism that we’re all up against," Chinese for Affirmative Action co-executive director Vincent Pan told the Los Angeles Times. “Coupled with the comments coming out of the news conference, it does not give community members confidence that our experiences and the pain and the suffering that we're feeling are being taken seriously, at least by this particular person."

Democratic Rep. Ted Lieu of California cited Baker's apparent comments as reason for the FBI to conduct its own investigation into the killings, claiming he "would not have confidence in the Cherokee County Sheriff’s Office to conduct a fair investigation that respected the Asian victims."

Baker's quick dismissal of the obvious racial component to the killings also received pushback from Atlanta Mayor Keisha Lance Bottoms (D), who described the killer as "a man who murdered eight people in cold blood. ... It is very difficult to ignore that the Asian community has once again been targeted, and it's happening all over the country."

According to The Daily Beast, the shirts Baker apparently promoted appeared to have been produced by a company founded by a former Cherokee County sheriff's deputy, which has printed T-shirts for the department in the past. When contacted by The Daily Beast, Cherokee County Sheriff Frank Reynolds claimed he was "not aware" of Baker's seeming promotion of the offensive shirts. "I will have to contact him," Reynolds said.

More like this
The DOJ will investigate the Minneapolis Police Department for "systemic policing issues"
By Rafi Schwartz
Nearly half of Asian Americans have experienced at least one racist incident, per a new survey
By Rafi Schwartz
Derek Chauvin has been convicted in the murder of George Floyd
By Kimberly Alters
Stay up to date