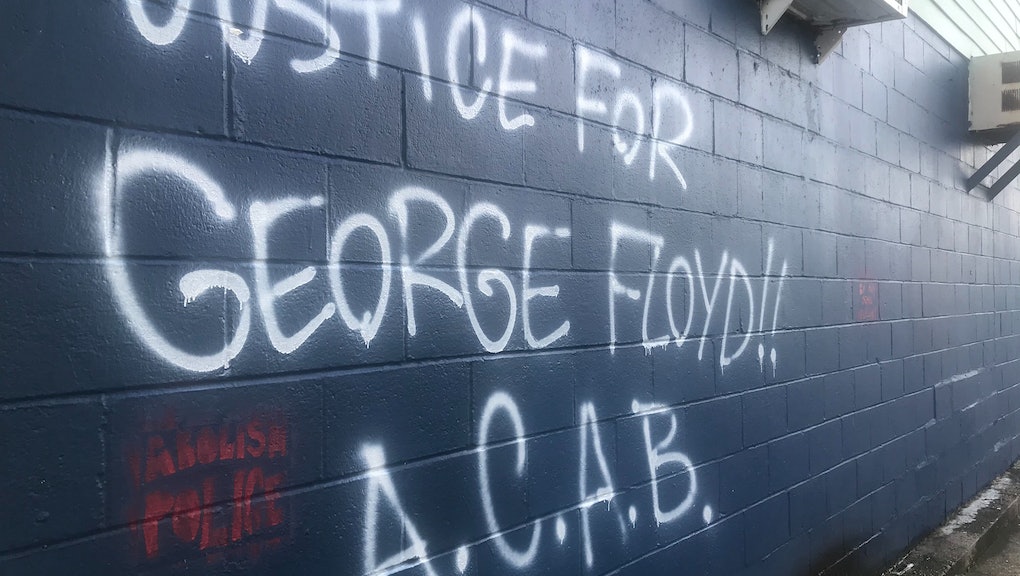 The story behind ACAB, the anti-police tag you're seeing everywhere

You might’ve noticed four cryptic letters spray-painted in your local streets amid the uprisings against police violence: A.C.A.B. The acronym, short for “All Cops are Bastards,” is part of a global movement against the policing system. Here’s what you need to know about it.

A.C.A.B. is cropping up all over the place, not just the U.S. An Instagram search of the A.C.A.B. hashtag turns up more than 1.7 million posts, including photos of the acronym, and the numeric version, 1312, graffitied and tattooed in Chile, Germany, and the Netherlands. An account out of France even features A.C.A.B.-adorned baked goods.

Why “All Cops are Bastards,” though? Well, because they are, if you examine the word "bastard."

“It would be too simple to say all cops are bad, and it’s usually with this misinterpretation that the argument arises that ‘Oh, not all cops are bad,’” explains TikTok user hieronymun. He goes on to clarify that he's deriving “bastard” from the word “bastardized,” defined as “to corrupt or debase.” Cops are corrupted, first, by their positions of power, which they use to inflict violence on others; and secondly, because they've historically enforced corrupt laws that disempower marginalized people.

In other words, the behavior of individual cops is beside the point. Regardless of whether they’re “good” or “bad,” all remain complicit in a system that treats Black lives as less valuable than white lives, Victoria Gagliardo-Silver writes in the Independent. Punishing an officer for killing a Black person won’t fix an inherently racist system in which the silence of “good” cops enables “bad” ones.

The behavior of individual cops is beside the point. Regardless of whether they’re “good” or “bad,” all remain complicit in a system that treats Black lives as less valuable than white lives.

A.C.A.B. is thought to have originated with striking workers England in the 1940s, who shortened “All Coppers are Bastards” to the present-day acronym. A Daily Mirror headline that included A.C.A.B. catapulted it to popular consciousness in 1970. The punk movement then spread it internationally as a slogan for anti-authoritarian resistance efforts, even as far away as Indonesia, where a fan of the soccer team Persija Jakarta died at the hands of police. Notebooks found in his home contained the phrase “All coppers are bastards,” per Vice.

But GQ notes that A.C.A.B. has lent itself to varying interpretations, leading even some racist groups to adopt it to push their hateful beliefs. Kevin L. Clark of Complex points out that the acronym is also problematic in that the protesters who use it, though also critical of police, are usually not Black and may not fully understand the aims of the Black Lives Matter movement. By being more interested in wreaking havoc than in supporting the movement, under Black leadership, they might provoke more violence from police — who’ll likely go after Black protesters first.

A.C.A.B. is far from a neat and tidy slogan. At the very least, its recent resurgence is catalyzing necessary conversations that shift the focus away from “a few bad cops” to a system founded on white supremacy, and how to dismantle it.