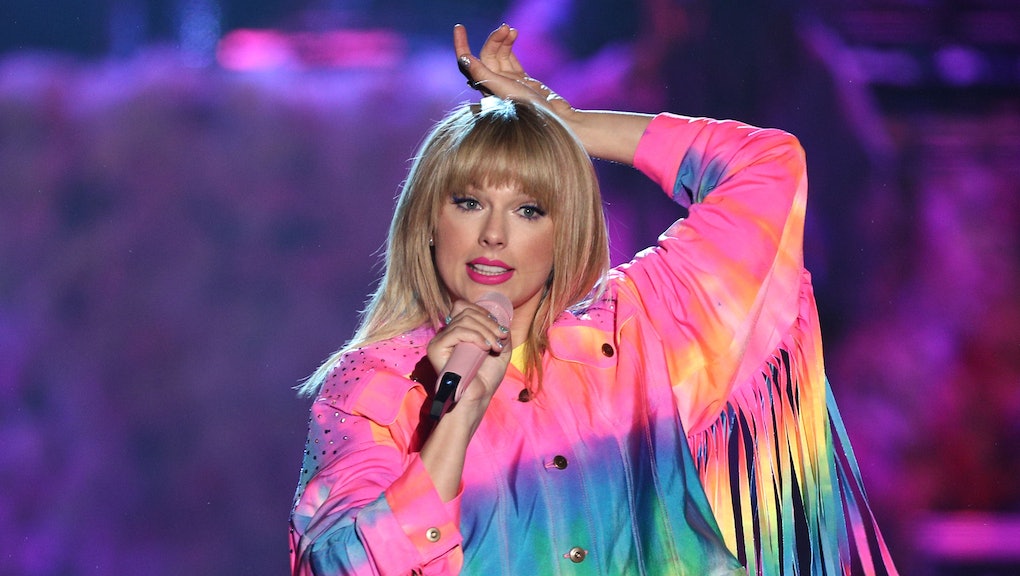 The Taylor Swift and Scooter Braun situation, explained for everyone trying and failing to follow along

Celebrity drama often feels too manufactured these days, prepackaged for maximum engagement and profit and devoid of the messiness and passion of the feuds of yore. But, thanks to the Taylor Swift and Scooter Braun situation, there's a good old-fashioned public debacle underway, and it's getting more intriguing by the minute.

The feud began on Sunday, June 30, when Swift wrote a Tumblr post explaining that music executive Braun had acquired her former record label Big Machine, and thus now — to Swift's heartbreak — owns the rights to her previous albums. In the time since the star's post went public, things have spiraled; by Monday afternoon, the feud included more Tumblr posts, several long Instagram captions from different celebrities, and even the Kardashians.

It's an intense and complicated situation involving the some of the biggest names in music, many of whom are hashing out their issues on public platforms. To make it all simpler, here's a breakdown of everything to know about the Swift/Braun debacle.

In late June, Braun's holding company, Ithaca Ventures, purchased Big Machine Label Group in a deal worth over $300 million. Big Machine owns masters belonging to many artists, most notably Swift. By owning the masters of all her previous music, Braun will be able to profit off her work and control how it is consumed forever.

Why is Swift so upset?

Although the singer's father is a shareholder in Big Machine, she claimed in her note that she only found out about the deal when it was announced to the press on the morning of June 30, and was given no warning by her former record label or Braun himself.

Additionally, according to Swift, she and Braun (who manages major artists like Demi Lovato, Justin Bieber, and Ariana Grande) have a bad history. In the Tumblr post, she accused him of bullying her for years, even coordinating with two of his clients, Justin Bieber and Kanye West, to make fun of her online (she included a screenshot of a 2017 Instagram from Bieber that features him FaceTiming with Braun and known Swift enemy Kanye West, captioned, "What up Taylor Swift"). Swift also mentioned the 2017 incident in which Kim Kardashian revealed videos of Swift on the phone with West granting approval to be referenced on a song that Swift later claimed she didn't approve of, which resulted in the singer being heavily criticized by the public.

"When I left my masters in Scott’s hands, I made peace with the fact that eventually he would sell them. Never in my worst nightmares did I imagine the buyer would be Scooter," Swift wrote. "Any time [Big Machine CEO] Scott Borchetta has heard the words ‘Scooter Braun’ escape my lips, it was when I was either crying or trying not to. He knew what he was doing; they both did."

She added that Braun now owning her music is her "worst case scenario, explaining, "Scooter has stripped me of my life’s work, that I wasn’t given an opportunity to buy. Essentially, my musical legacy is about to lie in the hands of someone who tried to dismantle it."

Swift signed the letter: "Sad and grossed out."

What do Braun and Big Machine have to say?

While Braun has not directly commented on the situation, he has reposted statements of support from other people to his Instagram story. On Twitter, he retweeted a post that read: "Everyone has a story. Context is everything."

Borchetta, however, released a lengthy open letter to Swift that accused her of misrepresenting the information about the sale of her masters to Braun. He claimed that Swift was offered an opportunity to buy her masters, but that she turned it down, writing, "Taylor had every chance in the world to own not just her master recordings, but every video, photograph, everything associated to her career. She chose to leave."

Borchetta also claimed that Swift's father did hear about the Braun deal in advance, and that the CEO even texted Swift himself to let her know before the news went public.

What celebrities are supporting Braun?

Since Swift and Braun are two of the biggest names in the music industry, many famous faces have quickly pledged their allegiance to one side or the other. Bieber responded in defense for his manager just hours after Swift's blog went live, but he began by apologizing for posting that 2017 Instagram, saying, "at the time i thought it was funny but looking back it was distasteful and insensitive."

Yet Bieber then began laying into Swift, accusing her of playing the victim. "What were you trying to accomplish by posting that blog?" he wrote. "Seems to me like it was to get sympathy u also knew that in posting that your fans would go and bully scooter."

"Neither scooter or i have anything negative to say about you we truly want the best for you," the singer continued. "I usually don’t rebuttal things like this but when you try and deface someone i loves character thats crossing a line."

Bieber's not the only famous person to have voiced his support for Braun. Hailey Bieber commented on her husband's post in support of Braun, simply writing, "gentlemen." Braun's wife, Yael Cohen Braun, also posted a long note to Instagram (which country music star Kacey Musgraves "liked") that accused Swift of lying about both the situation and the bullying she claims to have experienced.

"Girl, who are you to talk about bullying? The world has watched you collect and drop friends like wilted flowers," Cohen Braun wrote. She also mentioned the Kardashian incident, writing, "Don't blame [Braun] because Kim caught you in a lie It's embarrassing – I know but adults own up to their mistakes."

Demi Lovato also posted her support of Braun, writing on her Instagram story that he is "a good man." Said the singer, "Please stop 'dragging' people or bullying them. There's enough hate in this world as it is."

According to a Twitter account that claims to aggregate Swift's Spotify activity, the singer blocked Lovato and Musgraves on the app shortly after their social media support for Braun.

So who's on Swift's side?

On Swift's team is her longtime friend Cara Delevingne, who commented on Bieber's Instagram, "I wish you spent less time sticking up for men and more time trying to understand women and respecting their valid reactions. As a married man, you should be lifting women up instead of tearing them down because you are threatened. I am not sure you actually understand what an apology is."

Halsey also posted a note making it clear she's on Swift's side, writing on Twitter, "it turns my gut that no matter how much power or success a woman has in this life, you are susceptible to someone coming along and making you feel powerless out of spite."

"I am standing with her," Halsey concluded. It is the only tweet that Swift has reposted since her original note.

Singer Todrick Hall, a longtime friend and collaborator of Swift's, wrote a tweet saying that as a former client of Braun's, he's "not shocked" by the situation. "He is an evil person who’s only concern is his wealth and feeding his disgusting ego. I believe he is homophobic," Hall claimed. "I know from his own mouth that he is not a Swift fan."

However, Lovato commented on Hall's post that she disagrees with his claim that Braun is homophobic, saying, "Please don’t spread information that isn’t true because I can guarantee you Scooter isn’t. As a member of the LGBTQ+ community myself, he wouldn’t have signed me if he was. No hate just trying to clear that up."

What do fans think?

In addition to the big celebrity names involved in the feud, there are legions of Swift fans who have created their own hashtag, #WeStandWithTaylor. The hashtag is filled with thousand of tweets of support for the pop star, including everything from fan art of Swift to attacks on the celebrities who don't support her claims. Others, however, are calling Swift out for her past instances of self-victimization and standing in support of Braun.

With so many famous folks involved in this saga, this is surely far from the last that we'll hear about the Swift-Braun showdown.