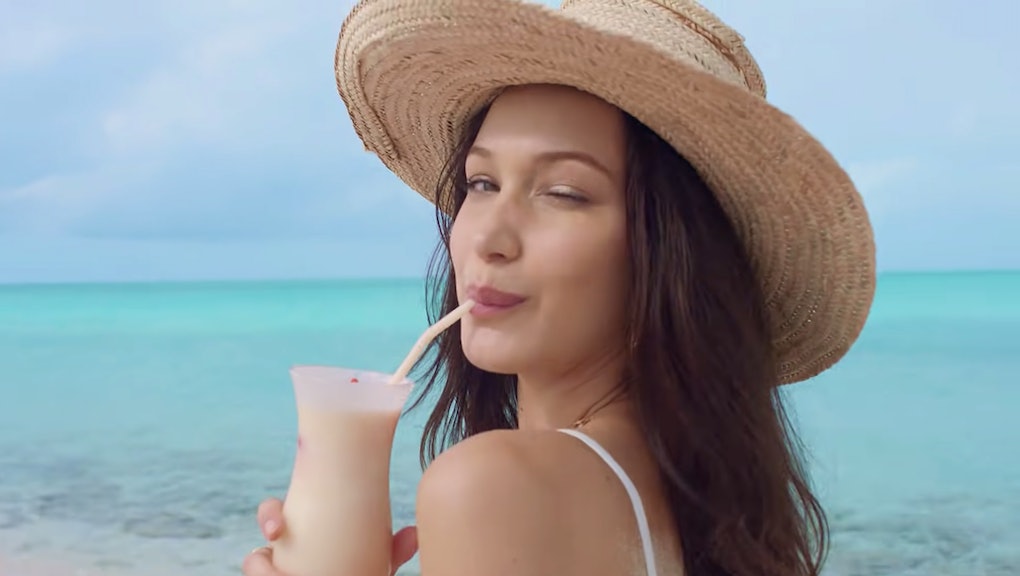 Fyre Festival attendees *did not* get to sip piña coladas with Bella Hadid. (Screengrab via YouTube)

The "trauma" of attending Fyre Fest is worth about $7,000 evidently

People who bought tickets to Fyre Fest shelled out between $1,000 and $12,000 for the privilege of fighting their peers for cheese sandwiches and shelter in a FEMA tent on a dark beach in the Bahamas. Nearly four years after the infamous con, a court has determined those duped people are entitled to monetary recompense. Pending final approval at a May 13 hearing, 277 ticket holders will receive about $7,220 apiece for their troubles, as part of a $2 million settlement.

Now, 2017 feels like eons ago, especially with the hindsight of 2020. So maybe you didn’t follow the implosion of Fyre Fest in real time on Twitter, engaging in collective schadenfreude with the rest of the internet as influencers whined about their nightmare weekend. Perhaps you managed to avoid both of the buzzy documentaries about the scam. Maybe you missed the podcast Fyre Fest mastermind Billy McFarland recorded in prison.

For the folks who’ve perhaps been living on a desert island: four years ago, Fyre Fest organizers shot a glossy video of supermodels frolicking in the Bahamas and used it to market a pricey, exclusive island music festival experience. The ruse worked, and privileged partiers gobbled up the tickets. Long before the event was slated to begin, it was clear Fyre Fest wasn’t going to deliver on any of its promises. Yet it wasn’t cancelled until revelers had already arrived, and by then the damage was done. Photos and video of the scrappy amenities and influencers sleeping on the floors of airports flooded social media.

Anyhow, the U.S. Bankruptcy Court in the Southern District of New York determined that Fyre Fest owes attendees roughly $7,000 each for what it put them through. Organizers had already been answering for the scam in other ways: in 2018, McFarland pled guilty to wire fraud and was sentenced to six years in prison. Kendall Jenner, who was paid $250,000 for a social media post promoting Fyre Fest, agreed to pay a $90,000 settlement for her role in the scam.

The class-action settlement is one of the last pieces of the punishment puzzle. As the lawyer representing the ticket holders, Ben Meiselas, told the New York Times in an email: “Billy went to jail, ticket holders can get some money back, and some very entertaining documentaries were made. Now that’s justice.”

More like this
The creators of MF DOOM tribute comic on his legacy: "DOOM is pop culture"
By William E. Ketchum III
We're obsessed with Lil Yachty's gender neutral nail polish
By Kara Weisenstein
T-Pain just realized he accidentally swerved hundreds of celebs
By Kara Weisenstein
Stay up to date