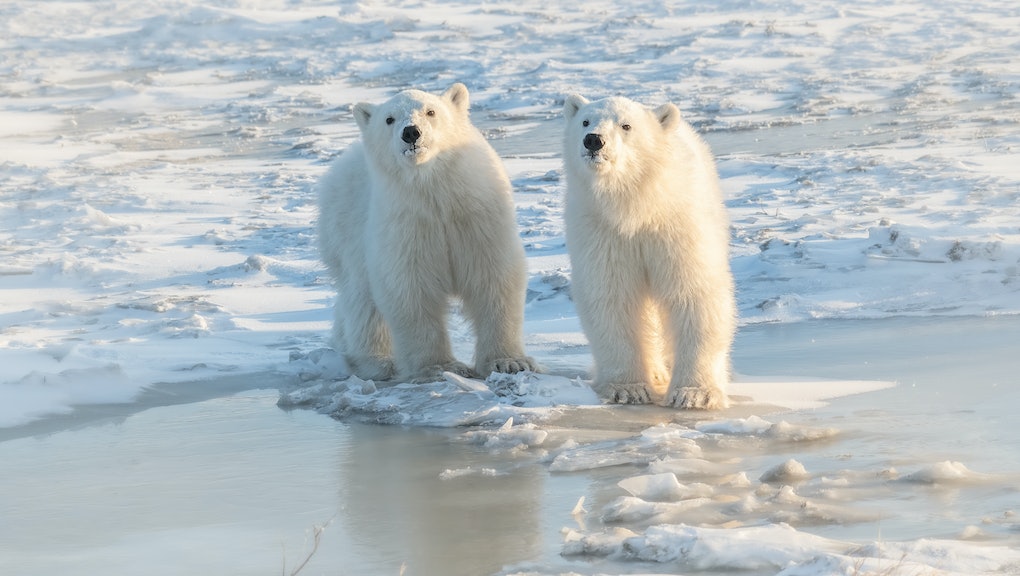 The Trump administration is trying to screw over polar bears now, too

There are approximately 4,000 polar bears in Alaska, according to the U.S. Fish and Wildlife Service, but that population is at risk of decline as climate change continues to shrink their habitat. But a warming planet isn't the only threat polar bears face. New research, conducted by the Interior Department's U.S. Geological Survey agency, found that opening Alaska up for oil and gas drilling would put the already-threatened bears at further risk. But that study is not being made public. According to a report from the Washington Post, US Geological Survey (USGS) Director James Reilly is refusing to release the findings, all while the Trump administration continues to push forward with efforts to drill in Alaska's otherwise untouched arctic lands.

The study, which was obtained by the Post, has been completed and waiting to be published for at least three months. The research, which was conducted by government employees at the Interior Department working under Reilly, found that female polar bears have been giving birth in dens located on land near the southern Beaufort Sea. That is the same area that the Trump administration would like to open for oil exploration, despite the wishes of basically everyone. Researchers also found that the loss of sea ice, which would be exacerbated by oil and gas drilling operations, would further threaten the livelihood of polar bears in the region.

Despite these findings — or more likely because of them — Director Reilly has decided to sit on the study, keeping it from reaching the public. According to the Washington Post, the head of the USGS raised questions about how the study was conducted. In agency memos, Reilly called into question the methodology used for counting polar bear dens. He also reportedly objected to the fact that the study uses data collected by a scientist who subsequently left the government agency to take a position at Polar Bears International, a non-profit polar bear conservation organization.

There's also the fact that the research would directly undermine the actions of Reilly's own agency. Earlier this year, Department of the Interior Secretary David Bernhardt, who is a former oil and gas industry lobbyist, announced that the agency plans to allow companies to lease land within the Arctic National Wildlife Refuge (ANWR), the largest remaining national wildlife refuge in the country. The move by the Interior Department opens up 1.56 million acres of land to be used for gas and oil drilling, mostly along the region's coastal plain, which is home to many of the remaining polar bears.

This isn't the first time that USGS, under Reilly's guidance, has buried or suppressed important research. His office also delayed the publication of a study that showed California could suffer as much as $150 billion in damages because of flooding caused by rising sea levels. When the study was finally made public, it had been scrubbed of any references made to climate change.

Regardless of Reilly's wish to keep research on polar bears under wraps, there is plenty of information already out there without the USGS report. A study published earlier this year warned that faulty equipment used by oil companies could fail to properly identify polar bear dens and end up destroying them. Another study published this summer found that the shrinking availability of ice and dwindling sources of food could result in polar bears starving to extinction by the end of the century. The Trump administration may have the ability to hide a single study to protect its own interests, but it can do little to obscure the very clear trend that climate change is killing polar bears and oil exploration would just make matters worse.

More like this
Heat waves are killing baby birds by forcing them to flee their nests before they can fly
By AJ Dellinger
Amid daily reports of catastrophe, Americans are finally starting to realize climate change is bad
By AJ Dellinger
For the record, this lake in Patagonia is not supposed to be neon pink
By AJ Dellinger
Stay up to date