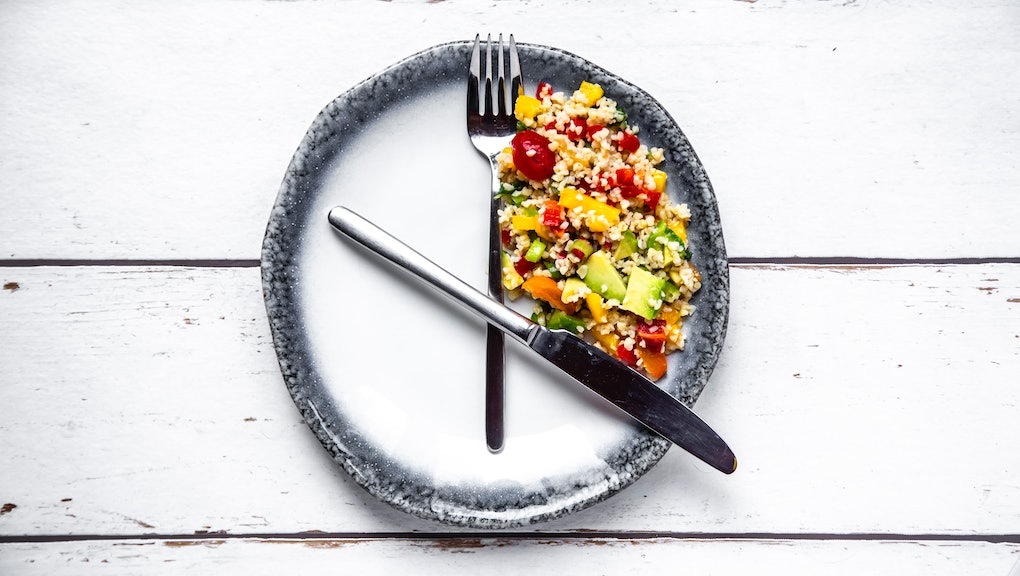 The unexpected issue with intermittent fasting

I’ve been intermittent fasting — eating during only limited hours of the day — for about four years. It didn’t start out as a way to lose weight, which is why most people do it. Intermittent fasting just kind of lines up with the way I live my life — early to bed, early to rise, all that jazz. But I actually did lose weight when I started doing it and I’ve stayed at a healthy, stable weight ever since. But now I’m kind of freaked out because new research shows that the weight lost from intermittent fasting may be muscle instead of fat. That’s definitely not what you want if you value a strong body.

The small study, published yesterday in JAMA Internal Medicine, followed a group of 105 people who were overweight or obese (by medical standards) over the course of three months. They compared the weight loss of people who ate only during eight hours of the day — from noon to 8 pm — with a control group. What researchers found was that the people who did intermittent fasting only lost about a half a pound more than the control group, reported The New York Times.

See, intermittent fasting is all the rage because it’s supposedly a healthy, effective way of dropping pounds quickly and maintaining a desired weight, while still getting to eat what you want. But the potential lack of effectiveness of it, even if it isn’t good news for some people, isn’t really a big deal if you’re at a healthy weight.

The issue lies in what type of weight you’re losing. If the findings ring true in future research, you’re shedding “lean mass,” which includes muscle. The researchers believed this might be the case because fasting diets can lead people to consume less protein, according to the Times. Having healthy muscle mass is crucial. In basic terms, muscles are what move your body and having enough of them protects you from injury.

This study’s findings surprised me, and also the study’s lead author himself. “My bias was that this works and I’m doing it myself, and so I was shocked by the results,” Ethan Weiss, a cardiologist at the University of California told the Times. He also said that even though the study was small, the findings made him start eating breakfast again. “This was a short study, but it was enough that it calls into question whether [intermittent fasting] works — and if it does work, then the magnitude of the benefit is very small,” Weiss said, reported The New York Times.

But don’t worry, you may not have to give up on intermittent fasting entirely. Yes, you do need protein, but other studies have found that people can maintain muscle while fasting by doing resistance training and eating extra protein. Also, not everyone agrees that this is a total takedown of the intermittent fasting trend. “The jury is still out,” Courtney Peterson, a researcher who studies intermittent fasting at the University of Alabama, told the Times. Personally, I’m not changing my eating habits until there’s more peer-reviewed research, but if you hate intermittent fasting anyways, this research is a good enough excuse to opt out.

More like this
We learned collective grief from 9/11. We could really use those coping skills right now
By Melissa Pandika
Delta might be the last COVID nightmare variant we get
By Ian Kumamoto
Studies suggest that Pfizer is no longer the cooler vaccine
By Ian Kumamoto
Stay up to date