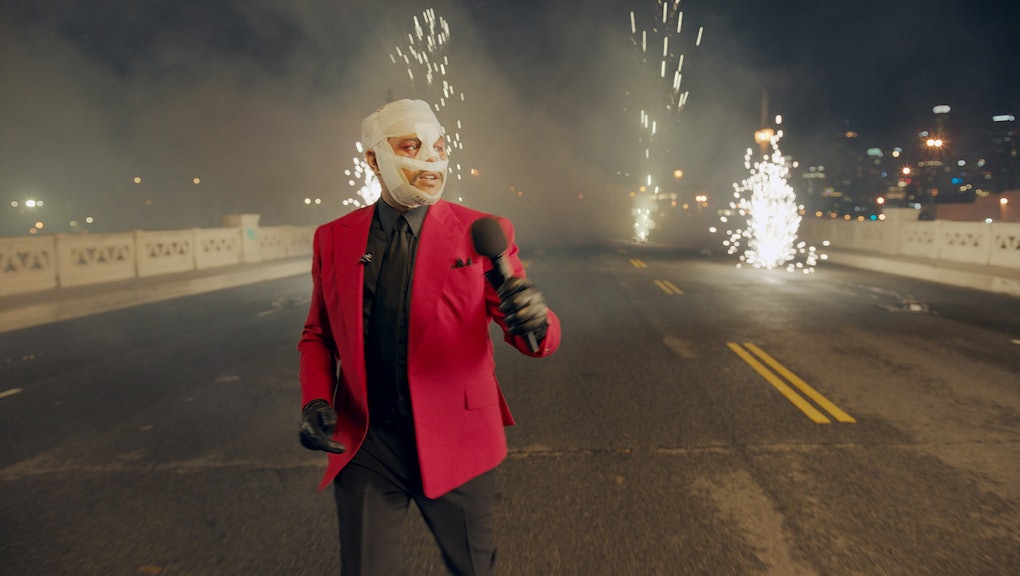 Last year, 102 million viewers tuned in to watch J.Lo and Shakira headline the Super Bowl halftime show. This year’s star, pop singer and body-mod enthusiast the Weeknd, is intent on making sure all those millions of stuck-at-home Americans get a spectacle to remember, because he’s reportedly dropped $7 million of his own money for the 13-minute mid-game concert. That’s on top of the production costs covered by halftime-show sponsor Pepsi, to the tune of $13 million in past years.

The 30-year-old Canadian singer — a.k.a. Abel Tesfaye a.k.a. "Diapers" — told Billboard he hoped to make his halftime show a more “cinematic experience” than the traditional million-dollar-a-minute setup, where a stage on the football field is surrounded by screaming fans, dancers, marching bands, fireworks, and the like. This year the pandemic is forcing most folks to stay home on Super Bowl Sunday — Raymond James Stadium will only be one-third full — meaning far more people are likely to be glued to their televisions and computer screens. Following the trend of virtual concerts, which have become semi-immersive digital experiences, the challenge of the pandemic also offers the Weeknd the chance to experiment. The singer’s manager, Wassim “Sal” Slaiby, told Billboard that his client fronted his own cash to “make this halftime show be what he envisioned.”

For now, the singer is keeping whatever he’s dreamt up for fans under wraps. But Pepsi dropped a promotional teaser for his halftime performance a few weeks back, featuring regular folks (like a grocery worker, parking attendant, and lady blowdrying her hair) rocking out to the singer’s hit tune “Blinding Lights.”

Notably, when the singer rolls up in a convertible, his face appears totally normal — a departure from the beat-up, bandaged, and surgically modified looks he rolled out at the end of 2020 to promote his fourth studio album, After Hours. Suppose Pepsi decided the Weeknd’s botox and fillers schtick was too extreme for a family-friendly gig like the Super Bowl? Guess we’ll have to tune in on February 7 to see what he’s been scheming up.

More like this
How many times must victims relive their trauma in the Larry Nassar case?
By Chloe Stillwell
Colin Kaepernick's new Netflix documentary highlights the man behind the icon
By Keith Nelson Jr.
Lil Nas X’s ‘Montero’ is a vulnerable guidebook on self-acceptance
By Brandon Yu
Stay up to date