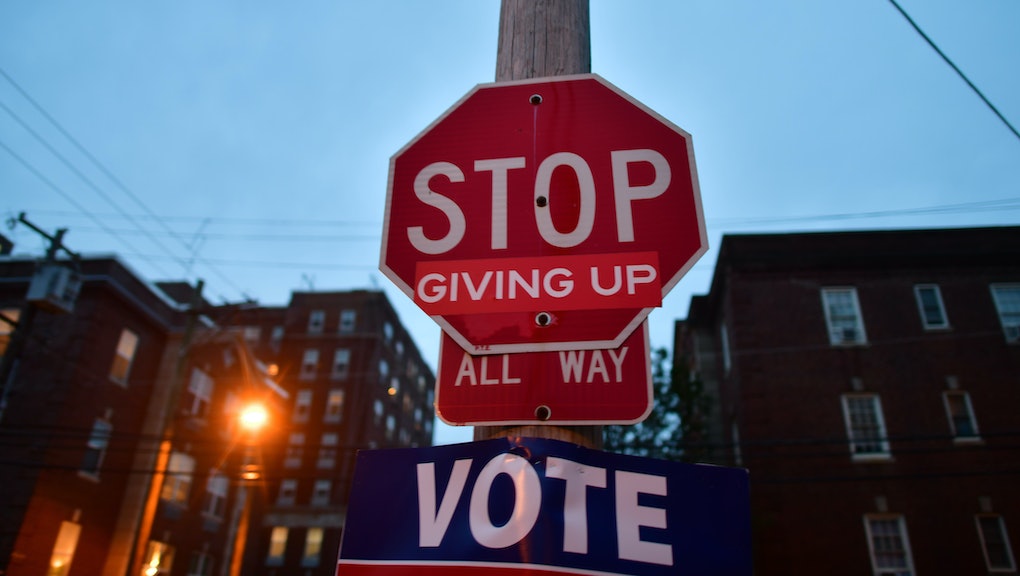 The work will continue after Nov. 3. Here's how you can stay involved

The white nationalist takeover of U.S. politics didn’t begin on Nov. 8, 2016. It didn’t even begin when Trump won the Republican nomination the summer of 2016, nor when he first announced his candidacy in 2015. It began much earlier, when the first European settlers set foot on Indigenous land, and when they kidnapped and enslaved Africans.

We have lived in a hostile nation for more than four hundred years, not four years, but it took this presidency for many of us to notice.

That means that when we take the time to reflect on where we are today, and where we hope to be in the future, we must take the long view. Building a more decent and just democracy is a lifelong project, regardless of the so-called election cycle. No matter today’s outcome, Nov. 4 must continue the path forward, particularly with respect to elections.

No matter who the president is, there will be work left to be done.

Every year is an election year, and every election is a crucial one. Many of us learned this lesson the hard way. When coronavirus swept through our states and cities, filling our ICU beds and tearing through our health care workers’ supply of PPE, those of us in Republican-controlled states had to rely on county commissioners and city council members to enact city-wide mask mandates. (Many of them didn’t.) Our children’s health was in the hands of school board officials, who decided whether to return to in-person school. Local elections matter, and they often have a greater impact on our daily lives than federal elections.

After today, take some time to recover. And then, if you aren’t already, figure out a way to get involved in electoral politics to help salvage what’s left of our democracy — and work toward a more equitable one. No matter who the president is, there will be work left to be done. Here’s some advice on how to get started.

If you don’t feel wedded to a particular political party, focus on non-partisan election-related work

If volunteering for a campaign isn’t for you, stick with nonpartisan work. Many powerhouse social justice organizations – the NAACP, ACLU, and Fair Fight Action — fight for free and fair elections, and they need your help. Join a local chapter to get out and protect the vote. Voter registration is another key component of a healthy democracy. You can help register voters through Rock the Vote, the New Georgia Project, or the League of Women Voters.

Be in the room where it happens

In the 13 years I’ve been voting in Georgia, I’ve been discouraged and frustrated by our election process. A few years ago, I began attending meetings of my local board of elections. When our state decided to dump our outdated direct-recording electronic voting machines and implement a new election system, I wrote to elected officials and signed petitions requesting that they adopt hand-marked paper ballots. And when Georgia Secretary of State Brian Raffensperger went in the opposite direction, instead purchasing a different set of electronic voting machines called ballot-marking devices (where voters vote on touchscreens, print a paper receipt with their selections, and then scan them), I decided I needed to understand how this equipment worked myself. I became a poll worker earlier this summer, and now I help voters cast their votes. If you’re interested in becoming a poll worker, you can apply directly through your county, or through organizations like the ACLU.

If you can’t find an organization that meets your needs, start your own

After a few years volunteering for Democratic campaigns, some friends and I saw a need for a new Democratic organization for South Asian voters. Last summer, we opened the Georgia chapter of They See Blue. If you see a need in your community, start your own group. It doesn’t have to be anything formal; you just need a few like-minded individuals dedicated to the same cause, and you can build it largely online. Take a look at some online resources to help you to assess your community’s needs, determine your focus, and get started.

Vote Smart and Ballotpedia are great tools to learn about candidates. Fair Elections Center has every state’s election laws. Indivisible, the organization that sprung up after the 2016 presidential election, has excellent resources that explain how to organize and get involved in the electoral process.

Your elected officials work for you. Contact them and let them know about any concerns you have. Attend town halls. Speak at your city council and school board meetings. Use your voice at public forums. Send emails and make phone calls.

Regardless of where the chips fall, let Nov. 4 be the day we begin to seize every opportunity to make sure every eligible voter in the U.S. is able to cast their votes — and to ensure that our democracy, at every level of government, is a truly representative one. On Monday in Atlanta, Georgia, President Barack Obama put it best: “That’s what voting is about — not about making things perfect, but making things better. That path, brick by brick ... puts us on track.”