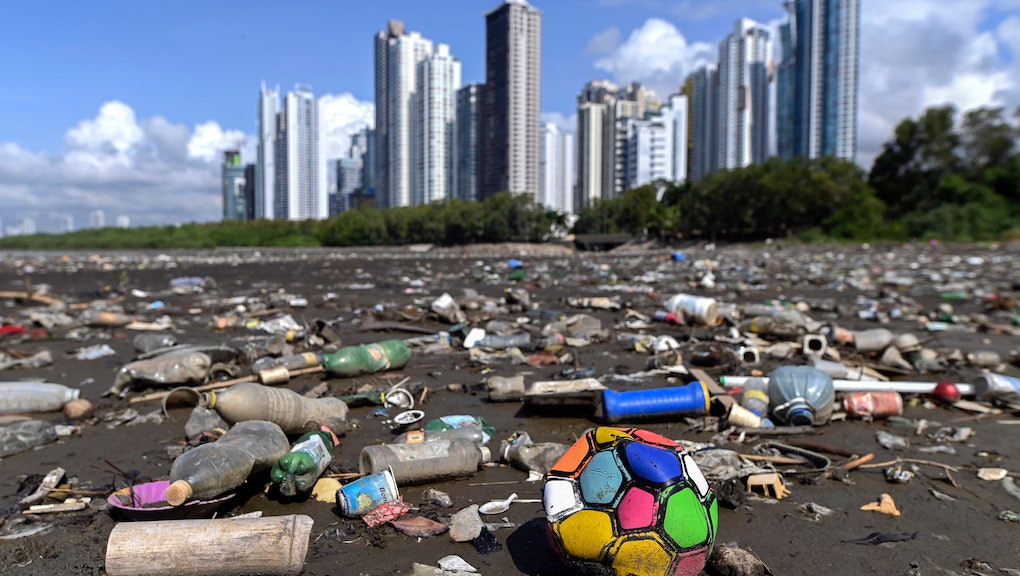 The planet has a plastic waste problem. The vast majority of discarded plastic is not recycled, meaning it ends up in landfills or mucks up the environment as trash. It's not just ugly, it's bad for the planet — and now we know who is largely responsible for it. The Plastic Waste Makers Index, a research project published by Australian non-profit organization The Minderoo Foundation, has tracked down the biggest producers of so-called "throwaway plastic" to find out who is responsible for the piling waste that litters our landscapes. As it turns out, just 20 corporations are responsible for a whopping 55% of the planet's plastic waste — and just 100 companies produce over 90% of all of that trash.

At the top of the Plastic Waste Makers Index are two American companies: oil and gas giant ExxonMobil, and massive chemical producer Dow Chemical Company. According to the study — which was published in partnership with Wood Mackenzie, the London School of Economics, and Stockholm Environment Institute — ExxonMobil contributes nearly 6 million metric tons of plastic waste to the planet. Dow, meanwhile, adds 5.6 million metric tons.

But lest you think this is simply an American problem, don't worry: Profit-hungry corporations across the Earth are involved in trashing it. Sinopec and PetroChina, two of the largest oil producers in China, are in the top 10, ranking third and sixth, respectively. Each company has contributed more than 4 million metric tons of waste. Indorama Ventures, a petrol producer based in India, ranks fourth in the waste-maker index, contributing 4.6 million tons of discarded plastic to the planet, while Saudi Aramco, an oil firm based in Saudi Arabia, rounds out the top five with 4.3 million tons of its own.

Of the top 20 producers, who produce more than half of all plastic waste combined, 11 are based in Asia, four are in Europe, and three are in North America. There is one in Latin America and the last is in the Middle East.

It's hard not to notice a trend among those top-ranking contributors: Many are oil firms. That is because crude oil is used to produce most plastic, and as much as 10% of all oil is used to make plastic products. According to a report from the Yale School of the Environment, Big Oil firms have spent recent years ramping up plastic production as a way to hedge against the inevitable shift away from fossil fuels as a source for gas and energy. It should come as no surprise that five of the companies — Chevron, ExxonMobil, Saudi Aramco, PetroChina, and Abu Dhabi National Oil Company — on the Plastic Waste Makers Index are also among the top 20 companies that have contributed the most carbon emissions over the last half-century.

While these companies are busy producing waste, they aren't the only ones profiting from the destruction of the planet. According to the Plastic Waste Makers Index, just a handful of banks finance this ongoing plastic production. Barclays and HSBC, two U.K.-based financial firms, lead the way, investing more than $3.1 billion each into plastics projects. Three American banks — Bank of America, Citigroup, and JPMorgan Chase — round out the top five of plastic-backers, each loaning out more than $2.5 billion a piece in the last decade.

The sad fact is that plastic production is likely to be quite profitable for the foreseeable future. The International Energy Agency projects that petrochemicals including plastic will drive more than half of all oil demand growth between now and 2050, and the World Economic Forum estimates that plastic production will double in the next 20 years. These oil companies plan to meet the demand, and the banks backing them intend to cash in. The fact that it's polluting the planet, killing wildlife, destroying essential ecosystems, and contributing to dangerous health conditions including cancer doesn't seem to be much of a concern.

More like this
Another reason to legalize weed: It'll be better for the environment
By AJ Dellinger
Somehow the Swiss Alps are still growing, shocking scientists
By Tebany Yune
Eco-friendly houseplants: Here's how to ensure your indoor plants are good for the planet
By AJ Dellinger
Stay up to date