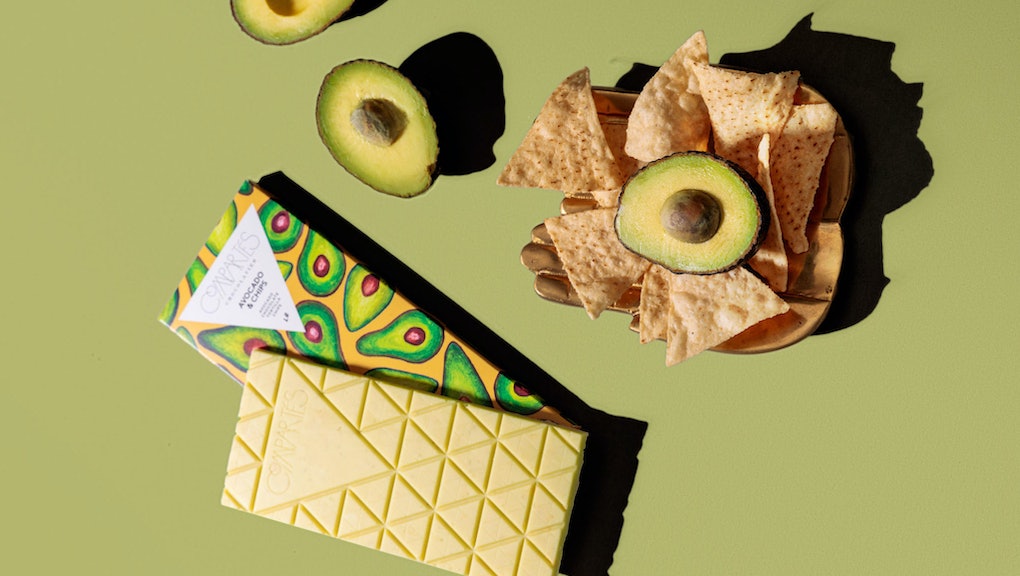 When I was little, I hated my food to touch. I would meticulously separate any food items that tried to mingle on my plate. Rice had its own quadrant, green beans had their own, and chicken minded its business in another, with a clear dividing line between all of them. My mother, on the other hand, was a hedonistic mixer. She insisted that food tasted better all mushed around together, and that the flavors and textures played off of each other. I ignored that seemingly egregious theory for much of my life, so you can imagine my hesitation when I was given the opportunity to try a chocolate bar with avocado and tortilla chips in it. Though those are three of my favorite foods, I was skeptical.

Additionally, the "putting avocado in (or on) everything" trend that permeated the food industry years ago has felt gimmicky to me — a lazy way to imply a familiarity with Latinx culture without doing any real leg work. Also, avocado doesn't need to be the identifying marker of the millennial generation. It's bad enough that Gen X columnists working at The Economist think that our predilections for nine-dollar toast are the reason we don't own homes. (The real reason is an exploitative economy and the impending threat of climate change, aye!) With all that in mind, I was about to swear this bar right off.

I gave it a chance, though, since it was courteously shared with me to try for free. Compartes — which means "you share," in Spanish — is a fancy chocolate company that specializes in combining ingredients like pistachios, s'mores, churros and horchata, donuts and coffee milk with their chocolate. As a career food-separator, I’d ordinarily shade these flavors shamelessly pushing up on each other. But it seems that the magical nymphs that make these are somehow able to retain the identifiable integrity of a straight-up Willy Wonka-style chocolate bar.

So I tried the bar, which is essentially white chocolate with avocado, embedded with small, hidden pieces of tortilla chips, retailing online at about $10. What should have been an abomination to my childhood sensibilities was actually a delight. The lightly salted tortilla chips added a pleasing amount of crunch, but they weren't overwhelming. The avocado made the white chocolate less sickly sweet than I usually find it. And so I ate the entire bar in 20 minutes. I did not follow the directive of the chocolate company's name — my roommates tasted not a single sliver of the chocolate.

A part of myself rationalized that because a vegetable and a salty carb were involved, the chocolate bar I had for breakfast was actually a complete meal, and that meant that I didn't have to repent for eating nearly a forearm length of candy before 10 a.m. But let’s not oversell this thing. Breakfast, it is not. So after I finished inhaling it, I shoved some leafy greens down my gullet, saluted my adventurous endeavor, and called it a morning.