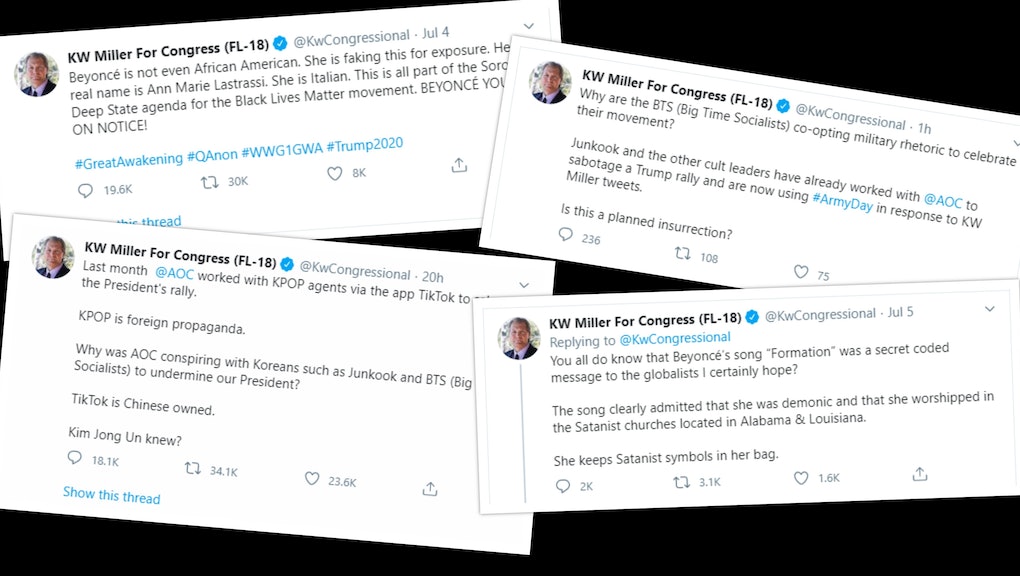 While you were minding your business over the Fourth of July weekend, a Florida congressional candidate named KW Miller was exercising his right to free and unencumbered speech by, uh, alleging that Beyoncé’s is actually an Italian woman named Ann Marie Lastrassi. The independent but far-right and Qanon-adjacent candidate went on a posting bender, alleging everything from Beyoncé’s penchant for Satanic imagery to her purported connections to George Soros and the Deep State. That’s just the half of it!

After claiming that Beyoncé is “not even African American,” faking it for exposure and to further the “Soros Deep State agenda for the Black Lives Matter movement,” he runs down her hidden globalist and Satanic messages in Lemonade songs. Becky with the good hair? Why that’s Becky Hogge of the Soros-founded Open Society Foundations. “Black Bill Gates in the making?” Awfully suspicious that she sang this...four years before he would help fund a COVID-19 vaccine. Can’t you see what’s happening here?? Miller would flag Patti LaBelle as “another Illuminati globalist puppet” later in the thread.

It’s hard to pin down where exactly he’s getting this stuff, besides the latent racist and anti-Semitic leanings, but the Ann Marie Lastrassi conspiracy seemed to sprout up in late June. One Twitter user pointed out that an Instagram commenter under the username jjwebb launched into the Lastrassi conspiracy in the comments of a Beyoncé fan page. The next day, another Twitter user dove into a hilarious joke thread posing that Beyoncé is in fact Italian, and that Ariana Grande’s her long lost biological daughter, among other things.

Miller, running against incumbent Republican Brian Mast in Florida’s 18th Congressional district, has been posting up a storm throughout the week. He went viral again on Tuesday evening, after launching into another grand pop music conspiracy. This time, he shifted his focus to the claim that K-pop stans sunk President Trump’s Tulsa rally by sending thousands of dummy RSVPs. Miller, who was incensed that Rep. Alexandria Ocasio-Cortez tweeted her support of the teens, tried to lump her into a global election conspiracy. “Why was AOC conspiring with Koreans such as Junkook and BTS (Big Time Socialists) to undermine our President,” he wrote.

Big Time Socialists is objectively great and likely helped this one take off, which seems to be Miller’s only mission at this point. The TC Palm reports that he hasn’t reported any donations to the Federal Election Commission, but a GoFundMe page for his campaign has raised just $795 out of a $500,000 goal since June. In an interview with the Palm, Miller denied endorsing Qanon but ceded that they “follow” him. He also all but admitted that his conspiracy threads are deliberately spreading misinformation as “bait” for the “lefts and globalists” to engage with. “Sometimes I have to throw some meat into the lion's den to get everybody’s attention,” Miller said. “And that’s what we did.”

Maybe it’s just that he’s back in the news, but it’s hard to imagine this as anything but a Sacha Baron Cohen bit. No matter the fate of his longshot and likely under-funded campaign, Miller at the very least gave us the Italian Beyoncé memes. I-a singa the halo!

More like this
"She's gonna disappear": A GOP congressional candidate threatened to sic Russian hitmen on his opponent
By Rafi Schwartz
SCOTUS just dealt a unanimous blow to the NCAA over student-athlete compensation
By Rafi Schwartz
Kenya Barris and Issa Rae are changing the music industry with their new record labels
By Keith Nelson Jr.
Stay up to date