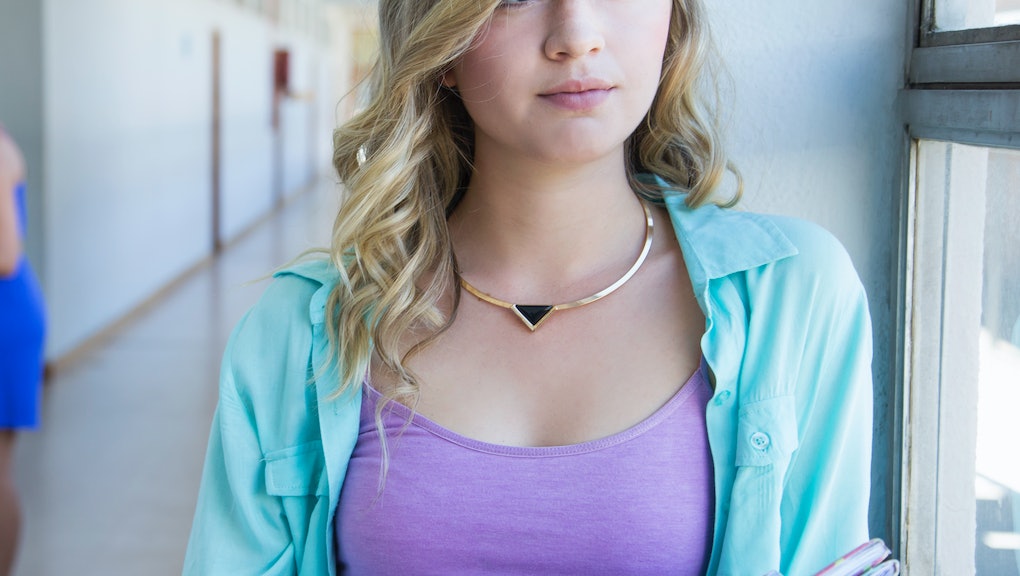 Teenage girls have simultaneously the least respected and most worshipped bodies in American society. For decades — if not longer — we have upheld the pubescent female-assigned form as both the epitome of idealized beauty and the central target of body shaming and subsequent social policing. The recent photoshop censorship of a Florida school’s yearbook photos perfectly encapsulates this contradiction.

Last week, Bartram Trail High school in St. John’s County, Florida released their 2020-2021 yearbooks. No matter how long ago high school was for you, you probably remember what a bfd yearbook day was, especially your senior year. You wait all year to see how Teen You will be remembered by your peers for the rest of your life. But when students at Bartram Trail cracked open their long-awaited momentos, what they found was that over 60 of the photos had been altered, the New York Times reported. Angsty teen me is already quaking with fury.

The school did not make subtle or welcome changes to student photos — like airbrushing acne or digitally smoothing their hair. Instead, it put awkward black bars over people’s chests. To be clear, by people, I mean female-assigned people and by chests, I mean breasts. Yes, what I am saying is that here in 21st Century America, this Florida school photoshopped the breasts off people.

The school defended itself by citing the dress code. The school website states that yearbook photos “must be consistent with the St. Johns County School District Student Code of Conduct or may be digitally adjusted.” The code mentioned however, says nothing about how much chest is too much, even though it’s very specific that skirts must be longer than 4 inches above the knee and that the “whole shoulder” must be covered by girls’ clothing.

None of the original photos released show anyone wearing scandalously low cut tops. Also, we are not talking about a school sensitively photoshopping teens who were pushing the limits of acceptability in order to protect them from their poor fashion choices. These are teens who wore your average fast fashion scoop neck poly blend tee to their photo sessions and found any hint of breast covered by the same ubiquitous black censorship bar that we use to cover actual dicks in media.

This all begs the question as to whether what the teens were wearing was the problem. From my safely braless seat on the sidelines, it seems like Bartram Trail is sending the message that having breasts is a violation of the school’s code of conduct. Do I even need to point out how inherently problematic this is? Not only does it censor people’s naturally developing bodies, it also tells them that there is something wrong with those bodies. This isn’t even low key body shaming, it’s straight up bullying.

Not only is it confusing for teenage girls to get the message that their bodies are distractingly tempting and must be contained, it’s actively dangerous. Recent research has found links between body shaming during adolescence and teen substance misuse. Not only that, but female assigned people who were body shamed in their teen years have a higher prevalence of adult depression. Unfortunately, this is not a unique situation, as 94% of teen girls report experiencing body-shaming. It’s just not usually so obviously codified.

In case you were wondering, it only seems to be female students at Bartram Trail who are punished for dress code violations.

This is not the first time that Bartram Trail has been accused of bullying its female students. In March, female students at the school reported that they had been taken out of classes by an administrator, asked to remove their outer wear, and then given violations if what they were wearing underneath didn’t conform to school policy, according to the Times. One student responded by contacting local news and starting an online petition for the school to reassess its policy, and male students at the school expressed solidarity by coming to school in short skirts.

In case you were wondering, it only seems to be female students at Bartram Trail who are punished for dress code. Male students were shown wearing skimpy swimwear in the yearbook, even though that is clearly a violation of the school’s policy, reported NPR. If this all seems regressive to you, well, you’re in good company. A meme about the school is currently circulating that shows the numerous dress code violations that actors on the 1970s Brady Bunch would be given in present day Florida. While it might be tempting to write this off as an “Oh, Marsha,” moment, honestly, this incident seems like more evidence that we just haven’t progressed much socially in the past 50 years.