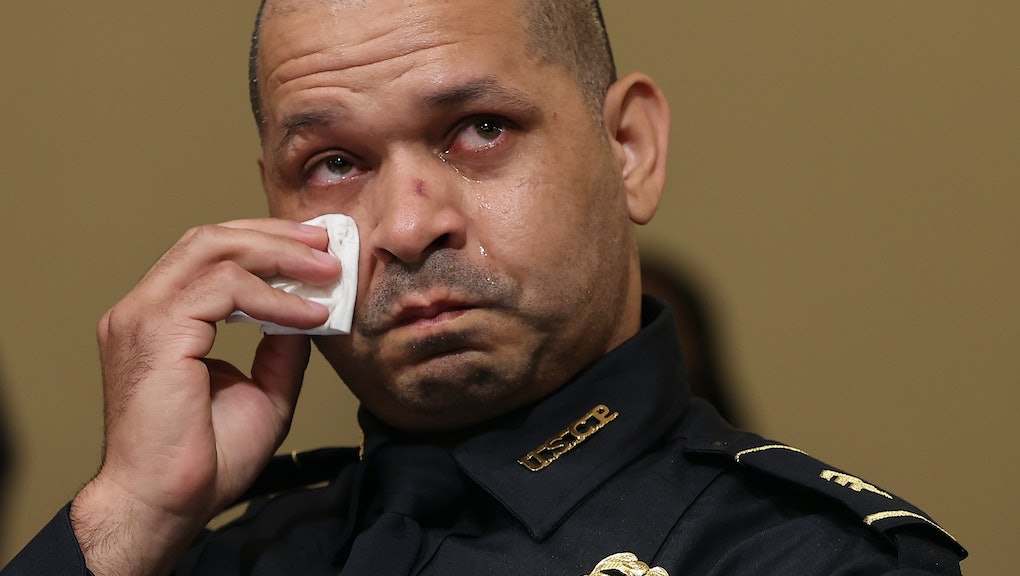 "This is how I'm gonna die": Capitol cops' testimonies highlighted the cowardice of the GOP

When former president Donald Trump lost the 2020 election, he made it clear that he and his supporters would not bow out with grace. Following Trump's disturbing "Stop the Steal" rally speech, hundreds of his supporters stormed the U.S. Capitol Hill on Jan. 6. While some predicted a coup-like event would happen before that day, witnessing it actually unfold shocked and disturbed many. Now, as investigations into the event continue, Capitol police officers are bringing the cruelty of the insurrectionists — and the Republicans who refuse to hold them accountable — into sharp focus.

On Tuesday, the House of Representatives' select committee to investigate the attack held its first hearing. In her opening remarks, Wyoming Rep. Liz Cheney, one of only two Republicans on the committee, touched on the partisan drama that led to its existence.

"Every one of us here on the dais voted for and would have preferred that these matters be investigated by an independent non-partisan commission, composed of five prominent Americans selected by each party, and modeled on the 9/11 Commission," she said. "Although such a commission was opposed by my own leadership in the House, it overwhelmingly passed with the support of 35 Republican members, it was defeated by Republicans in the Senate. And that leaves us where we are today."

The hearing focused on testimony from four police officers who were present for the insurrection. Before they spoke, Mississippi Rep. Bennie Thompson, the committee's chairman, played disturbing video footage of the Jan. 6 attack, telling the officers that while it may be difficult for them to revisit that day, "history will remember your names and your actions."

The testimonies the officers then shared were all, in their own ways, upsetting. In May, D.C. Metropolitan Police Officer Michael Fanone told CBS News, "I was tortured. I was beaten. I was, you know, struck with a taser numerous times at the base of my skull. And I posed no threat." On Tuesday, Fanone went into further detail, testifying that he ended up unconscious because of the attack and that he had a mild heart attack and a brain injury.

Fanone said that, while being beaten, he feared for his life and tried pleading with the crowd by telling them, "I have kids." In response, he said, they chanted, "Kill him with his own gun," which the officer said he still hears in his head today.

Officer Harry Dunn detailed racist attacks he experienced, including having racial slurs hurled his way. When people said they were storming the Capitol to “stop the steal” and that “nobody voted for Biden,” Dunn told the crowd he had.

In response, Dunn testified, "One woman in a pink MAGA shirt yelled ‘You hear that guys? This n*gger voted for Joe Biden’. Then the crowd, perhaps around 20 people, joined in screaming ‘Boo! F*cking n*gger!’ No one had ever, ever called me a n*gger while wearing the uniform of a Capitol officer."

Dunn told the committee that after the events, other Black officers shared the racial abuse they also encountered that day. One colleague said people yelled, "Put your gun down, and we'll show you what kind of n***** you really are!"

U.S. Capitol Police Sergeant Aquilino Gonell also testified, sharing his own encounter with racist and xenophobic insurrectionists. "Apparently even through my mask they saw my skin color and said, 'You're not even an American,’" Gonell, who immigrated from the Dominican Republican as a child, told the committee members.

Gonnell said he was also beaten — with a flagpole — and that he required surgery on his right foot because of the Capitol attacks, and he will need surgery on his left shoulder. "What we were subjected to that day was like something from a medieval battle," he said. "We fought hand to hand ... the rioters that attempted to reach the Capitol were shouting, 'Trump sent us' ... I recall thinking to myself, 'This is how I'm gonna die'."

Federal officials have charged hundreds of people for offenses stemming from the Capitol insurrection and, earlier this month, Florida man Paul Allard Hodgkins received the first felony sentence. But the investigation is far from over — and it may drag out as partisan drama continues to rear its ugly head, to the frustration of officers who are still dealing with the effects of that day.

"Telling the truth shouldn't be hard. Fighting on Jan. 6 — that was hard. Showing up Jan. 7 — that was hard," Dunn said. "Liz Cheney and Adam Kinzinger are being lauded as courageous heroes, and while I agree with that notion, why? Because they told the truth? Why is telling the truth hard? I guess in this America, it is."

Officer Daniel Hodges, who was crushed against a Capitol doorway in a harrowing moment caught on video, testified that he saw multiple "terrorists" carrying thin blue line flags — meant to represent support for police — while ignoring and assaulting officers.

Hodges' emotional testimony, like the others, highlighted the unbelievable irony of Republicans in and out of Congress who preach support for law enforcement when it's convenient, but show complete disregard for officers' lives when those officers stand in the way of their agenda. During his testimony, Fanone drove that point home, stating that elected officials who continue to deny the reality of Jan. 6 are betraying their oaths of office. Some of those officials, namely Senator Mitch McConnell and Rep. Kevin McCarthy, only helped make Fanone's point when they later told reporters they were just too darn busy to watch the hearing.

"What makes the struggle harder and more painful is to know so many of my fellow citizens, including so many of the people I put my life at risk to defend, are downplaying or outright denying what happened," Fanone said during his testimony. "I feel like I went to hell and back to protect them and the people in this room, but too many are now telling me that hell doesn't exist — or that hell actually wasn't that bad. The indifference shown to my colleagues is disgraceful."