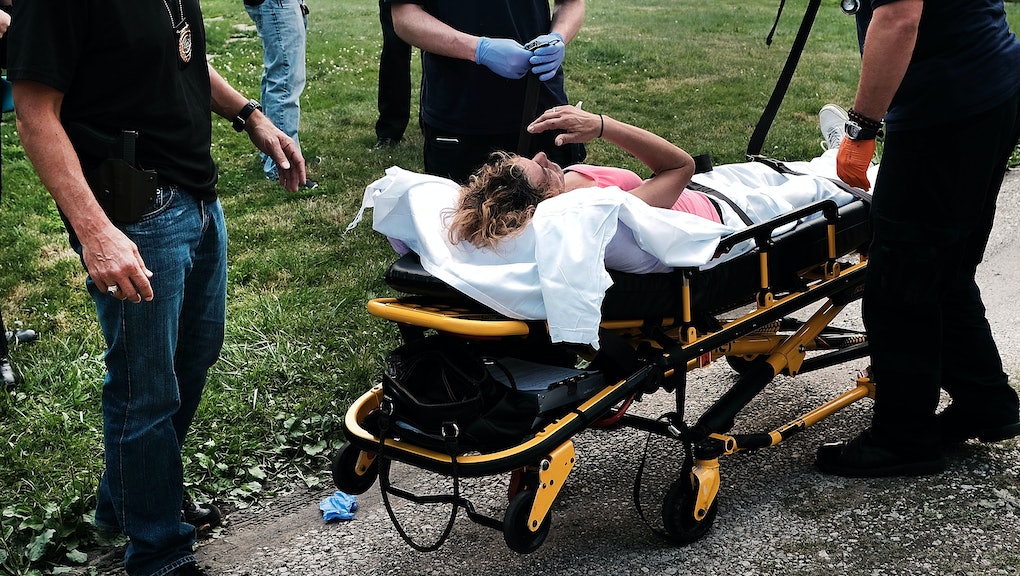 Early in the pandemic, many of the initiatives and tools geared toward keeping drug users safer — like community-run programs that offer needle exchange and drug safety test strips — were forced to limit operations. Harm reduction, in case you're new to the concept, is the idea that we can help people who use drugs not by insisting that they abstain, but by helping them use in safer ways. Given the lack of resources combined with the intense stress of the pandemic, it’s no wonder that there's been an alarming uptick in overdose deaths. But maybe the federal government is finally starting to align with medical and addiction experts, because the Biden administration recently announced its plan to fund harm reduction programs.

The American Rescue Act, which was passed by Congress in March, allocates $30 million specifically to fund harm reduction programs, the New York Times reported. Honestly, that’s not much when viewed in the context of a $1.9 trillion COVID-19 relief plan — $4 billion of which is earmarked for substance use and mental health — but it is the first time that the federal government has funded harm reduction at all. Generally, substance programs have condemned or stigmatized drug use, instead of trying to keep individuals who use drugs alive and healthy.

This federal money will go towards funding programs that help keep people who use drugs safe, instead of punishing them. “It’s an enormous signal, recognizing that not everybody who uses drugs is ready for treatment,” Daliah Heller, director of drug use initiatives at Vital Strategies, a global public health organization, told the Times. “Harm reduction programs say, ‘OK, you’re using drugs. How can we help you stay safe and healthy and alive first and foremost?’”

This $30 million may help shift the public narrative away from policing and towards public health, then, even if it doesn’t get clean needles to everyone who needs them. Some conservatives argue against harm reduction policies like needle exchange, claiming they somehow encourage people to use drugs. “I know people who are alcoholics, and I don’t buy them a bottle of whiskey,” Mike Jones, a commissioner in Indiana, told the Times. I’m no public health expert, but I’m gonna go ahead and say that no one is dying of a syringe overdose, Mike.

Most research supports the efficacy of clean needle programs in curbing the spread of infectious diseases like H.I.V. and Hepatitis C., and many experts have been publicly calling for a national needle exchange program for a while. This funding probably won’t go that far, but it may help some harm reduction programs — which suffered greatly during the pandemic — stay open.

This harm reduction money is great, then, but it also seems important to note that this new effort to help drug users has a lot to do with cultural perceptions about who uses drugs. In the past, the dominant view was that drugs were a “Black problem,” but the whiteness of the opioid crisis has meant that many white Americans were people affected by drugs and pushed for policy. In fact, most of the money that has gone towards helping folks dealing with substance use issues during the opioid crisis has gone to white people, while Black Americans continue to suffer.

In the past, money from the government bookmarked to deal with drugs and drug use largely went towards fueling the war on drugs, which means that we spent a lot of money to enforce drug policies. In the past 50 years, the U.S. has spent over a trillion dollars fighting this racist imaginary war, with very little to show for it, save the fact that our prisons are full to bursting. 1 in 5 of the 2.3 million Americans who are currently incarcerated are imprisoned because of drug charges, and Black Americans make up more than 40% of the U.S. prison population.

More like this
How to stay sober when everyone's desperate to party
By Tracey Anne Duncan
Here's how scientists plan to create a less addictive opioid
By Aaron W. Harrison
Tinder for anti-vaxxers is my actual nightmare
By Melissa Pandika
Stay up to date