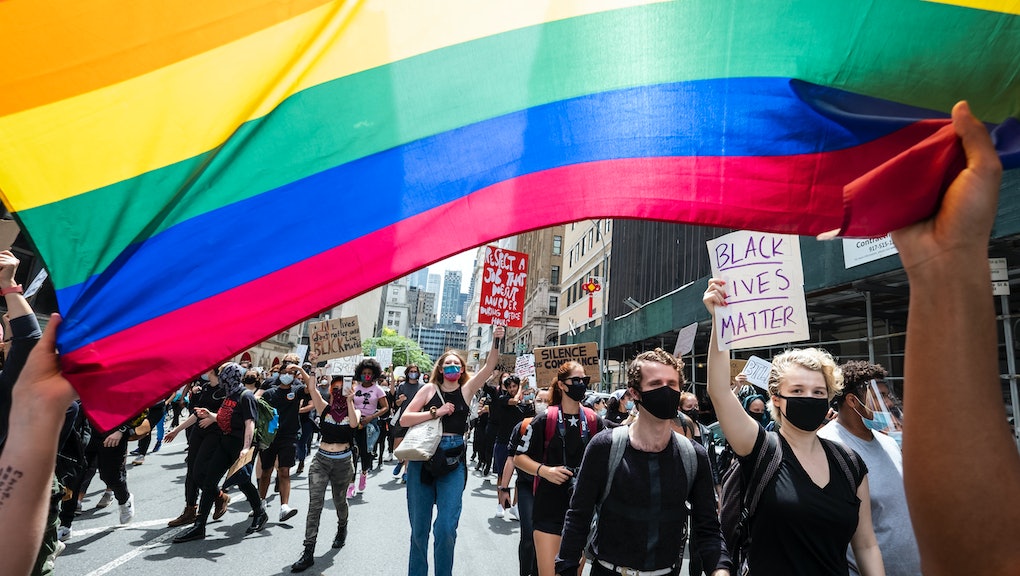 This wasn't the Pride we wanted, but it's still worth celebrating

I waited in line outside of the Sainsbury’s supermarket the other day — six feet apart from the other shoppers, all dutifully wearing masks — and when I reached the front I saw a small rainbow sign standing in the entrance. I was expecting a warning about social distancing, but instead it read: “We’re proud to serve the LGBT+ Community this Pride month and every month.”

Huh, I thought to myself. It’s Pride?

Some of my confusion has to do with the Groundhog’s Day reality we’re all living through, which has me trapped in the house doing the same thing day after day. Though the seasons have changed, in my mind it’s still March and this thing is going to be over in a few weeks. Now you’re telling me it’s June? No way.

No matter how you feel about the corporatization of Pride, I was shocked it took a bold declaration from a brand to remind me to celebrate my big, gay way of life. Usually my friends and I have been planning for months: what parties are we invited to, which will we actually go to, and what will we wear to each. If this were a normal year, I would buy a new especially gay T-shirt to wear in the West Village where I would hold court with a group of friends after the Pride Parade out in front of the Cubbyhole. That was always the best spot because you could see the breadth of the community — Latinx kids from uptown, gay dads from New Jersey, trans people in head to toe rainbow. It also never hurt that the Cubbyhole’s owners would come out with free rainbow-colored Jell-O shots throughout the day.

That’s what Pride has always been about to me: gatherings of people. Yes, it is a celebration of our hard-won civil rights and the LGBTQ people who have come before me who made my freedom possible. But what made that celebration so special were the LGBTQ people, no matter their age, shape, color, or sexual preference, and being cheek to jowl with them on a Manhattan street. Pride was sharing poppers on the dance floor followed by making out with a handsome new friend at a construction site. Pride was about hugging every acquaintance you met along the parade route. Thinking about doing any of those things right now, under the specter of coronavirus, gives me the heebie-jeebies. (Note to self: Heebie-Jeebies is a great name for a party.)

And I’m sorry, but Zoom Prides are not going to cut it for me. Yes, this Saturday’s Global Pride, the first entirely online international Pride event which will feature musical performances and political speeches, means well but it feels more like watching a movie than being there. There’s something that crackles in the air at Pride that just won’t happen all alone in my living room. Zoom fatigue is real! Also, they have yet to announce Deborah Cox as a performer. If there’s no Deborah Cox performance, can you even call it a Pride?

Then, in late May, as the Black Lives Matter protests once again rocked the world, Pride seemed even more irrelevant. How could we celebrate our rights when so many of our Black and Brown friends and partners do not have theirs? Something more immediate, something more important than Pride came along, and if I was going to leave my house and be in a sea of people for anything it would be to protest systemic racism, not to do something as frivolous as have a gay old time.

The Prides I enjoyed in the past are just that: a thing of the past, and Pride in the future might be different but better.

At first I thought we should just cancel Pride altogether this year in solidarity. But the BLM actions have actually dovetailed with Pride quite nicely. There was a march for Black trans lives in Brooklyn that drew a crowd of thousands. Black queer icons who were instrumental to the gay movement like Marsha P. Johnson and Bayard Rustin are finally getting their dues. And a GoFundMe for homeless Black trans women went viral, raising more than $2.5 million for the cause.

And throw into all that the recent Supreme Court ruling that says LGBTQ people can’t be discriminated against in employment, and there are plenty of reasons to rally. Just because Pride is different this year doesn’t mean that we should forget it, and it doesn’t mean we don’t have reason to celebrate.

This might not be the Pride we want, but it’s the Pride we’re getting. And hell, the bleak conditions this year might even lead to improvement. Future celebrations might be (and should be) more diverse. The thrill of being part of the community will be even more intense now that it has been denied. While I look down my nose at an online Pride event, someone who lives in a town without any Pride celebrations might watch online and have their life changed forever.

This year’s Pride is different, but then so is every Pride. Every year we take small steps toward progress, small steps toward equality, and with that the world looks totally different. The Prides I enjoyed in the past are just that: a thing of the past, and Pride in the future might be different but better. Just promise me that there will always be poppers on the dance floor.