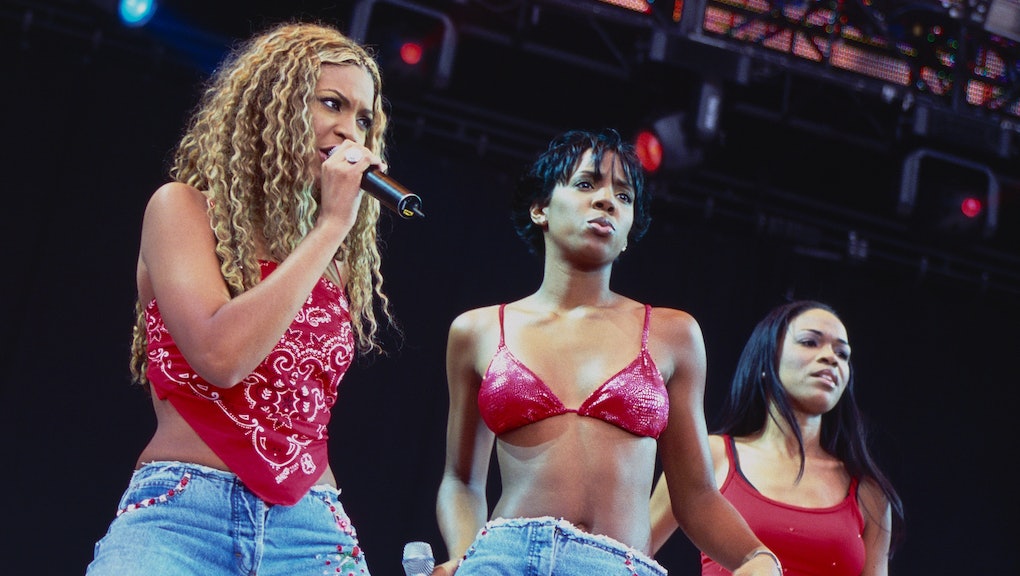 The music industry is heading backwards in the best way possible. TLC has become the latest legacy act to take the nostalgia on the road with their announcement of an 18-date Celebration of CrazySexyCool Tour commemorating the 27th anniversary of the group's classic 1994 sophomore album CrazySexyCool. To keep fans in a perpetual state of '90s bliss, TLC will be accompanied by the gangster harmonics of Bone Thugs N Harmony along with a promise of surprise guests, which opens the door to more choreographed dances down memory lane.

Jermaine Dupri produced four of CrazySexyCool's 16 tracks, so him popping out to do a medley of his own '90s hits is not only in the realm of possibility, but could open a time portal for Da Brat, Mariah Carey, and Usher to come through performing their J.D.-produced '90s bangers. While it's unlikely there'll be a hologram Notorious B.I.G. performing his Bones Thugs-N-Harmony collaboration "Notorious Thugs" the same way a digitally-resurrected 2Pac performed with Dr. Dre at Coachella in 2014, don't count out Cleveland's finest rap group ever.

In the last few weeks, the past has started to make the future of 2021 more exciting. A few days before TLC's announcement, Wu-Tang Clan generals GZA, Raekwon, and Ghostface Killah announced their 25-date 3 Chambers Tour, where they'll each perform their respective epochal debut albums in full, starting in October. A week before all of this transpired, millennials found out they'd also get their chance to relive their teenage love affairs with their favorite music crushes this fall after G-Squared Events announced the Millennium Tour 2021 will be back in October with a lineup featuring Bow Wow, Ashanti, Omarion, Soulja Boy, Lloyd, Sammie, Pretty Ricky and the Ying Yang Twins. In the middle of all of this nostalgia chaos, a teeny bopper fever dream manifested in real life when members of N'Sync and Backstreet Boys formed the super boy band with the offensively uninspired name Back-Sync and performed at a "nostalgia-fueled game night" known as Bingo Under The Stars on June 18.

After that performance, the man boys of Back-Sync hinted at possibly touring as this boy band fusion, and they should because one of the hottest commodities in all of the world today is nostalgia. Whether it's spiritual sequels of '90s horror films, a re-recorded Taylor Swift album outselling new albums, or museums being built house game show history, the world has been clamoring for that old thing to come back since the pandemic started. Swizz Beatz and Timbaland's virtual song celebration VERZUZ was propelled by this fact, with their most popular battles coming from '90s favorites like Brandy, Monica, Ghostface Killah, Babyface, Erykah Badu, D'Angelo, and the late DMX.

Since fall is the time for nostalgia tours, there are a few dream acts that should gift fans with one last chance to see songs they grew up on performed live. Jay-Z and Nas both released classic albums — Reasonable Doubt and It Was Written, respectively — 25 years ago and have each begun commemorating those anniversaries with NFT releases and re-issues. They should up the ante and do a nationwide tour with each performing their albums in full. Nas could even come out and rap the chorus to Jay-Z's "Dead Presidents II," which samples Nas's "The World Is Yours" as they did at Jay-Z's I Declare War concert in October 2005 when they publicly squashed their beef.

This year also marks the 20th anniversary of Destiny's Child's Survivor album. Although seeing Beyonce in public is a privilege tantamount to seeing the President of the United States, she has made an exception for Destiny's Child reunions over the last eight years. If performing for a few minutes at the Super Bowl in 2013 and at Beyonce's unmatched Coachella performance in 2018 is any indication, we may be due for Destiny's Child to hit the stage together again.

One thing is for certain, if these dates turn into sold out shows across the country, the music industry may soon make fall the season of nostalgia tours the way summer is when festivals reign supreme. It might be time to dust off that Now That's What I Call Music! CD.