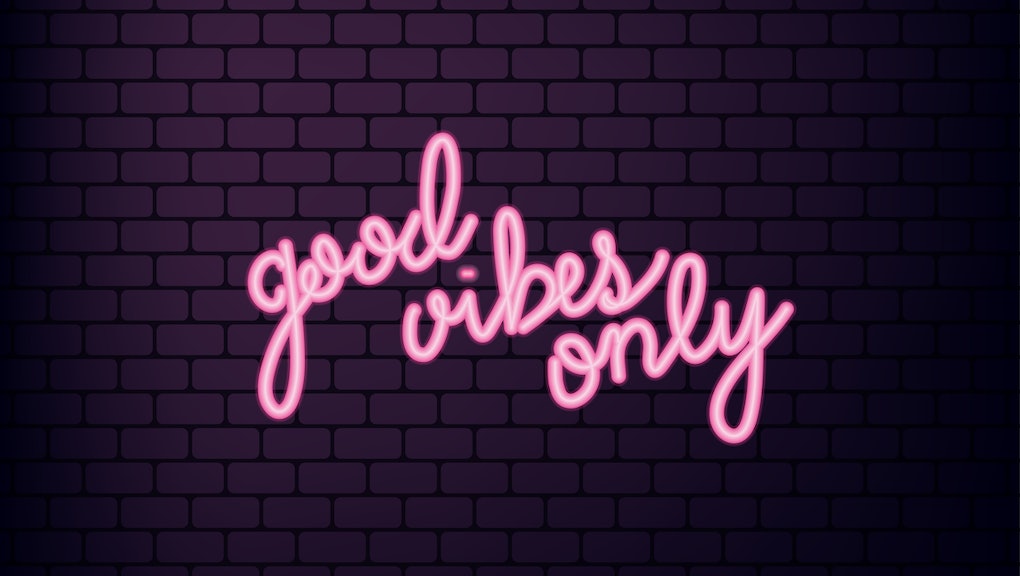 Toxic positivity: The emotional toll of trying to be happy all the time

“You need to focus on the beauty in your life. Don’t waste this precious life in tears,” another yoga teacher told me when she saw me crying during savasana. “Move towards the light.” I stared at her, unsure how to respond. I was experiencing the break-up of a ten year relationship. I was sleeping on a friend’s couch. I didn’t have a car or money and I had a terrible cold. Yoga was the place I went to become a better person and this person was telling me that it was not okay to be sad. I felt so confused. This, my friends, is toxic positivity, and it is not okay.

I didn’t know that it wasn’t okay then. Comments like this made me feel confused and guilty about grieving my losses. Not being able to talk to people about sad things made it all feel worse. I wore a smile, but it felt like a gag. On the outside, I looked like everyone’s favorite manic pixie dream girl (heavy emphasis on the manic), but on the inside I was choking on the overwhelming sadness I felt.

What’s worse, not only did people love the fake smiling version of me, I got extra credit for powering through difficulty like a champ. It took a lot of whiskey to keep that smile on my face at social events in the year that followed. I went out and partied all the time. I had just gone from years of cohabitation to living alone, so I felt like I really needed to be around other humans, but I ended up feeling more alone than ever.

On the outside, I looked like everyone’s favorite manic pixie dream girl, but on the inside I was choking on the overwhelming sadness I felt.

There’s a very good reason that other people’s gaslighting positivity had me feeling so lonely. “You can’t feel close to someone if you can’t share negative emotions with them,” says Aimee Daramus, a Chicago-based psychologist. “You’ll never truly feel loved by another person if you can’t be sad or scared or angry around them. It’s how we bond.” We talk all the time about wanting to “feel seen,” and what we mean is that we want to be seen in our complexity, even when it isn’t pretty. Feeling loved means feeling like we can show our whole messy selves to each other.

This isn’t some soft pop psychological theory. It’s science. “When we can share authentic feelings, the mirror neurons, which are the cells that help us love and empathize, start to fire and we feel safe,” says Daramus. And, she explains, oxytocin — a hormone that heightens feelings of trust and intimacy — is released when we feel nurtured or nurturing. It’s released during orgasm and also childbirth. When we feel the rush of happy love feelings, it’s due, in large part, to the effects of oxytocin. It’s not just the brain that feels the benefit. Oxytocin also creates physical relaxation. Some scientists have started calling it the “cuddle hormone.”

Sharing sadness, then, is a healthy human social behavior. And crying is one of the ways that we get there. Not only that, but crying has a healing effect. Tears have an antiseptic protein that destroys bacteria that is dangerous for our immune systems, so not crying can literally make us sick. And even though it can be really satisfying to cry into a pillow alone to Lemonade, most of the time, crying is a social habit. It’s a way to create that interpersonal bond. Emotional crying is a uniquely human behavior meant to elicit compassion and assistance from others. You won’t likely be able to actually “get over” hard times without sharing them with other people.

“When we share our sorrows, fears, and frustrations with trusted others, that engagement creates feelings of connection,” says Laura Lee Townsend, a California-based therapist. “That feeling of connection — of being heard and understood — then reduces the very negative feelings we were trying to avoid in the first place. Acknowledging and observing our negative emotions actually helps us move through them with a little more ease and grace.”

As a yoga teacher, I always tell my students that they have to feel their feelings while they’re real and present or they will turn into hybrid monsters that pop up unexpectedly later. (Yes, I really say things like that.) My logic is that if showing your sadness allows you to create healing bonds with others, there have to be negative effects of not showing your feelings. Townsend backs me up 100%: “Walking around pretending like we don’t have negative emotions can create all sorts of psychological and physical problems."

Suppressing your negative emotions can lead to a host of ailments that might seemingly have nothing to do with the original cause of sadness.

“It's stressful on your mind and body to be in a state of denial,” says Townsend. Suppressing your negative emotions, she adds, can lead to a host of ailments that might seemingly have nothing to do with the original cause of sadness. “Negative emotions that have been shoved away can lead to unexplained stomach ailments, headaches, migraines, chronic fatigue, anxiety, depression, or increase the risk of abusing alcohol or drugs.” Those are the hybrid monsters I was talking about.

Yoga studios are full of “good vibes only” types, but nowhere in the yoga sutras, one of the primary texts of yoga, does it say, “only think positively.” What it says is don’t get attached to your feelings, whether they feel good or bad.

Don’t try telling that to the ever-smiling yoga bro (of any gender), though. Instead, if you have to deal with toxically positive people, Daramus suggests letting them know that expressing negative emotions allows you to feel like you can be real with them. And if there’s anything the good vibe tribe respects more than positive affirmations, it’s being “real.”

This article was originally published on Dec. 11, 2019

More like this
Should vaccinated people wear masks indoors?
By Peter Chin-Hong
This white woman called herself the Queen of Congee for “improving” a 3,000-year-old Asian staple
By Joseph Lamour
How to embrace body acceptance without being ableist
By Melissa Pandika
Stay up to date