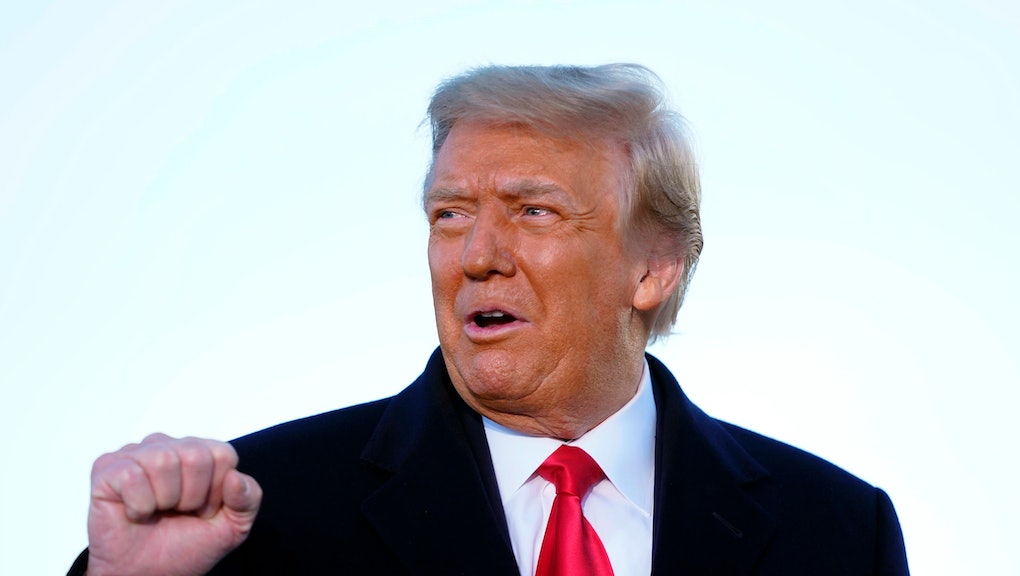 Trump accomplished almost nothing, but he changed America dramatically

In the final minutes of his presidency, just moments before he boarded Air Force One to jet off to his Florida resort, tail tucked firmly between his legs, a decidedly downbeat Donald Trump offered the following assessment of his past four years in office:

It's the sort of cliche refusal to acknowledge reality that came to define the Trump administration — one echoed the previous evening during the president's pre-taped final address to the nation, in which he insisted that "we did what we came here to do, and so much more."

While it's clear that Trump has been an unimaginably consequential president — someone whose simply having become president in the first place managed to warp the country's political reality beyond recognition — it's harder to put a finger on just what he managed to accomplish legislatively. Yes, he managed to push his ultra-nationalist, xenophobic, debilitatingly corrupt agenda forward with a flurry of administrative policy changes, symbolic gestures, and executive orders that strained the limits of presidential authority. But in terms of lasting legislative victories? The kind that are codified into law by Congress, and not subject to the whims of next guy to take the job? Despite his bloviations to the contrary, Trump's record has been conspicuously thin.

To be sure, there have been some congressional victories. That Trump's signature legislative achievement, the Tax Cuts and Jobs Act, ended up being a trillion-dollar boondoggle doesn't take away from the fact that it was — and remains — a major notch in the president's belt, and the fulfillment of years of conservative political machinations. Likewise, the president's championing of the First Step Act — a comparatively incremental, but still significant step forward for criminal justice reform, was one of the few bipartisan congressional accomplishments of his time in office.

But consider the issues he himself chose as his defining political priorities: building a wall for which Mexico would pay; barring immigration from majority-Muslim nations; taking on tech giants and social media platforms; going to, and then militarizing, outer space. Yes, to varying degrees he accomplished each of the above, but he did so by extension of his own presidential authority — the sort of authority that can (and in many cases will) be reversed by the incoming Biden administration.

Trump's ability to amplify and skew the worst this country has to offer has been a testament to his understanding of soft power — the sort of influence that comes not from writing laws ... but from kicking the Overton window to pieces.

Consider the wall, Trump's single most identifiable campaign promise-turned-administrative prerogative. To the extent that there has been any actual construction done, it's been largely (although not exclusively) refurbishing existing sections of border fencing between the United States and Mexico. And despite the president's oft-repeated mantra that "Mexico will pay for it," much of the wall funding has been money diverted by the administration from the Defense Department. While there has also been congressional action on funding the wall, it's often been folded into larger, virtually unstoppable, omnibus bills. And the most impactful outcome of Trump's onetime willingness to go to legislative bat for his pet project was the longest government shutdown in American history.

And, after all that, Joe Biden plans to simply halt wall construction altogether within his first 24 hours as president. Same with Trump's perpetually litigated Muslim travel ban, his withdrawing from the Paris climate accords ... the list goes on and on. The Trump administration never unveiled a concrete health care plan, never followed through on the grand infrastructure overhaul that all those Infrastructure Weeks promised.

This is not to say that Trump has not had a lasting, and expressly deleterious effect on the country. He has. But his warping of how we understand our country, his moves to ostracize and harm and endanger the most vulnerable among us, his enabling of some of the worst villains in American public life — these have all been as much a result of his sheer force of personality as they've been any sort of hard fought political battle. If anything, Trump's ability to amplify and skew the worst this country has to offer has been a testament to his understanding of soft power — the sort of influence that comes not from writing laws, or even temporarily adjusting policies, but from kicking the Overton window to pieces, and steadfastly rejecting the rules of civility that guided his predecessors.

If there's a legacy to Trump's time in office it's not one that will be recorded in the congressional record, or enshrined into law. It's a legacy of exerting personal — and temporary — power in the service of changing the very fabric of our political reality. Trump's accomplishments, such as they are, will be assessed and untangled and adjudicated accordingly in the coming administration. But his impact — the thing that made him a consequential president — will be with us for years to come.